Here’s a fantastic project that you can do with your toddler or guide an older child to complete themselves that involves minimal cost and effort to prepare. The idea for this project came about whilst we were making the Tissue Paper Sun-Catcher Butterfly, and the …

Since Darwin was a few months old I have always tried to encourage him in mark making and exploring colour with art materials. We have progressed on somewhat from our first experiments with making baby-safe cornflour paint, and now that our young one is less …

For reasons best known to Nana herself, my mother decided to buy my little boy no fewer than 38 big bottles of brightly coloured paint and a whole 70s disco worth of glitter for Easter, so we have been getting our art on these past couple of weeks (it was a rather early Easter gift). My little boy mostly likes to paint with his hands, dipping them into all the colours to make a multicoloured swirl of paint soup, then slamming them down on the paper whilst shouting ‘splash’. I remain calm as he then runs his hands through his hair, slaps his little chubby digits onto his cheeks and then finally picks up his paint brush, dips it quickly in the mud of paint and then dabs it to his forehead a few times before declaring ‘finished!’ This is the art of toddlering. 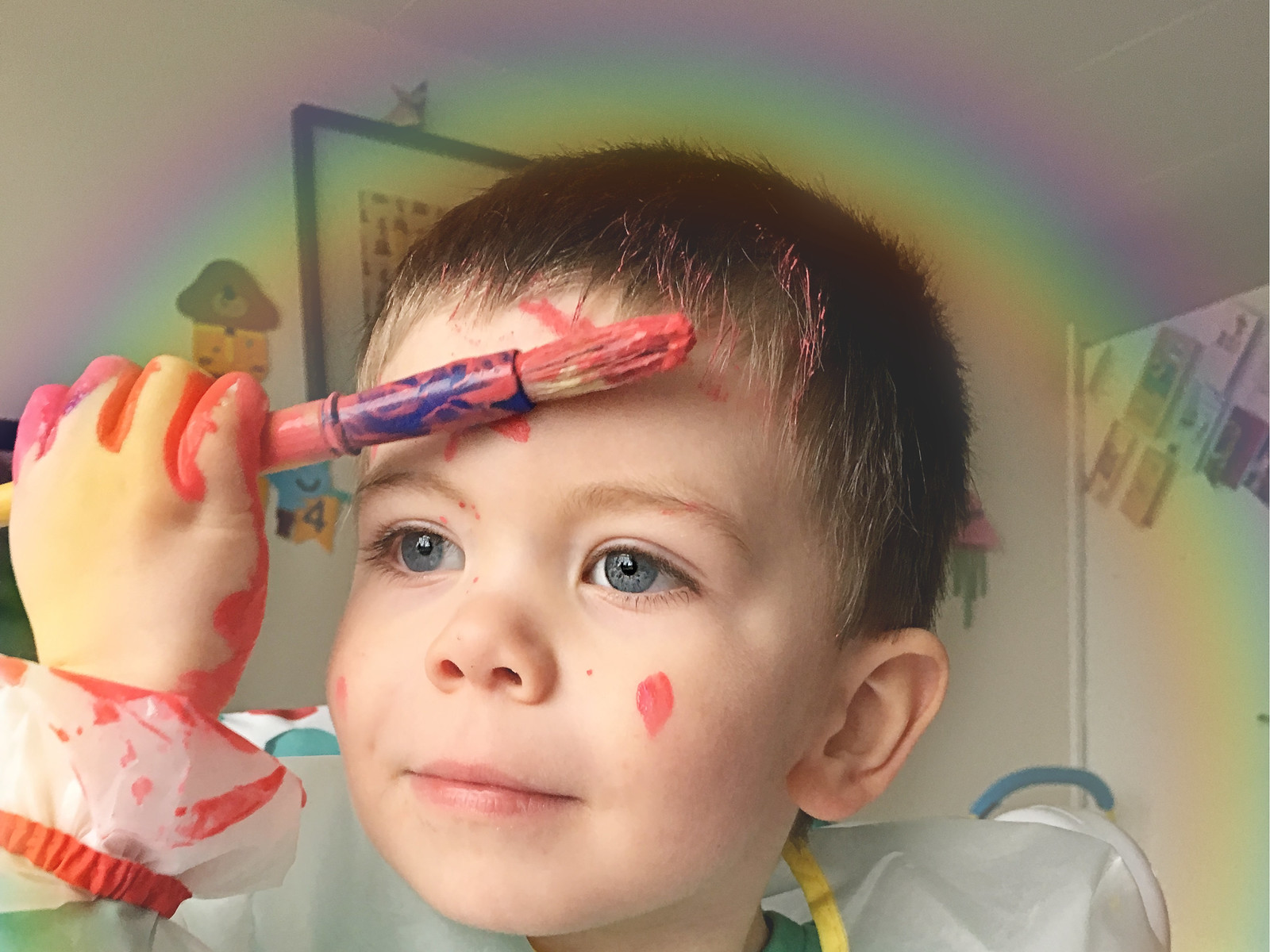 I bought an art smock a while ago, but it was not cutting the mustard any longer. The cuffs were a bit restrictive, and it was a bit too plastic-fantastic to be comfortable, especially with the warmer weather of spring oh-so-slowly approaching, so I looked online for a hardwearing fabric alternative. I looked and looked. They just don’t seem to exist. In the end I decided to make one. Finding instructions or a pattern for a simple art smock was no less difficult, but eventually I tracked one down to an Oliver & S book called Little Things To Sew.

I had a look through my scrap fabrics and decided that I could just about squeeze two sets of the 3-5 year smock front and backs out of a remnant from my Vonn Trapp sofa dress, if I cut the fabric very creatively and reduced the width ever so slightly. I had just enough black cotton to provide four sleeve pieces and a couple of patch pockets, too. My little boy is 2½ and his little friend that I made a matching one for is approaching three. I didn’t think making the smaller size would have been worth my time for the short amount of use my wee one might get out of it, so plumped for the larger size for both. 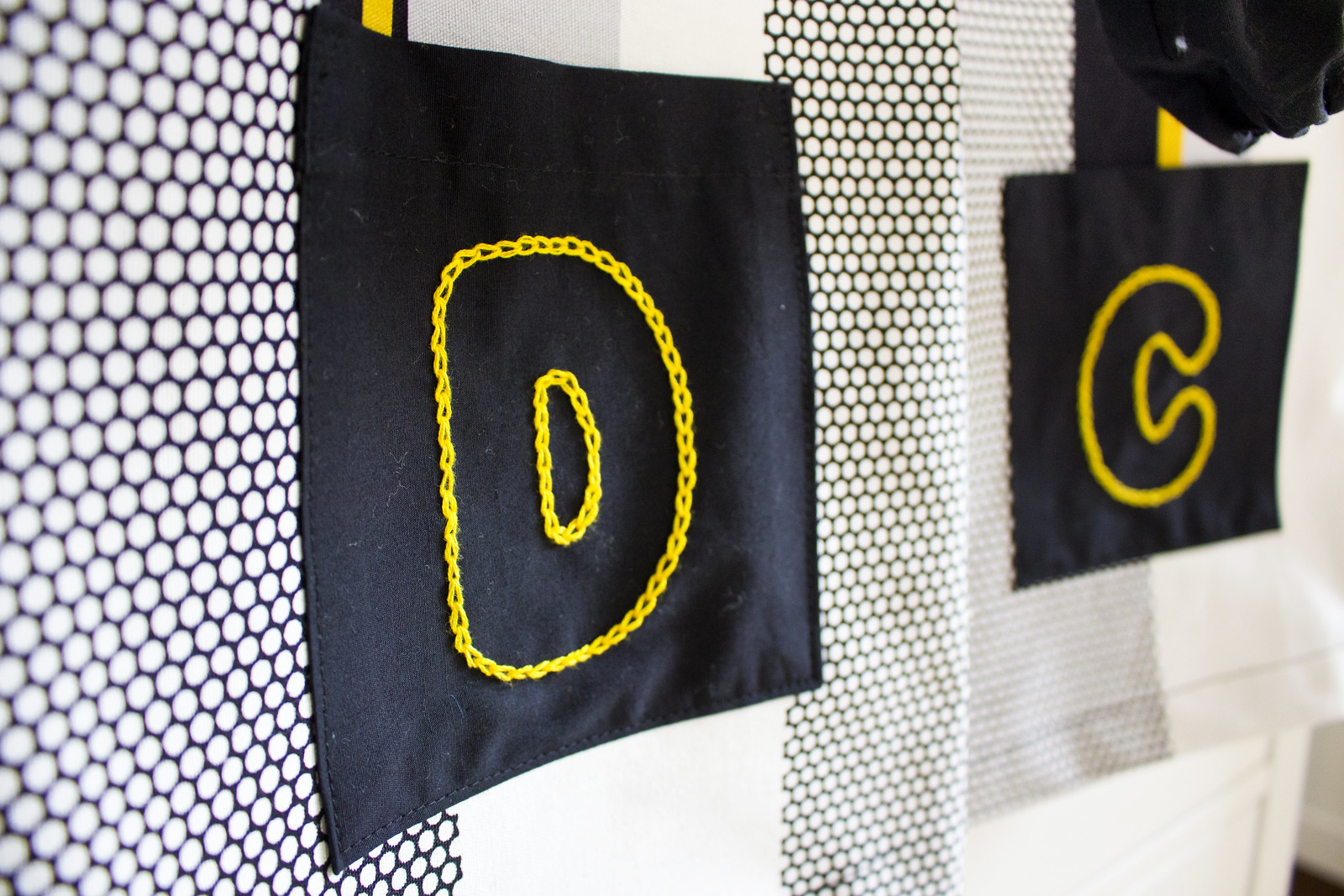 I don’t really think there is that much use for the pockets on the smock, if I am honest, but as I just about had enough fabric for one pair of pockets, I decided that I would give each smock a single pocket and embroider in a chain stitch a simple initial for each child. I have never really done any embroidery and didn’t have a hoop, so the embroidery is not perfect, but I think matching the yellow to the feature colour of the fabric actually really helped to complete the finished project, and I’m glad I took that quiet bit of time to add the detail. 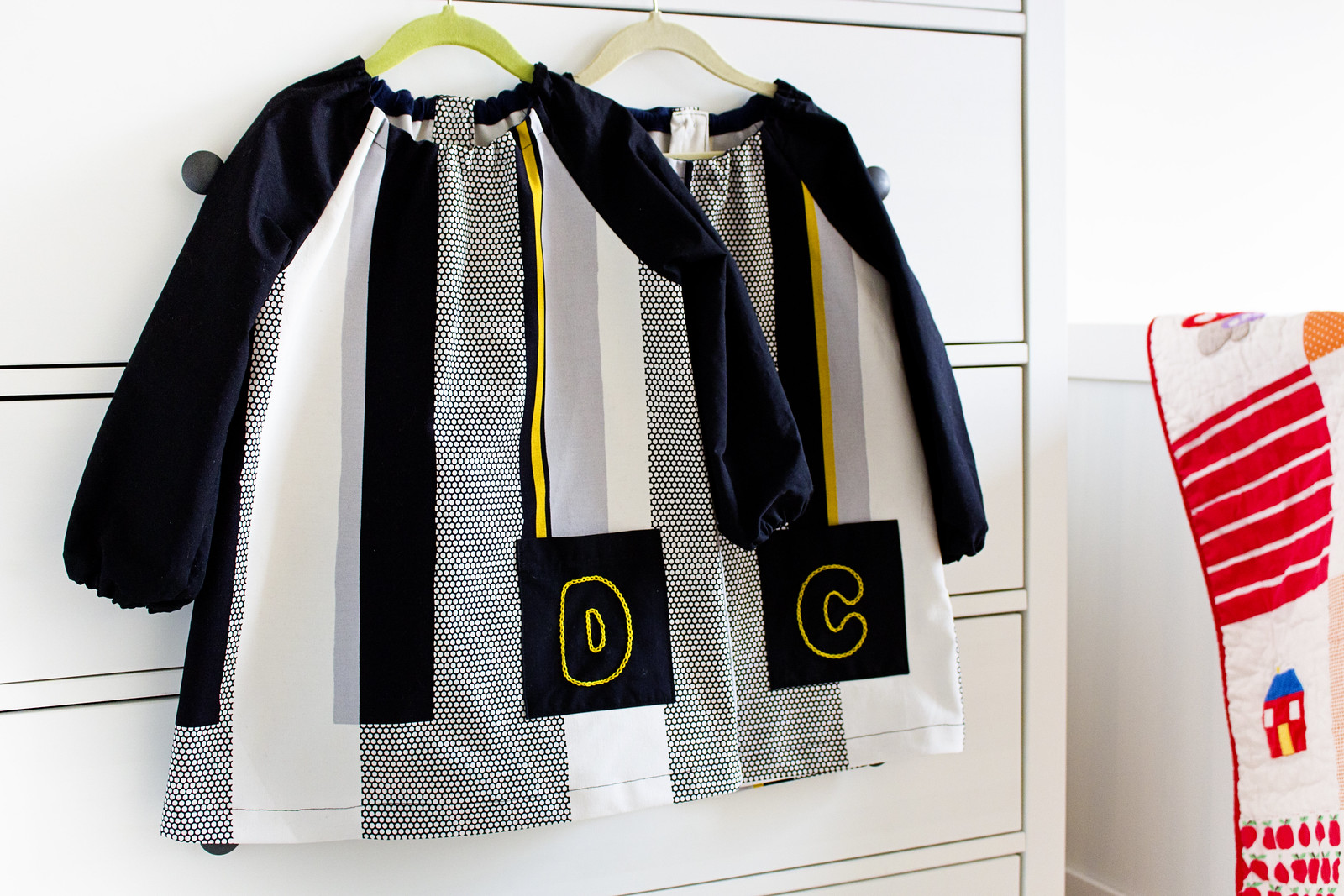 The smock pattern from Little Things To Sew has a simple and generously sized raglan sleeve. This makes it a doddle to piece the smock and provides a nice amount of roomy fabric for those wild artistic gestures from your own little Jackson Pollock. At first I suspected that the raglan seams and elasticated, gathered neck were slight short-cuts to fit, but really they work very well in a garment that is more for function than style. That’s not to say that there is a sloppy level of finishing to these smocks. The pattern gives instruction to sew the smocks with French seams¹ throughout. I don’t even know that my wedding dress has a French seam treatment, but it does give a fabulous finish to the unlined smock, and  isn’t really much more work than finishing a seam after sewing, so I’m glad I didn’t skip them. 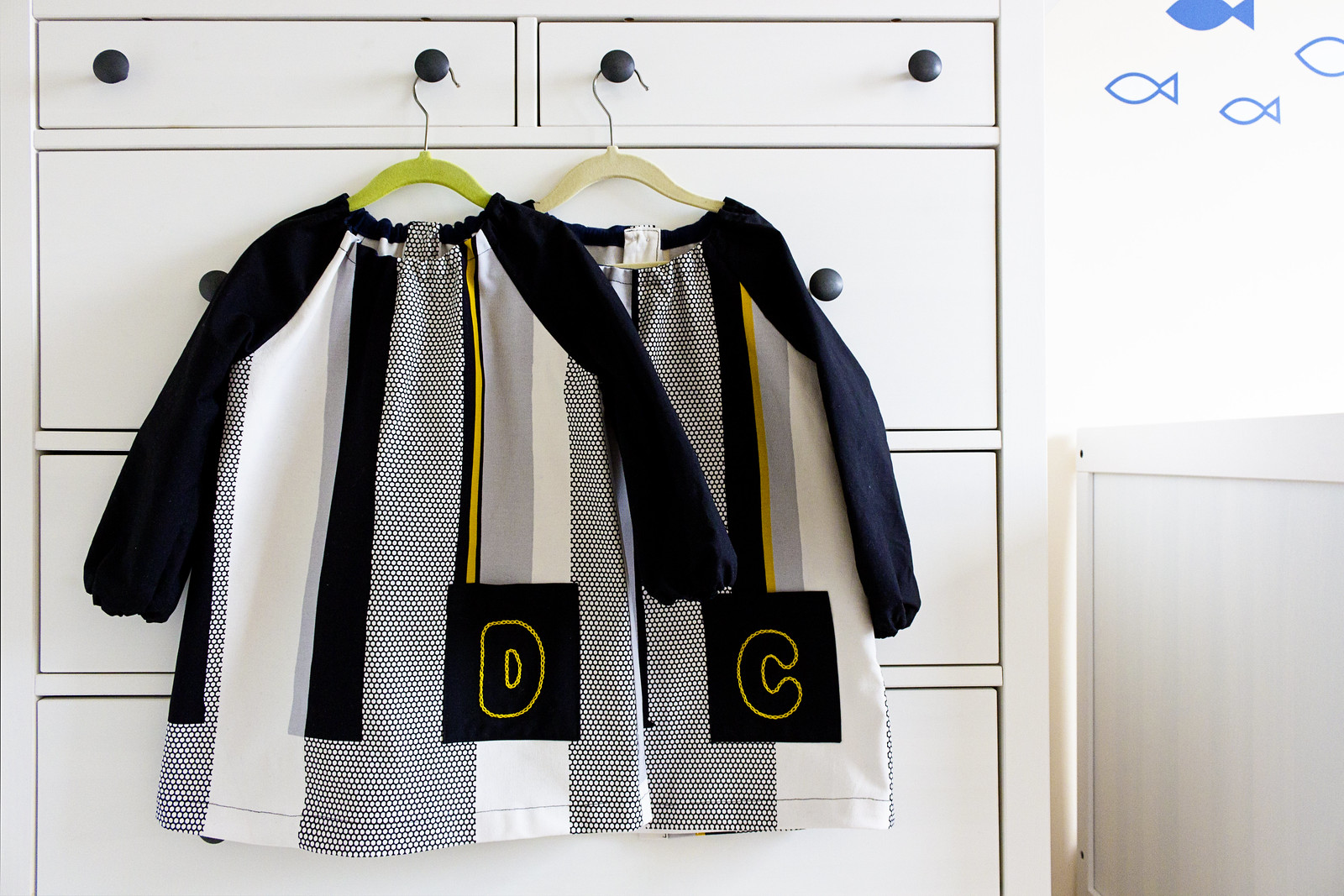 I used a heavy, 100% cotton canvas-style upholstery fabric that I’d previously used to make myself a dress for the main fabric. A similar weight to denim, it’s hardwearing and I thought would be good at stopping paint seepage. The sleeves are made of a lighter cotton for comfortable and non-restrictive arm movement, hopefully in a less paint-prone area. As the gathered neckline in the heavy weight fabric would be bulky at anything other than single layer thickness, I put my big girl panties on and made some 2.5cm/1″ binding out of a lightweight cotton knit fabric to add a nice, soft comfortable inside edge against the neck on the elastic channel. I don’t want to make binding on my best days, but making it out of such a fine knit made me want to go all she-hulk. However, like many fiddly jobs, it was worth it in the end product.

The back of the smock is left mostly open, so it gives perfect lap coverage when sitting down. Fastened with a single large press stud at the back of the neck and with elasticated cuffs, its simple to just pop on before a painting session.

Would my son wear it though? Hahahaha…

He Hated His Smock

After a long think about why showing him the smock made him run off crying (literally… he ran off into his room, shut the door and bawled his eyes out…) I decided that it perhaps was  …  …  something to do with his first week at nursery.

After his first session or two at nursery (he’s been going for four weeks now) I noticed that my little boy had come back with a bit of bruising and small areas of bleeding around his neck and ear. I’ve found this process ever so difficult… not knowing exactly what has gone on in those hours we are apart for the first time in our life together. It disappeared after a couple of days and he’s been fine, and is settling slowly into the routine of attending two sessions a week. He’s come back absolutely covered in paint, though, which I thought was odd as I know they have painting smocks at the nursery.

My completely surmised guess is that he has, in those first couple of upsetting sessions away from mummy and daddy, somehow hurt himself putting on or taking off his smock/apron. I may be wrong, but it would sort of explain his ability to paint his jumper so completely, as well as his smock aversion.

When All Else Fails, Yoghurt

After identifying the problem (smock hate) I formulated a solution. Yoghurt is always the solution. You can bribe anything with yoghurt. Look, sweet child, if you wear this smock you can eat yoghurt in it! Yes, he cried a little, but blomp the smock straight on his head and his arms in the sleeves in one easy action and before he has time to complain he has a yoghurt in his hands. I know him well enough to reason with him that though I know he’d like to be complaining about his smock that he can’t complain and eat yoghurt at the same time. And this is how we have come to accept my role as parent. I spent the entire duration of the yoghurt-eating espousing the amazing qualities of his painting smock and a short while later he and his super-smock had made peace and he wore it for the rest of the day because it is actually awesome. We have decided.

¹ French seams are formed by first placing the two pieces of fabric to be joined with wrong sides out and sewing a seam line. Excess fabric is trimmed close to this line, and then the piece is turned inside out and pressed so that the right sides are now facing on the inside. The seam is now sewn for a second time to encase the raw, trimmed edge. The seam allowance is now self-contained within the inside of the garment.