Knitting April Into May

I have been taking part in the first three months of the A Year Of Techniques project being run by ACKnitwear: a year of monthly projects which each focus on a new technique. Starting in March, the first month’s technique, helical stripes, offered up a …

As one project hits the blocking mats, so another springs back to life. These are the socks that I was working on a little while ago, before I had a little craft and creativity inspiration ‘blip’ and my hands stopped working and my mind stopped …

Do You Block Socks?

I block socks as a matter of practice. Firstly, I think it is a good idea not to lave them wet and crumpled to dry slowly, but would rather get the air circulated around the shaped fabric to dry quickly and efficiently. Also, they pack neatly into the sock drawer a lot easier.

But though I have made Mr Awesome two pairs of custom fit sock blockers, if he takes the laundry from the machine he never blocks his socks. One of his pairs of hand-knit socks ended up being split across two wash loads last week. I dealt with one, whilst Mr Awesome saw to the other load. Have a guess at which one I washed and dried. 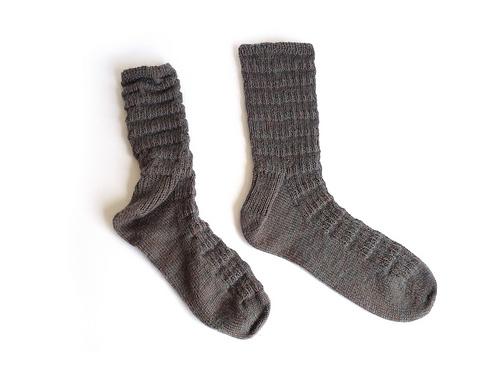 But one thing that has often been asked is if blocked socks are more comfortable? Mr Awesome’s verdict was that he couldn’t really tell the difference and that they were both equally comfortable and equally easy to put on.

I’ll still block them, though. They look prettier.

I only have one pair of mittens, so they get almost constant use during the autumn and winter and are invaluable when the big freeze has settled in as it has now in the UK. I designed and knit these Flutter Butterfly Mittens in August …

When I made my first pair of mittens a few years ago I came across the problem of how to block them. Nowhere I looked seemed to have any information on the best way to block mittens: should they be pinned out flat or simply …

It’s been quite a while since I completed the knitting for my colourwork bag as I have been waiting to buy some lining fabric and handles. I’ve been searching for them for quite some time, but none of the craft or knitting/sewing shops that I have visited have had any suitable bag handles, and I am rubbish at choosing fabrics. I’ve spent far too long looking blankly at bolts of fabric wondering what on earth I wanted. But I’ve trawled eBay and a suitable pair of handles and a yard of fabric are on their way. Whilst waiting I thought it was time to block the bag. 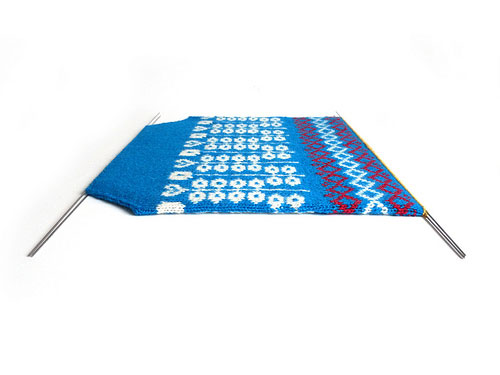 I used blocking wires along the top and bottom edges to try and help ensure that the upper edge and base of the bag are kept as straight and sharp as could be. 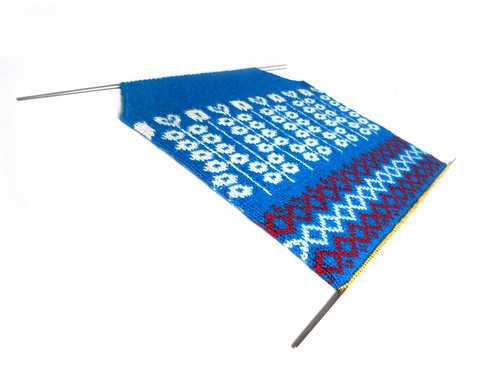 The yellow stitches at the bottom edge of the bag are provisional cast-on stitches knit in a contrast colour to be removed when closing the bottom of the bag. I shan’t do this for a while in order to leave the bottom edge free for when I embroider the details on. I was nervous about removing the blocking wires in case the knitting rolled uncontrollably, which would make the embroidery very difficult to manage, but it has remained completely flat. 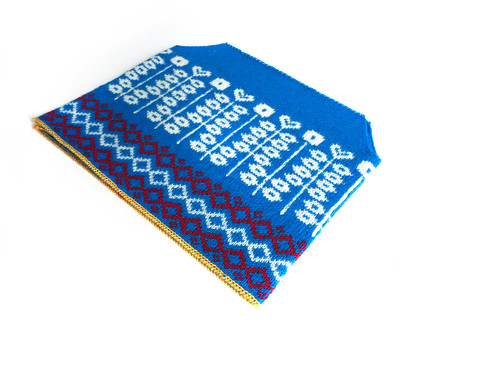