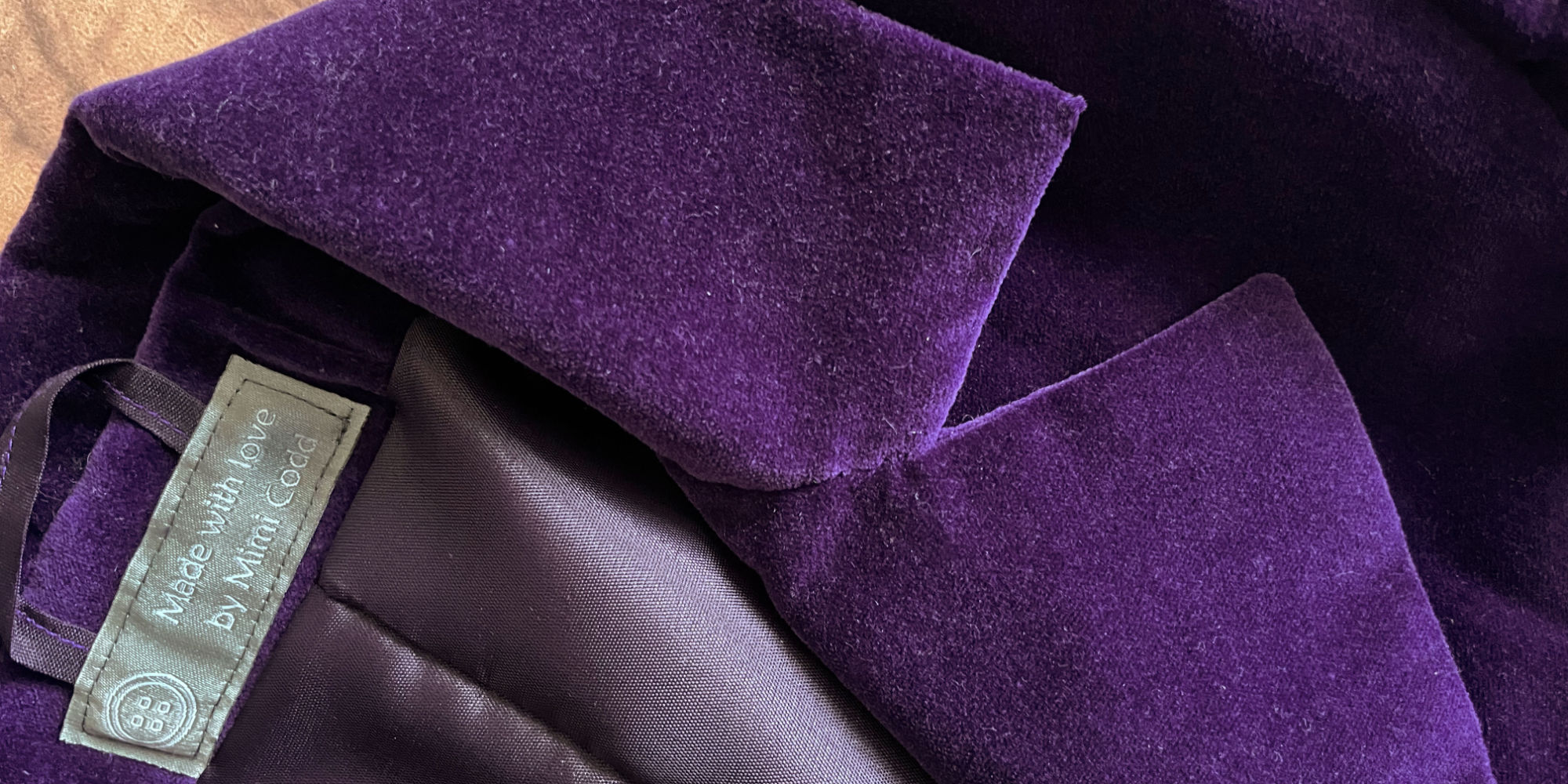 We Are The Dreamers Of The Dreams

Last year I decided to make what I decided was going to be my magnum opus in terms of the things I have or will ever make, and it was a Willy Wonka costume, of all things.

It came about after a post on Twitter where people were asking what was the greatest coat of all time, and I posited the fact that it is Gene Wilder’s coat in Willy Wonka & The Chocolate Factory. A purple velvet Edwardian frock coat with wide 70s lapels, the original film prop sold for $70,000 in 2013, and is rightly an icon itself.

As it happens, the Twitter discussion happened to come about a number of weeks before World Book Day, and before I even had a definite plan I was ordering velvet samples.

Though I had a deadline, I didn’t rush the making of the coat. It took me many days to cut the fabric, a 100% cotton velvet outer fabric and satin lining, and weeks to sew the coat, piece by piece. If I recall correctly, there were 38 pieces from the outer velvet fabric alone that I needed to cut from the velvet, with almost the same number again making up the inner lining.

I had never really sewn with velvet before, apart from when making a simple set of Christmas stockings, so I was unsure as to how difficult I might find the sewing of the coat, but actually the velvet presented no challenge at all. Maybe it is because I chose a 100% cotton velvet, or maybe it is because I hand basted every seam before sewing it (because I found it more relaxing and hate dealing with pins) but I found it no more of a challenge that sewing with any woven cotton. I would hand baste a seam or two, and take them upstairs to sew, come back downstairs and baste another seam, and so on. I found it relaxing, exciting, and it helped me get my step count in for that month.

Piece by piece I assembled the coat, triple checking the nap of the fabric with every panel I joined until it was finished, lined and a label sewn in.

The coat is finished with self-covered buttons. Sewing the buttonholes was the most nerve-racking bit. It always is. Everything is finished, and perfect, and I know that I have to rely on the magic of that little foot to make it all work, but also that I have to remember each of the steps: pulling down the little foot stopper, putting it in front of the doodad, or is it behind the doodad?

“The suspense is terrible… I hope it lasts.”

The buttonholes came out perfectly, and I felt like maybe I was in fact a genius. I even spaced them perfectly.

So, the coat was finished, and I had achieved my dream project, but “where is fancy bred, in the heart or in the head?”. Though the coat project came from the heart, my head said that my six year old would likely want the rest of the costume to go with it.

Taking the classic 1970s ensemble as a starting point was important to me, because he is the recognisable Willy Wonka in this house. Though my then six year old had read the book a number of times, the coat belonged to the character portrayed by Gene Wilder, who himself had very particular thoughts on Wonka’s clothing:

I’ve just received the costume sketches. I’ll tell you everything I think, without censoring, and you take from my opinion what you like.

I assume that the designer took his impressions from the book and didn’t know, naturally, who would be playing Willy. And I think, for a character in general, they’re lovely sketches.

I love the main thing — the velvet jacket — and I mean to show by my sketch the exact same color. But I’ve added two large pockets to take away from the svelt, feminine line. (Also in case of a few props.)

I also think the vest is both appropriate and lovely.And I love the same white, flowing shirt and the white gloves. Also the lighter colored inner silk lining of the jacket.

What I don’t like is the precise pin pointing in place and time as this costume does.

I don’t think of Willy as an eccentric who holds on to his 1912 Dandy’s Sunday suit and wears it in 1970, but rather as just an eccentric — where there’s no telling what he’ll do or where he ever found his get-up — except that it strangely fits him: Part of this world, part of another. A vain man who knows colors that suit him, yet, with all the oddity, has strangely good taste. Something mysterious, yet undefined.

I’m not a ballet master who skips along with little mincy steps. So, as you see, I’ve suggested ditching the Robert Helpmann trousers. Jodhpurs to me belong more to the dancing master. But once elegant now almost baggy trousers — baggy through preoccupation with more important things — is character.

Slime green trousers are icky. But sand colored trousers are just as unobtrusive for your camera, but tasteful.

The hat is terrific, but making it 2 inches shorter would make it more special.

Also a light blue felt hat-band to match with the same light blue fluffy bow tie shows a man who knows how to compliment his blue eyes.

Hope all is well. Talk to you soon.

I started about the job of recreating the rest of the costume. The first difficulty was in finding a fabric that adequately represented the purple floral of the waistcoat, so it took me a while to trawl through websites until I found something that I thought would work. Gene Wilder was absolutely correct: lime green trousers are icky, and too cartoon-like, despite them being the original colour for the trousers as given in the book. The bow tie ended up a golden-hued beige, and works just beautifully, soft and billowy.

I made very simple pieces for these additional items, and after the weeks spent at the coat they seemed to be made in the blink of an eye. The self-drafted trousers took under an hour from laying the fabric out to cut, to being hand hemmed and pressed.

The iconic top hat was perhaps the item that I was most unsure about. Though I found the making of the coat daunting, I had sewn before, but this was my first foray into amateur millinery. I absolutely tried to buy a top hat, but any affordable options had domed crowns, more like a bowler hat, and the only flat topped hats I could find that looked to be the correct shape were both too pricey and black in colour. So I was left with the choice to either paint a pricey top hat or try to make my own, and I opted for the latter. I made the hat, in proper Blue Peter style, from felt and cereal boxes, and hand sewed the felt around the cardboard form. The first hat I made was very tall, and Gene Wilder was right, “The hat is terrific, but making it 2 inches shorter would make it more special“, so I set about unpicking the whole thing and shortening it by a couple of inches, and it really did make a big difference to both the style and its wearability.

With the entire ensemble complete I felt more content with a project than I had ever done before. It was a sort of bucket list project, the likes of which I will never make again, but I proved to myself that I could do it and I absolutely loved the process of making it. Watch the video with sound, because the music is magical.

There was one little touch that I thought would make Bean’s day extra special, because for one day he would get to be Willy Wonka, and what is Willy Wonka if he is not that genius who gives the world chocolate?

As the project had taken some number of weeks it was with only a couple of days to spare that I had the notion that of course Bean needed some chocolate bars to take to school.

“So much time and so little to do. Wait a minute. Strike that. Reverse it.”

— Willy Wonka, maker in a hurry

A case of 30 Dairy Milk bars were given bright cardboard wrappers and packed carefully in a handmade box, to hand out to the class, because everyone deserves a little treat, whenever they can find one, and the day was a very special one.

“Don’t forget what happened to the man who suddenly got everything he wanted….He lived happily ever after.”