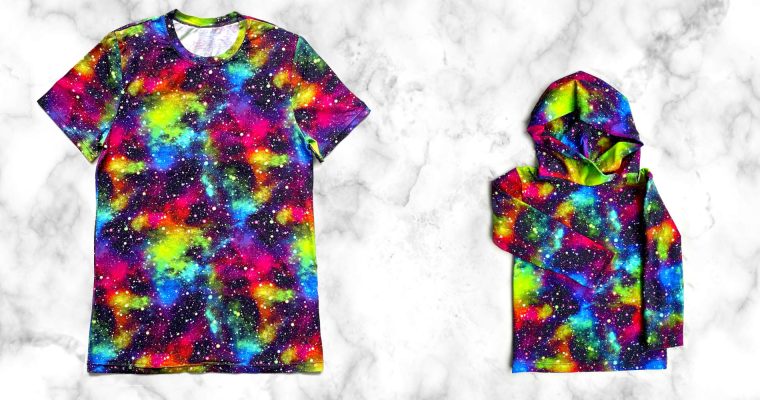 Some time ago I bought some extremely colourful rainbow galaxy print fabric, with the intention of making myself a top and a matching one for my seven year old. Wires got crossed along the way and Russell came to believe that I had bought the fabric to make matching t-shirts for our son and himself. I did initially set him right, but as Christmas was approaching I decided to go ahead and make some thing for each of them.

For Bean I decided on a hoodie, to make best use of the amount of fabric I had. It wasn’t enough to get a third garment from, but by cutting wisely I could get two hood pieces and some long sleeves, as well as lengthening both the sleeves and body for his increasingly tall and lean frame.

For Russell I made a simple t-shirt, with a drastically lengthened body. At over 196cm (6ft 5″) even the ‘tall’ range t-shirts don’t seem long enough on his frame, even though he is relatively short in the body and all the height comes from his legs. The only t-shirt he has that really covers as a t-shirt should is one I made a couple of years ago, so a second long t-shirt was a handy thing to make.

I just managed to squeeze both garments out of the fabric I had, leaving not even enough of a remnant for a pair of kids speedy pants, and keeping scraps to a minimum.

This make came entirely from my small fabric stash. As well as using stashed fabric, I used the Longboard Tee pattern for the men’s t-shirt, and the Eclipse T-shirt and Dress pattern with lengthened sleeves for the hoodie; both patterns that I already owned.