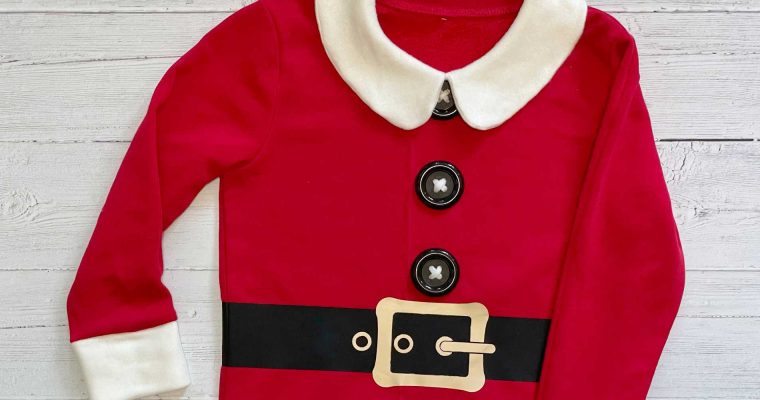 A quick project for school Christmas Jumper Day was in order as the Father Christmas jumper I made for Bean in 2020 was too small after two years of very fast growing. After asking what kind of seasonal sweater he was after Bean decided that he really did like being Father Christmas and would like another jumper just the same as the last one, so I have obliged, though I think with some improvements.

The jumper uses an old plain red school sweater as a basis for embellishment.

I started by drafting a Peter Pan style collar to fit the existing neckline of the sweatshirt, and cut the collar from bits of fleece from a white fleece blanket. I left the neck band in place when adding the collar on this sweater as on the 2020 iteration of this same idea I removed it first and it left the neckline a little too open. I attached the collar on the underside of the collar/edge of neckline join, and then added matching cuffs and a bottom hem with am overlap.

I added a ‘belt’ embellishment by adding two long strips of black heat transfer vinyl around the low waist, front and back, to make an encircling hoop all the way around the sweater. On top of that I added a buckle that I designed, cut on the Cricut plotter from heat transfer vinyl (download the .svg file for the buckle). Once the belt and buckle were in place I added a double line of stitches from the hem overlap up to the ‘belt’ and then from the top of the ‘belt’ to where it meets the neckline, as a little detail to hint at the overlap of the buttonhole band.

I sewed three large (5cm) buttons to finish the jumper, and added thin strips of fleece sewn into the buttonholes, over the actual securing thread of the buttons.

I thought the project was finished at that point, and indeed it was perfect for Christmas jumper day, but tomorrow is Christmas party day, and the Christmas jumper is getting another outing at school, but now Bean wants a bit more… he wants a beard and some white mittens.

So the white fleece blanket has been back out, and a beard and mittens have been hastily made.

Seven year old Father Christmas is now ready for whatever the next two weeks can throw at him, and he has Christmas Jumper Day sorted for another couple of years, hopefully.