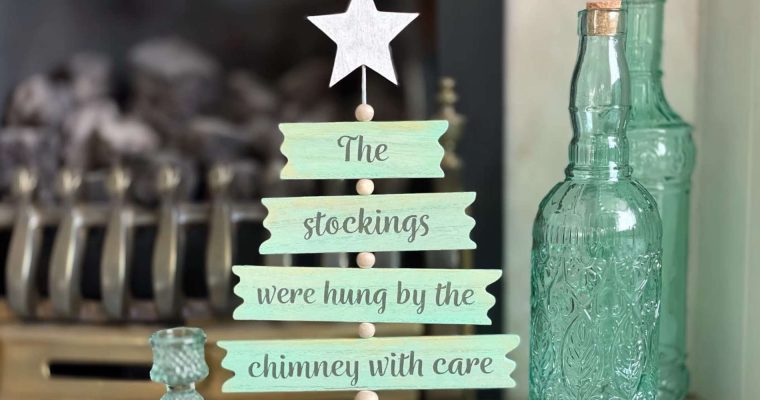 I picked up a very inexpensive crafting blank from Hobbycraft in late November. It isn’t something I would usually go for, and I had no plans for it, but I thought it would be something that I could experiment with painting.

I chose a pale green for the basis of the decoration, with a very pale brown/buff colour and white for the base and star. I wiped most of the green paint back off with a damp piece of kitchen towel to let the wood grain and natural colour shine through, and once the paint had dried to a slightly sticky stage I lightly rubbed some gold Micah powder around the edges of the tree and star.

The form of the tree seemed to suggest that it needed some text, but I was worried it was going to end up a bit ‘Live, Laugh, Love’ in sentiment, so spent a week or two (and much crowdsourcing of ideas) before I found something to both fit the four lines each wider than the last, and which I would enjoy.

The Stockings were hung by the chimney with care,
In the hopes that St. Nicholas soon would be there.

A Visit From St. Nicholas, by Clement Clarke Moore

I thought that the first line of this couplet worked on its own, and made sense to the object as it was going to live in front of the fireplace, where the family stockings hang.

I cut the wording from a piece of stencil vinyl on the Cricut, and attached the stencil strips to the tree once the base coat had dried.

To ensure clear text I first painted over the stencil in the same pale green as I had painted the tree, let that dry, and then painted the text in a mid grey. The initial base coat of paint on the stencil helps to stop any paint from seeping under the edges of the stencil.

The tree now sits in the fireplace, in front of our stockings, in the hopes that St Nicholas will soon be here.