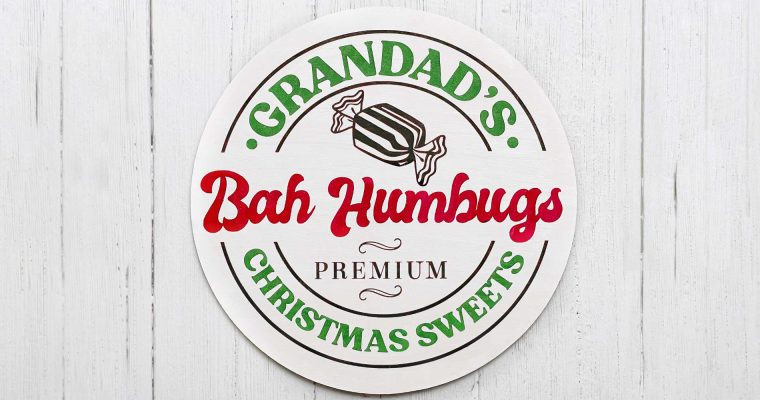 This year I made a promise with my Ma: we would not buy each other Christmas presents. One of the kindest things we could do for each other was to release each of us from the obligation to spend money on each other when so many people are finding the cost of living so difficult to cope with. Buying gifts for the children in the family, we agreed on, because nobody was ever going to convince her otherwise.

And I kept this promise, though at the same time I wanted Ma & Pa to have something to open on Christmas morning, and I decided that I would make something for each of them. Something that I had most of the materials for and so would cost less than £5 to complete both, as I already had acrylic paints and priming clear lacquer spray on hand.

I found some large log slices at a craft shop for £3 each, and decided to get one of those and a round wooden disc. My initial idea had been to make a round sign for the kitchen for my Ma, where she reigns supreme in making Christmassy treats, and one for Pa from the log slice, saying something like ‘Grandad’s Christmas Tree Farm’, or similar, as he is the one who valiantly goes to get the (plastic) Christmas tree (from the cupboard) each year, and never passes up the opportunity to make a bit of a fuss of the job!

The plan changed along the way as I eventually settled on a Candy Cane design for Ma’s, as she buys Bean an array of brightly coloured candy canes each year, and as Mr Codd pointed out, if I was going to make hers sweet themed, surely grandad, the world’s biggest consumer of mint humbugs, has to have a sign that reflected this.

They both opened their gifts the day after visiting us earlier in December, at my request, so that they could hang them up over Christmas should they wish.

And though some may argue technicalities as to whether I stuck to the basis of our agreement that we would not buy each other gifts this year, I can with 100% hand on heart say that at least I did not do what she did, and turn up with two purchased gifts each for my husband and I.