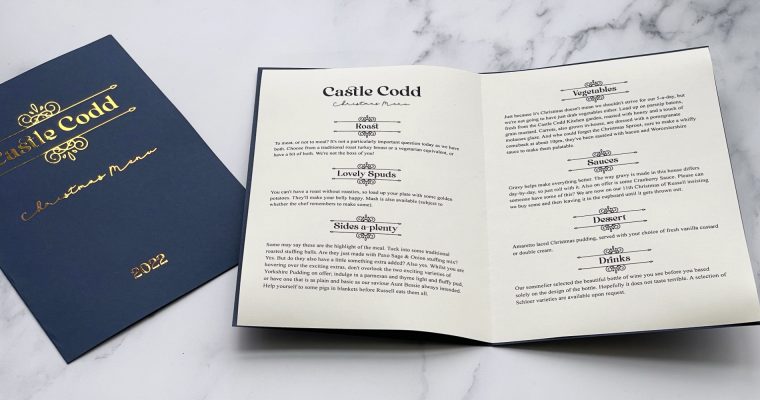 For the past few weeks I have been putting a lot of touches towards making a Christmas experience that I wanted to make extra special. We arranged to host guests for the first time since the pandemic hit, and in a way the extra effort was to make up for the past three years. As the economy is a mess I have been hand making as much as I have been able.

One little extra touch I wanted to make was little dinner menus for the Christmas meal. It was just a silly little project, but it amused me, and helped me make something fun of the planning.

Today I had a text message to say that my in-laws, who were due to arrive tomorrow morning have Covid, and therefore many of the plans and preparations I have made will no longer stand as they were (I had made personalised stockings for them, among other things), and really the menus are now a bit out of date, as I will cook a vegetarian meal just for my little family (I bought turkey only as we had company), and we won’t drink the alcohol either, but I think I’ll still put these on the table, as they make me smile.

I made this in Affinity Designer 2, a new (to me) program that I am learning to replace Illustrator. I had planned to use toner reactive foiling for the lettering on the cover, but I just could not get it to stick to the toner on any type of paper I used. I tried it on one of the homework sheets sent home from school and it bonded instantly, so I think it is the cheap 3rd party toner in my laser jet. Instead, I ended up cutting the cover design from foil heat transfer vinyl and using a heat press at 150°c for 15 seconds and letting it cool before removing the cover sheet. It wasn’t quite what I was after but worked in a pinch.