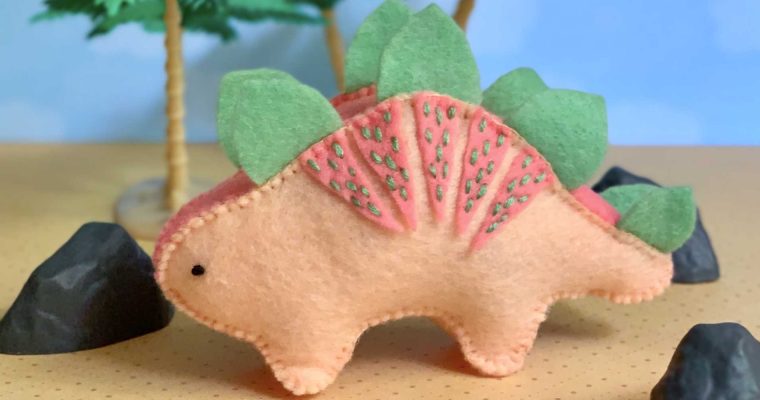 The first half of July has been full of new things I have put my hands to making. It has taken so long, but I have finally found something of ‘me’ in this experience. After sewing for simple necessity, I’ve been enjoying both hand and machine sewing things less necessary and more for the pure joy of it.

I started to feel a bit more capable as I finished of the little felt Dinosaur kit that had arrived as a cover gift from Mollie Makes magazine. He was the least practical of projects (the best kind) and I think he’ll be joining my Christmas tree decorations this year. He was very easily hand stitched with very simplistic little decorative touches, and only took an hour to complete. It was just the little stepping stone self care project that I needed.

Next, I found a small piece of gingham fabric, just big enough to squeeze a manatee out of. She was an extremely simple piece of sewing, with a couple of safety eyes and some nostrils painted on with acrylics, for personality. I love manatees. They are my absolute, number one, favourite animals ever. manatees are my kind of personality: slow, and happy, and thoughtful. The pattern for this little friend is from DIY Fluffies and is an extremely simple make. She can be made from woven fabric and sewn very, very quickly.

Beautifully times for around our anniversary, Russell finished the tapestry cushion kit that I put together for him back in Christmas of 2017. It took a good two and a half years to finish, though he worked on it quite sporadically. I remember as he was stitching it that I thought it would be the most ridiculously huge cushion ever to be made. I imagined this big cumbersome thing that we threw onto the floor because it had no rightful place on the furniture, but it turned out only to be an average sized cushion, smaller than those that we have on the sofa. Partly this is the transformation of the flat, laid-out piece of needlework into this full and bouncy 3D object, but it is also partly the cotton canvas and yarn shrinking the second it hit the water. It turned out perfectly cushion-sized in the end.

The work is 100% Russell’s. The illustration that I had the canvas printed from was by Hello Hinny, with a few minor tweaks to eye shape (to make them more stitch-able) and to extend the background out to a square. I made a lapped zip back from some heavy cotton drill I bought at Ikea last year (waiting for this very job) and took the opportunity to re-back the handspun crocheted rainbow cushion with the same fabric and matching zip. I need to make a new pad for that one as it has definitely lost a bit of loft over time, mostly because it is my little boy’s favourite cushion and so suffers all of the abuses that an imaginative 4 year old might throw at it as he jumps upon it at great heights.

Finally, a bat. My next door neighbour is just finishing her time at primary school, at the same time my little boy is about to begin his, and I wanted to make a little gift to mark the change for her. I always used to pick up the (now discontinued) £2 polar fleece blankets in various colours any time I went to Ikea, as they were great for making soft toys from. I chose a bat simply as I only had bits of grey and purple fleece left, and the colours seemed to work. Since making the first one I have whipped up a second as my Ma requested one for herself. Features have been appliquéd on and I have given them little beady safety eyes purely because I have a box of them at my disposal and they look rather comical. The pattern for this one is a free one from Choly Knight (who has an absolutely incredible range of free toy patterns available).

So, that’s thats a few little projects completed to brighten up the home or other people’s days. I know that one little bat has found its way into prime cuddling position as it has been taken to bed as a cuddle pal over the last few days. I hope it shan’t be too long before I am able to give the there bat to my ma, as needing to stay at home rumbles on.

I hope that you are well, staying safe, and have a little bit of brightness in your home today.