More than a decade ago I learned to draw in Photoshop. I’ve used Photoshop for the creation of illustrations and graphics far more than I have used it for photo editing. It was all I had access to at the time, and so that was what I used. It wasn’t really the right tool for the job, and so when I finally gained access to an (old) version of Illustrator a number of years ago I thought I would attempt to learn that. Nope. For two programmes from the same suite of products, the way they implement the pen tool so differently just threw me each time I tried to learn. I could not do it. The fact that I haven’t owned a mouse or any input other than a trackpad for well over a decade probably did not help, but, whatever the actual reason, I hated Illustrator almost as much as it hated me.

After a few very poorly days had me stuck in bed for a time this month I decided I was going to have another crack at it, but this time, I was going to skip the pen tool (for the time being, anyway).

So I took a few quick tutorials on Tutsplus with the genius intention of skipping over the pen tool entirely, for now at least. It’s actually pretty impressive the amount you can achieve with a few basic geometric shapes and the ability to warp and distort them in a number of ways.

After a couple of tutorials I decide I was going to draw a bird, and I was going to compose it of simple shapes chopped, merged and fitted together. With this in mind I started with a very simple canvas to build the bird upon: a perfect circle. 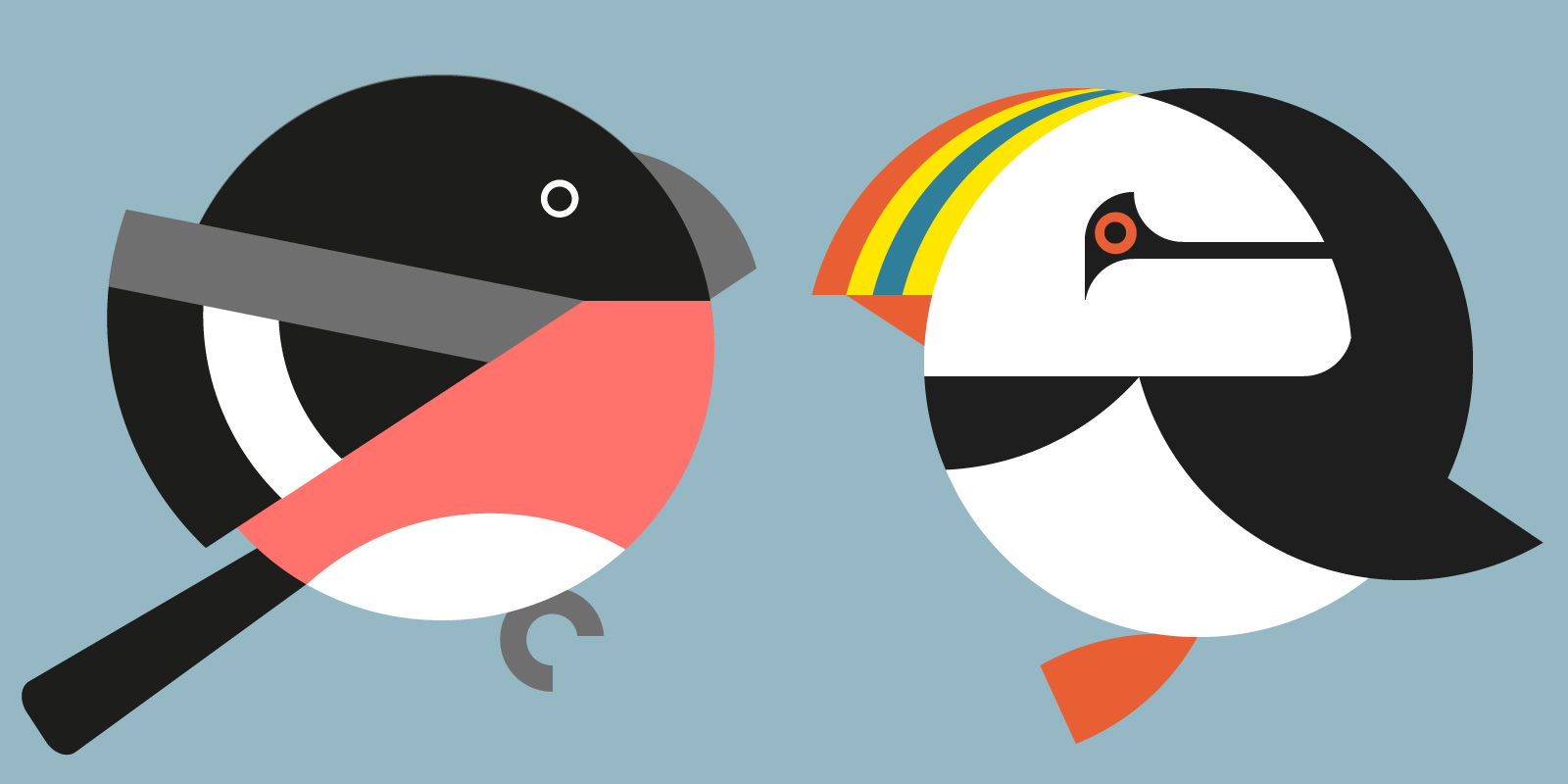 I sketched my first bird out in pencil, trying to break it’s constituent parts and markings down to simple geometric shapes that would sit mostly within a circle, but with certain defining characteristics (usually beak, tail and feet, and sometimes wings) extending beyond. Once I had my design I tried to replicate it in Adobe Illustrator, and the first Roundybirb was born. Why ‘birb’? Because of the internet.

In a recent post I gave details of the process of sketching and then creating one of the birds in Illustrator in a 60 second video, which also went onto show the next part of the process: cutting the birds from paper. This added the greatest complexity into making the birds as each of the layers have to fit and line up exactly, and windows have to be formed for one colour to make way for a colour further down, which then may need another portion removed to make way for another colour a further two, three, four or more colour layers down. 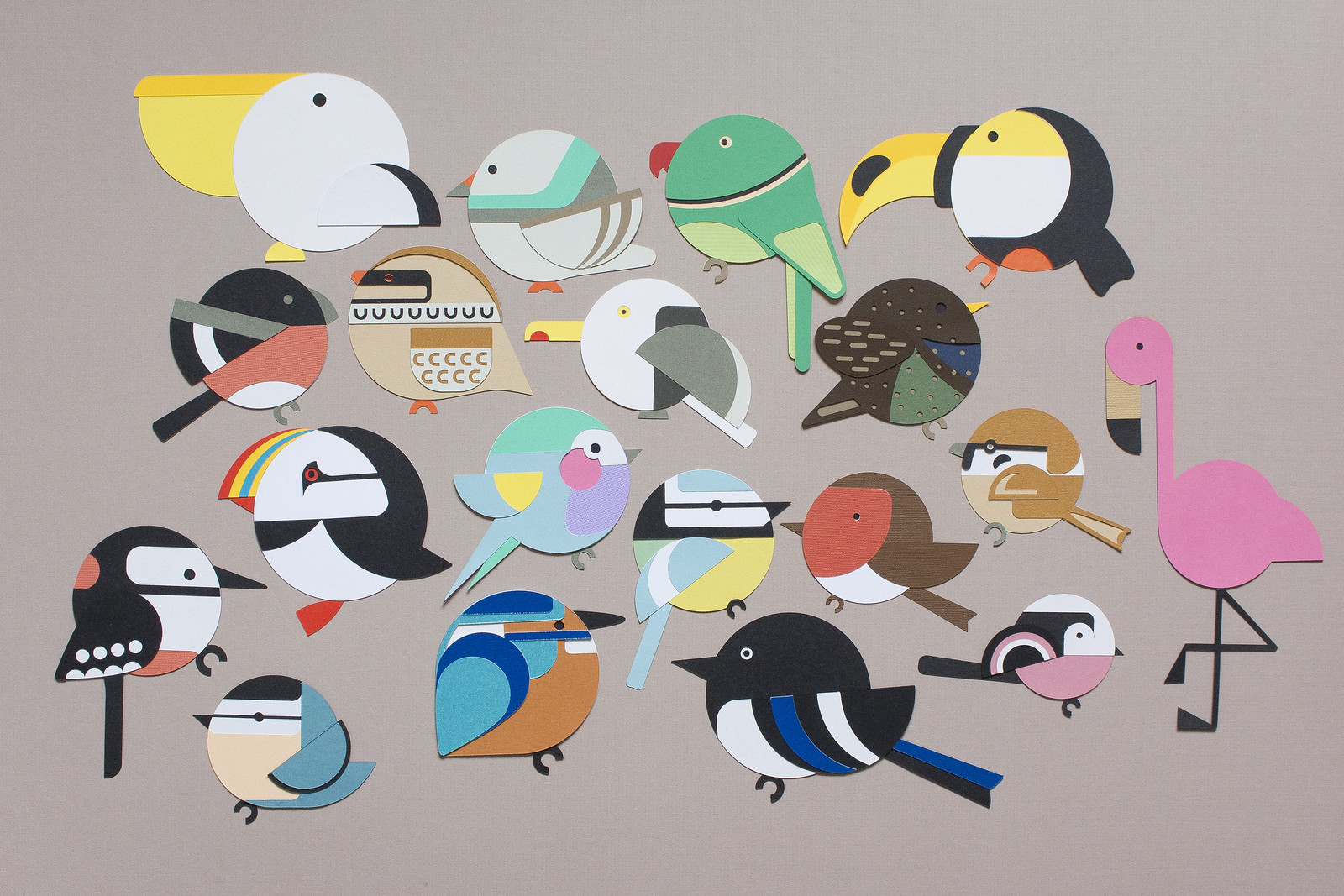 Every time I think I have just about got a handle on the layering issue, I get completely stumped at how to arrange and cut the layers for a bird that at first seemed simple. Each bird is different. With different shapes, different markings and a different way in which the shapes and colours lay alongside each other. I did think I might find a process to making them that worked for each bird, and though there are a few replicable steps, each one is essentially a process of learning the whole thing from scratch once again, and I have had to perform a good old ‘start over’ a number of times. It’s all good as an opportunity to learn.

So, this is my current ‘big’ project. I embark on one in some form or another each year, often based around birds. In December of last year I slowly painted bird watercolour miniatures, that I eventually gave to my mother for her birthday (she has a bird phobia, but she promised me that these did not count). 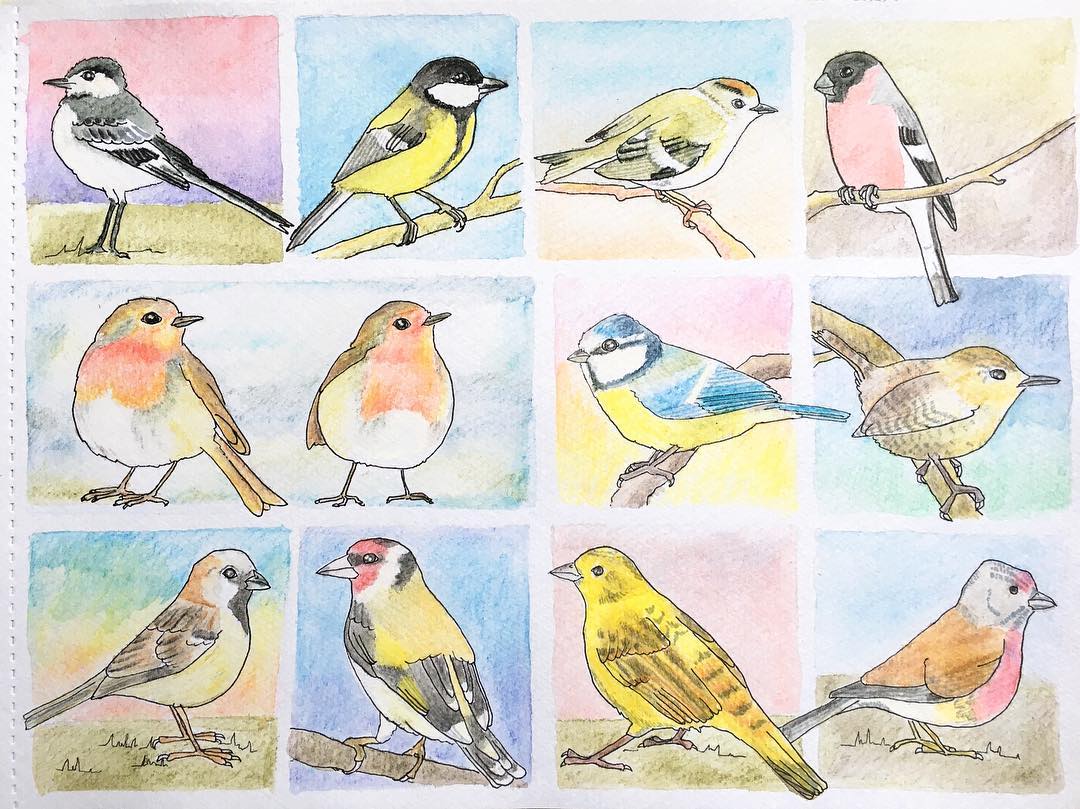 The year previous to that I drew a different bird on my living room window with a chalk pen every day through December. I don’t have any good pictures of the completed double window as it turns out windows are a particularly difficult surface to photograph with an older smartphone camera, but here are a couple of my favourite photos from that month.

All of my bird projects are dedicated, in at least some way, to my grandad. He adored birds. Not to go out and track down and follow rare birds, just the simple joy of watching them in the garden or the park. I tend to start a new bird project in December, when I miss him most. This year, I found that a difficult time hit me in July, so my birds have come to visit earlier in the year, and for now, they are still arriving.

So, that’s how I’m working through some tough times now, supported by a lot of help from others, in many forms. Every message that has reminded me that I am worthy has helped. Every note to tell me that I can get through things has been just a little cushion. And practical help, too. I’ve had help from someone who has sent me cardstock from their stash (brown cardstock, folks… it’s a rare and precious commodity) so that I can cut more birds. A friend fixed my site after I broke it (and it partly broke itself) and I have the most amazing biscuits for when I just need a biscuit and tea, and stickers for my little boy because this affects more than just me, and an emergency craft stash for when I need to make something without being too creative myself.

As silly as it may sound, these birds are helping. Though I need to be in a relatively calm and together place when I think the layering through, especially, just having created something big seems to have helped. I don’t know what I shall do with them all yet, if indeed I can do anything with them. In fact, when writing this post, I was trying to remember the name of a little, very round bird in nature that someone alerted me to a few days ago (a Bearded Reedling, fact fans) when I found Round Birds, and it’s kind of knocked  a few of my ideas backwards. Maybe there really is nothing new under the sun. Obviously they’re not quite the same as my roundybirbs, and I think the markings of the round birds are composed entirely of circles and arcs, quite an achievement, but I think they are likely cousins. I’m trying not to let it take the wind out of my sails.

For now, I hope I can find the motivation to keep making all of the roundybirbs on my list, and keep learning more of Illustrator each time a problem needs solving. One day, I may even draw a square.

2 thoughts on “The Roundybirb Project”