Yesterday was Darwin’s last day of nursery for this year, as he has now broken up for the summer holiday. Though he will be back again next year (he actually has another two whole years of nursery ahead of him!), I thought it was important to thank those who have cared and nurtured him for his first year of learning. 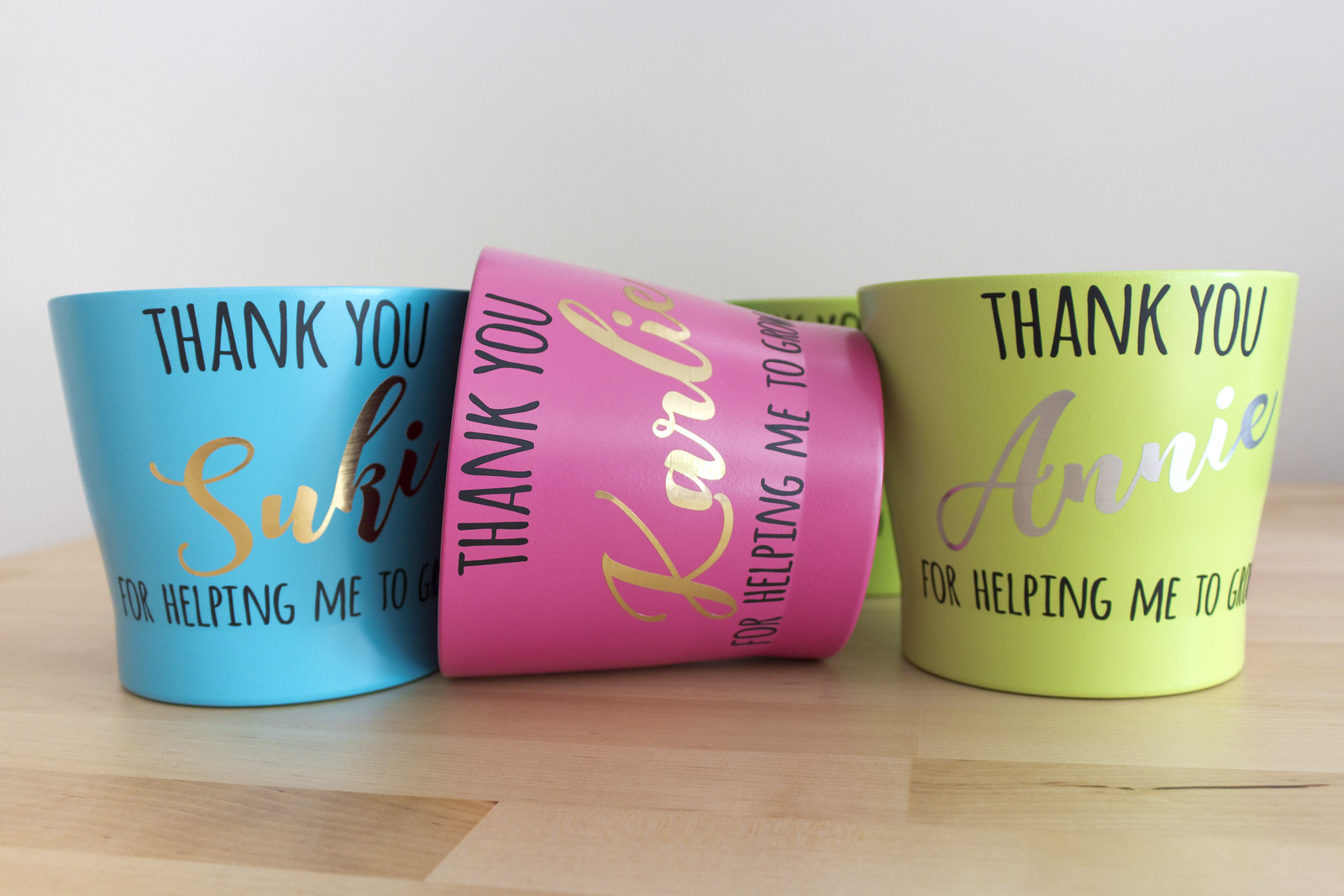 I decided a sentiment that reflected this would be important to include in some manner, and decided that it fit very well with one of the topics that Darwin has most enjoyed at nursery this year: gardening, and care of flowers and plants. So, I decided to decorate a few plant pots and give one to each of the six nursery teachers along with a plant. I wanted to keep costs down due to the number of staff at the nursery I was making for, so off I went to Ikea, which is one of my favourite places for crafting materials and craft blanks. 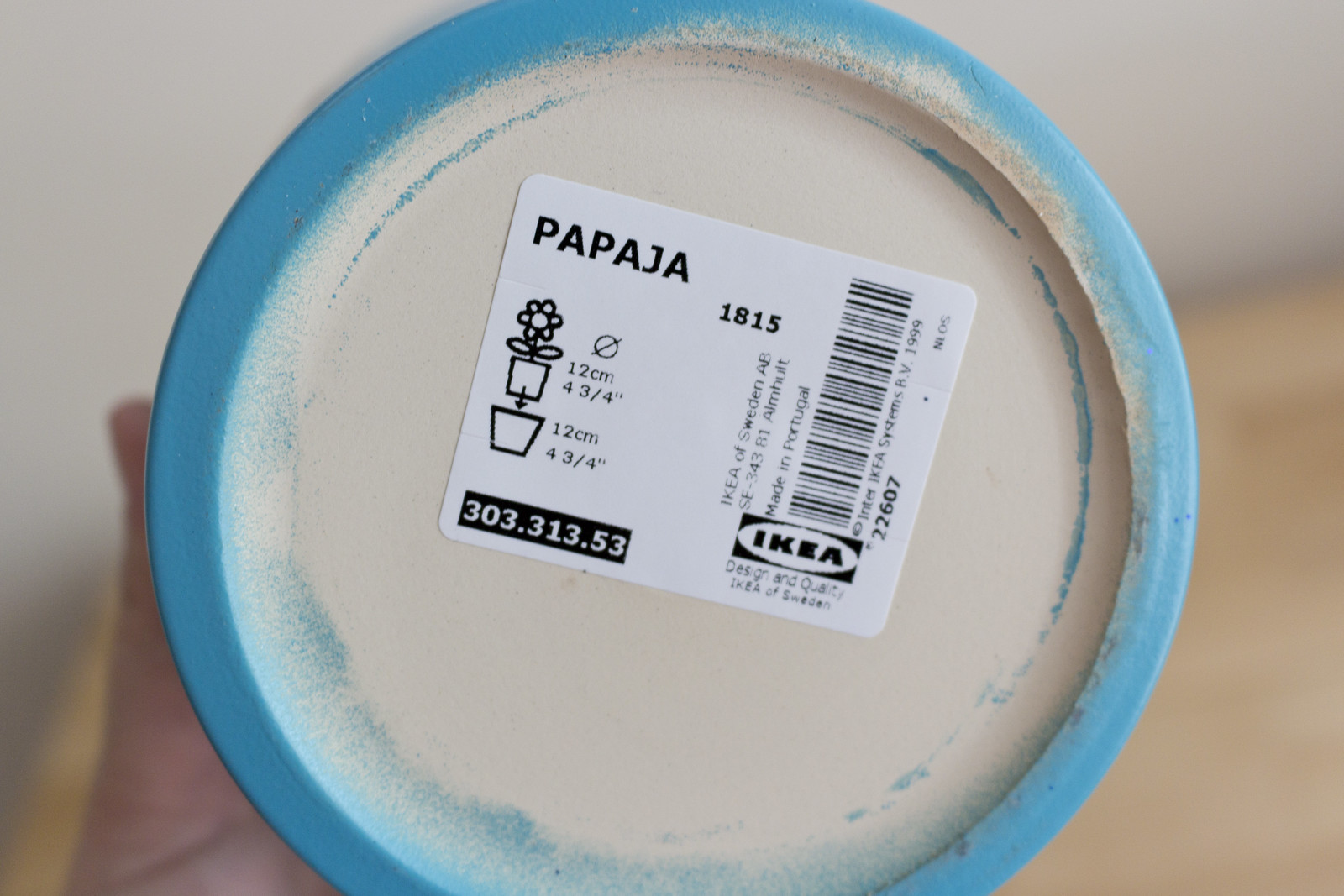 Bingo. These Papaja Plant Pots are a nice medium weight ceramic pot and came in three bright and vibrant colours, for just £1.50 a piece. These are the 12cm circumference pots. There is an identical but smaller 9cm pot in the range for just £1, but the extra 50p buys a lot more pot, and makes the application of lettering a lot less fiddly. Armed with my bag of pots, I set off home with lots of ideas but no actual clue as to how to achieve what I wanted.

I wanted to use permanent vinyl to attach to the pots. Similar to the contact paper people line drawers with, adhesive vinyl arrives in sheets or rolls with a sticky-backed vinyl sheet, placed on a peel-off backing sheet. There are many makes and brands available, but I used Arteza Self-Adhesive Vinyl in a variety pack of colours and finishes.

I decided on a sentiment ‘Thank you for helping me to grow’, and that I wished to include each of the staff members’ names. The pots were all bright colours, so I decided to keep the majority of the text in a matt black, skinny font, but to highlight the teachers’ names in a foiled modern calligraphy font.

I browsed the internet for tips on applying vinyl to curved surfaces, specifically plant pots, and noticed something immediately; the text was smiling. A lot of the tutorials on the internet seem to not take into account the flare of the pot towards the upper edge when setting out text. So, armed with a piece of paper and some maths, I made a template. You can download the template to allow for the placement of your own text – just follow the curves by applying an arc transformation to your lettering in your graphics program.

The template will only work on this specific size and shape of pot as other pots will have a different ratio of upper to lower edge circumference, as well as a different height and size. Once text takes on this slight curve, it allows it to remain an equal distance from the top of the pot, rather than dipping in the middle of the line. 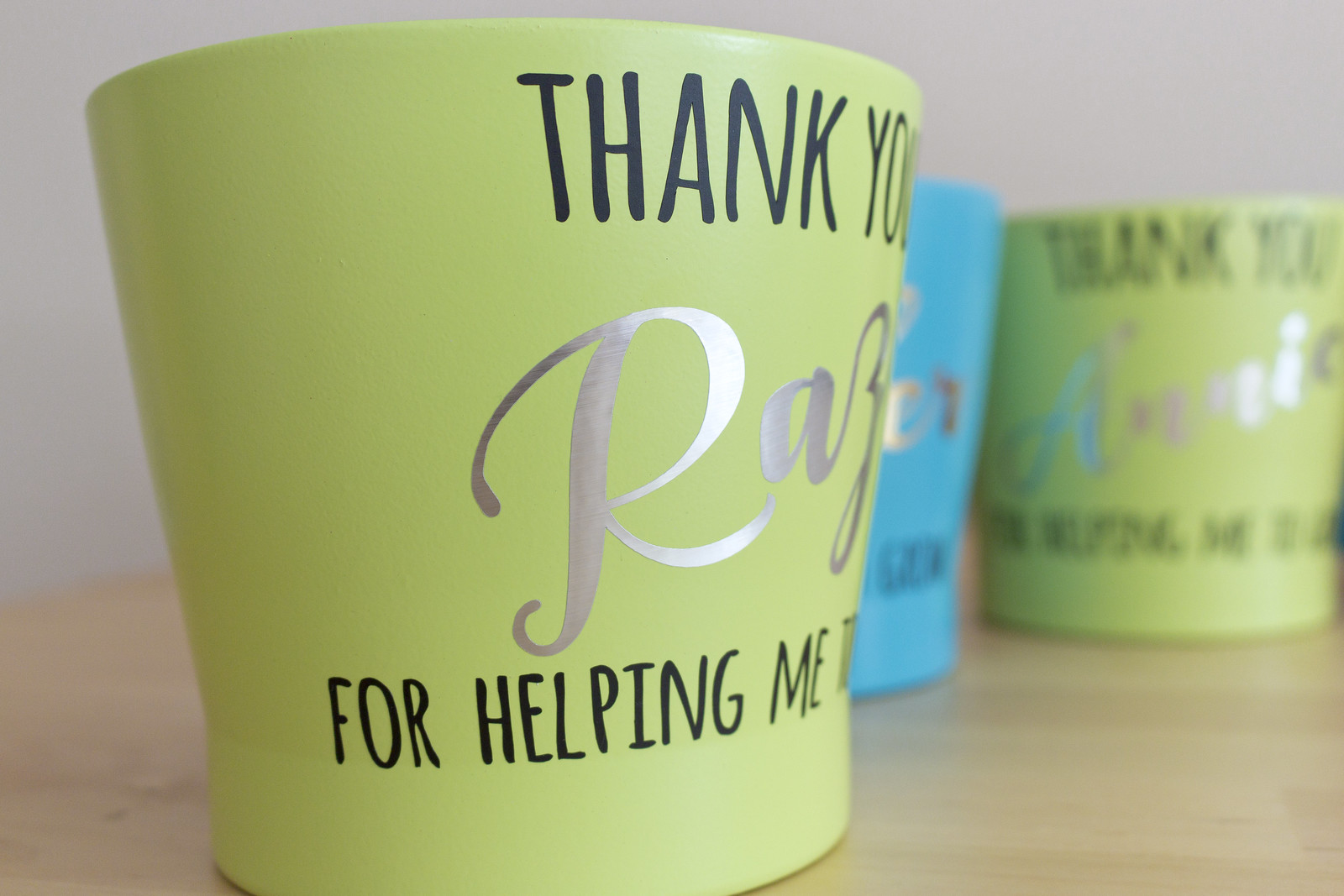 Applying the vinyl was relatively straightforward, but included an extra step in comparison to the heat transfer vinyl that I used last week. Unlike heat transfer vinyl, the Arteza self-adhesive vinyl is cut with the colourful side up, and isn’t mirrored as when using the Arteza heat transfer (check your own brand, though, as I believe that application details can differ). Firstly, excess vinyl is removed from around the lettering and all the little bits within letters (the circles within Os, and little pieces from within the Ps, etc. Once you are left with only your lettering a wide piece of ‘vinyl transfer tape’ is applied, sticky side down, straight onto the lettering, and rubbed all over with a scraping tool, fingernail or credit card to get the letters to stick to it. Some transfer tape looks like book covering film, which some users say can be used as a replacement, but the brand I used was more reminiscent of painter’s masking tape, but 30cm wide.

Getting all of the letters to stick to the tape was not easy. The UK was experiencing a long and drawn out heatwave, and it was extremely hot and humid. I couple of times I lost a letter or two and had to apply them by hand, but for the most part, it worked as intended. The transfer tape is placed down on the post and then rubbed all over again with the scraper or credit card, pressing firmly. The transfer tape is removed, et voila, you have transferred your lettering. 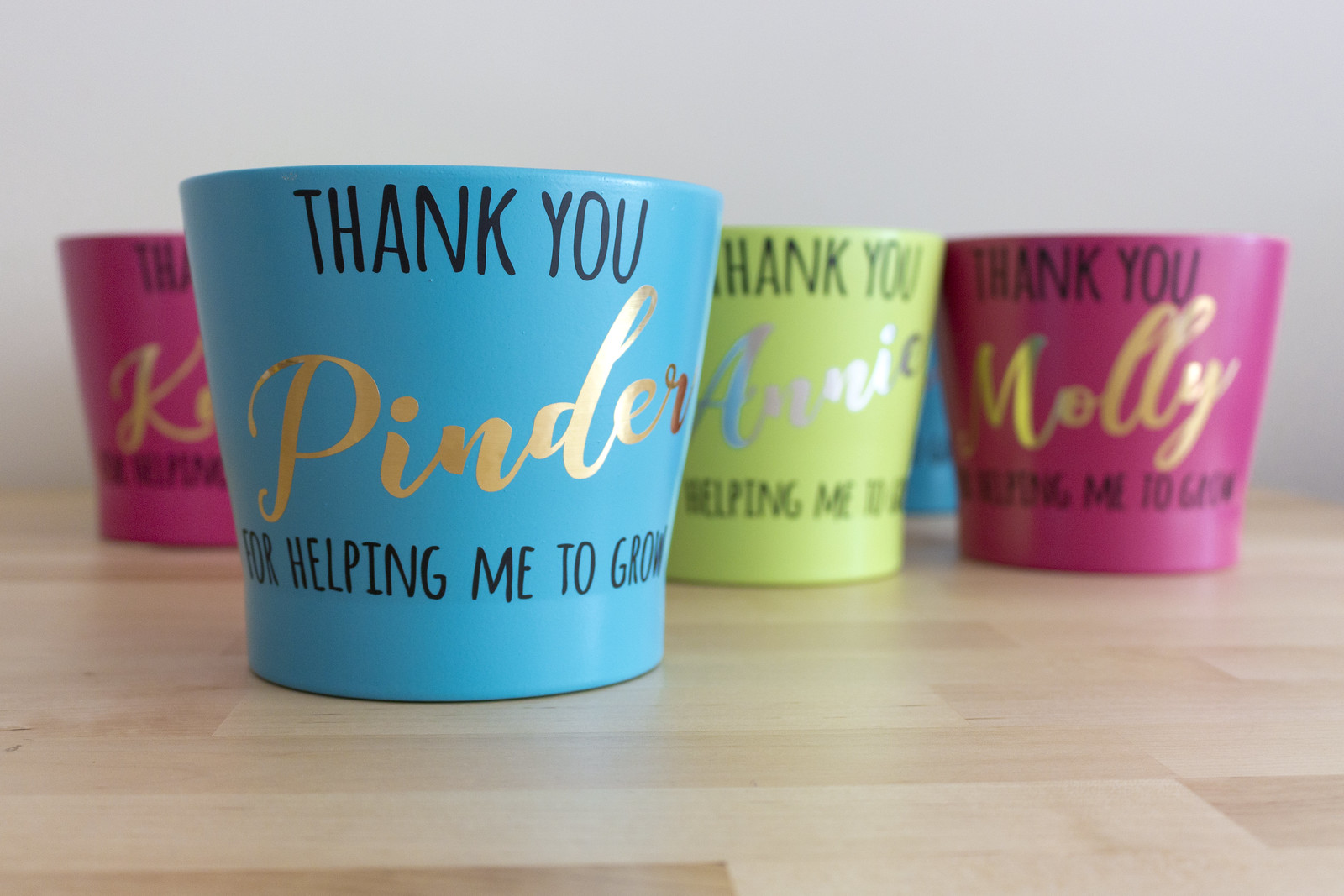 By all means you can load up the transfer tape with all your lettering at once before making the transfer, but I found it far easier to apply line by line: top, bottom, and then name in the middle, to give best fit. If transferring the whole design at once you’d want to copy the image of the curvature template onto your transfer tape to ensure the curvature was kept aligned.

Once I got the first pot finished, the rest were a breeze. I found that putting the transfer tape on, burnishing really hard with the scraper and then lifting the tape off carefully but quickly meant that no letters were left behind. On a less humid day and with less spindly lettering, this would likely not have been a problem, but the process sped up quickly once I had the first pot complete, and the rest I finished in a production line manner. 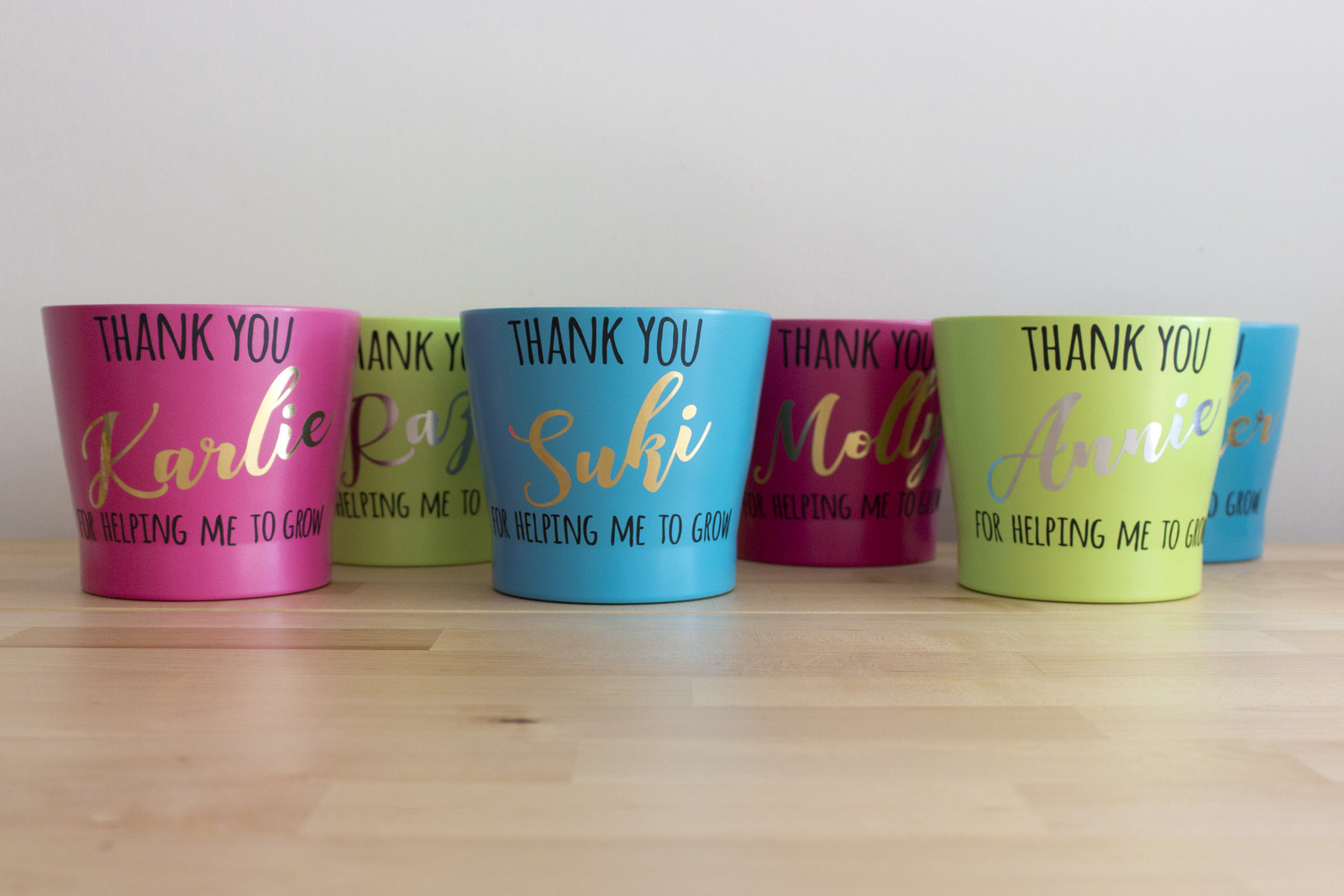 All that remained was to pop back to Ikea to pick up six appropriately sized plants, which came in at £2.50 each. I labelled the cellophane wrapper of each plant with a greeting from Darwin before giving them to the teacher. I had considered putting ‘love from Darwin’ in very small letting on the bottom edge  of each pot, at the back, but thought even inconspicuously, that I would rather the sentiment be entirely for the carer. They are the carers of many children, and hopefully it will be a reminder of the gratefulness of their care for all our little ones and that their job is recognised as important. 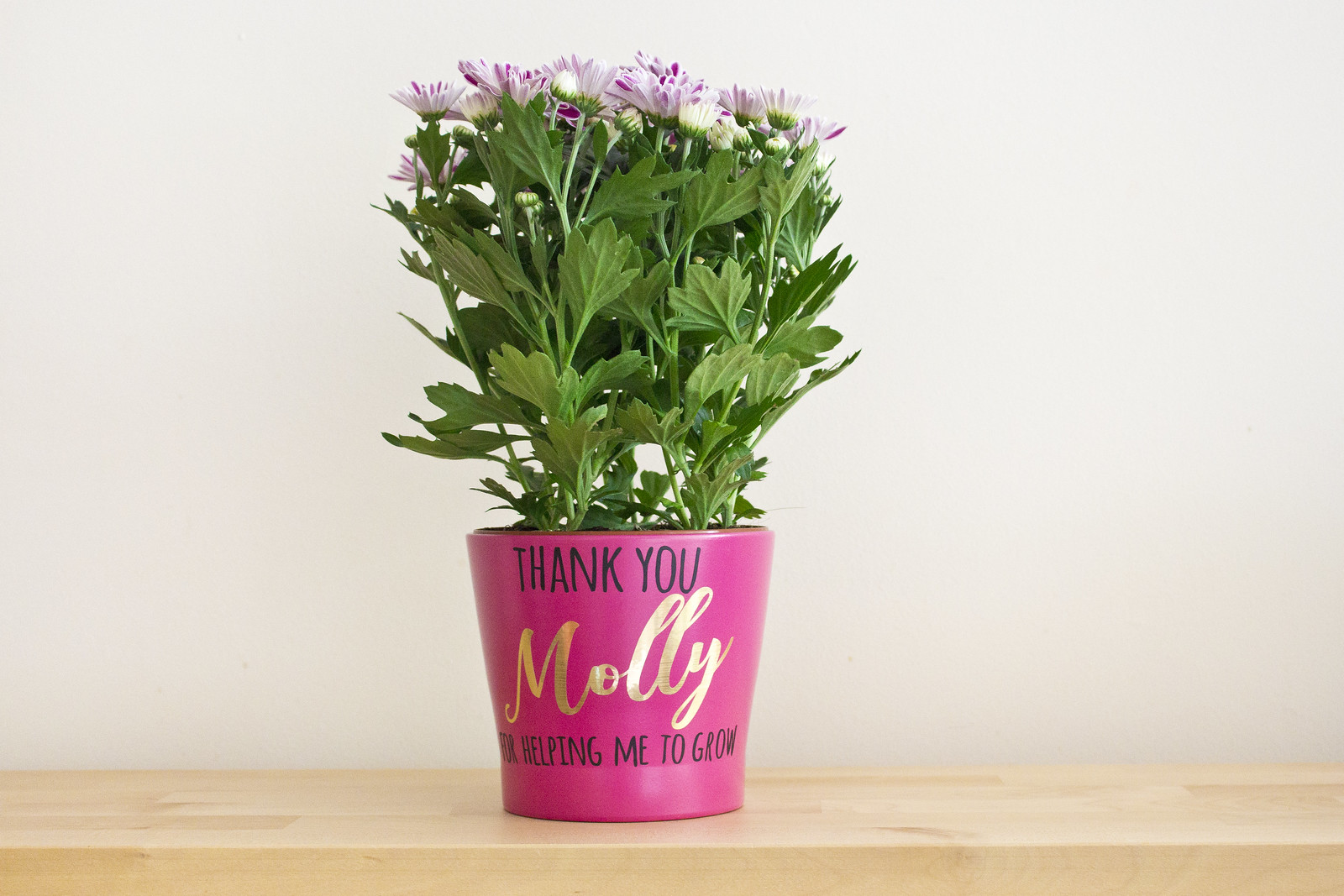 Thank you to all teachers and staff of schools, nurseries and other childcare groups for your work this year.

As I wanted to keep costs down, here is the final cost total: