If you are a creator, a maker, artist, crafter or dabbler then you may well agree with me that few things feel more exciting than new supplies. So, as I needed a bit a creative boost I decided to treat myself to a crafting medium that I had never tried before, and I bought some vinyl, as I have owned a cutting machine for a number of years but only used it for paper and card projects. 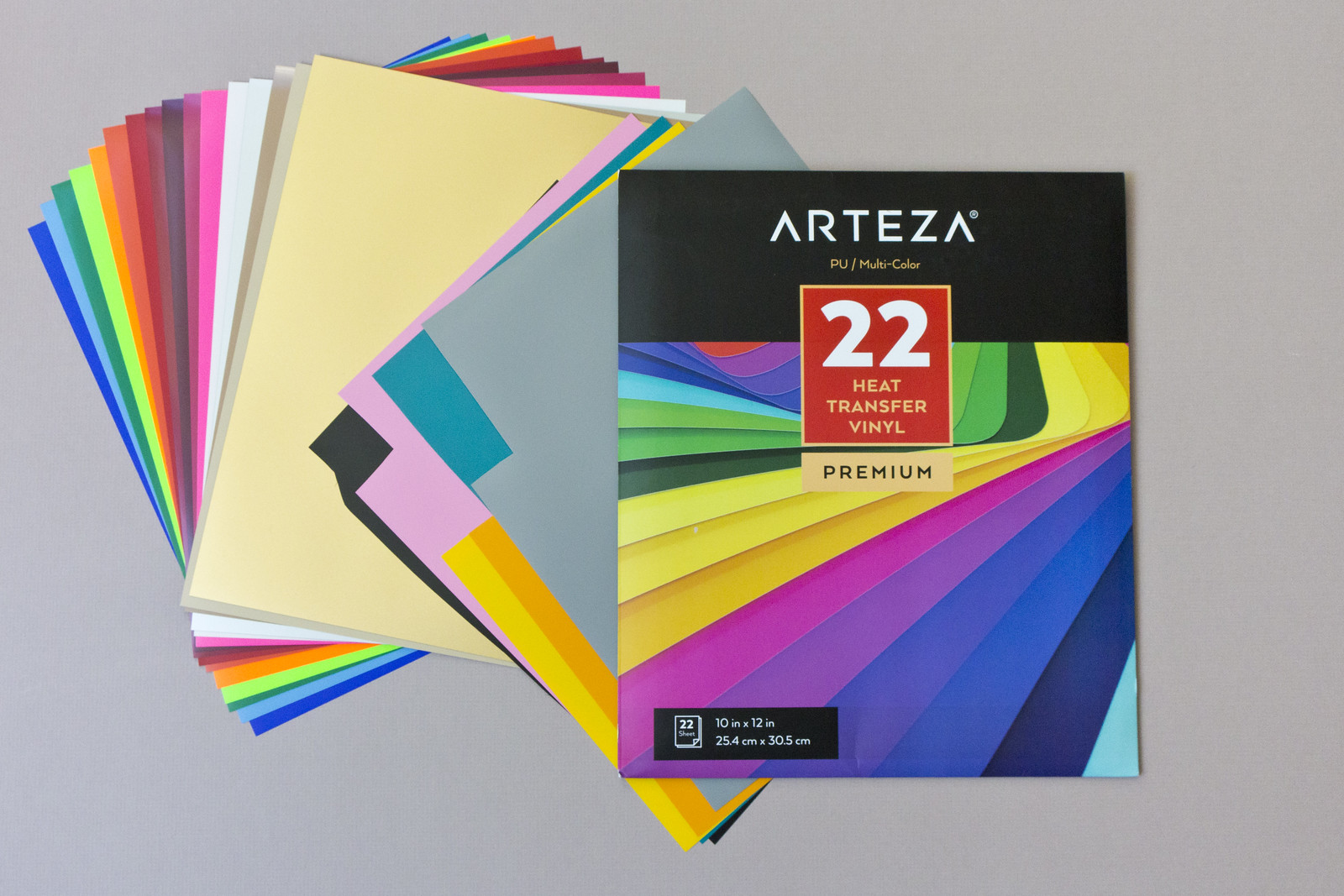 I had never actually handled any craft vinyl before it arrived, so I wasn’t entirely sure what to expect. I ordered a pack of assorted colours as I didn’t have a specific project in mind at the time of buying. My first task when it arrived was to take stock of the colours I had and to arrange it into colour order. What kind of monster would ship a selection of colours without arranging them in colour spectrum order?

I didn’t really know what to make with it, so with no project in mind I raided my toddler’s clothing drawers and rummaged until I found three plain and unremarkable polo shirts which I’d bought extremely cheaply from George at Asda’s school uniform selection, and decided to customise them as an experiment. 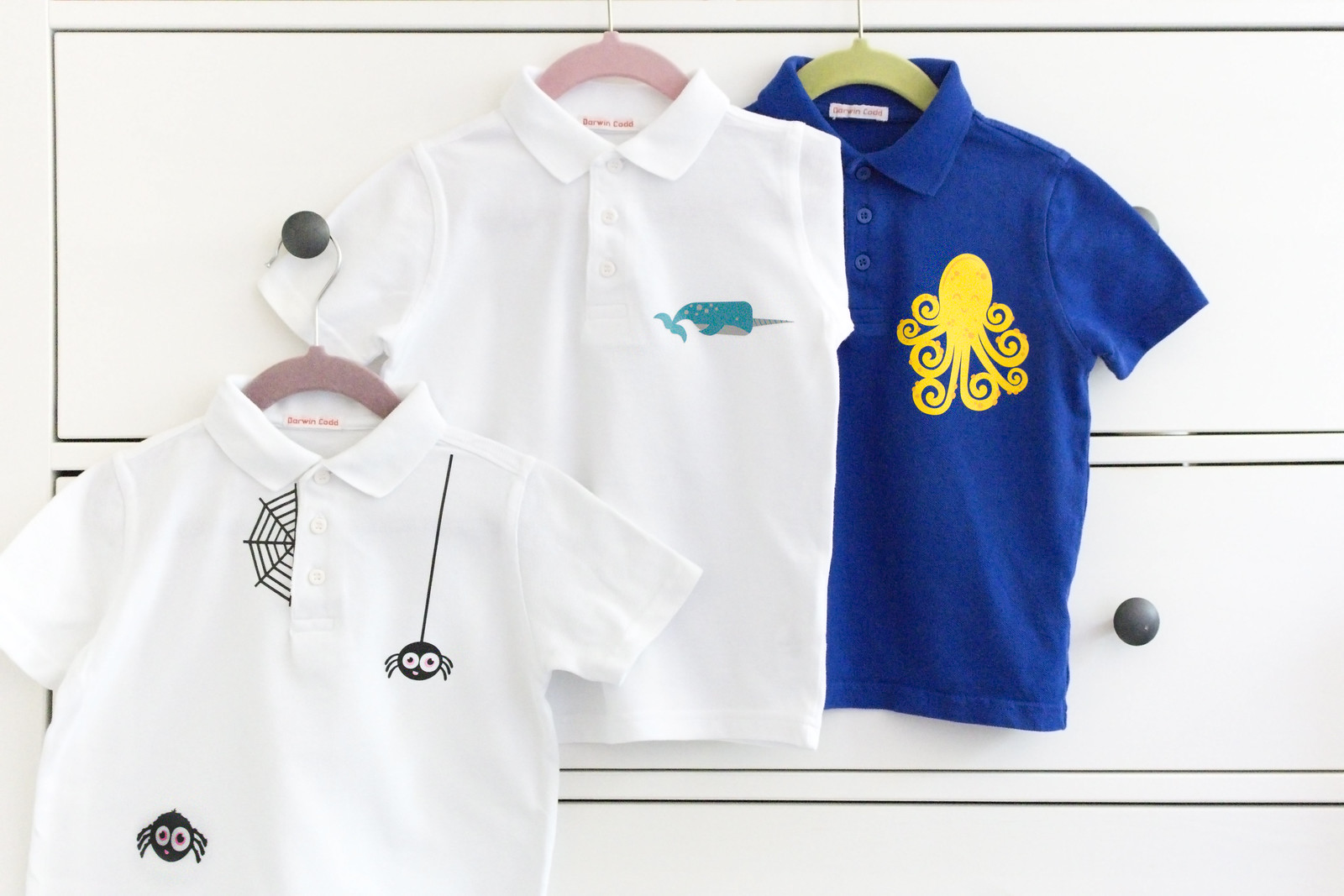 Though there seem to be a few different formats when buying heat transfer vinyl (HTV), the Arteza brand that I purchased works as a very thin film of coloured, flexible vinyl, mounted on a thicker, transparent and less flexible, carrier sheet.

A design is cut in mirror image into the reverse of the coloured vinyl sheet, but not deeply enough to cut through the carrier sheet. Excess pieces of vinyl not intended for the final design are then picked (or ‘weeded’) off of the carrier sheet.

The finished piece of cut vinyl is then laid on the garment (or other medium, such as wood) coloured side up, and with the clear carrier sheet topmost. A dry pressing cloth such as a handkerchief or thin tea towel is then placed atop the vinyl, and the image heat pressed (either with a dedicated heat press or domestic iron). The settings for the iron were a bit trial and error to work out, especially on the textured knit surface of the polo shirt, but I eventually found that a pressing temperature half way between medium and high on my iron worked very well.

The first polo top I customised was the narwhal design at the top of the post. The entire design is only a single layer thick, with each of the ‘spots’ lined up to sit within corresponding holes of the other colour. the only part of the design where this differs is on the corkscrew lines of the narwhal’s horn, where the (very fiddly) lines sit upon a solid shape for the horn.

The second polo top that I customised (the octopus) I tried slightly differently. With this shirt, almost the entire image is two layers of vinyl thick. 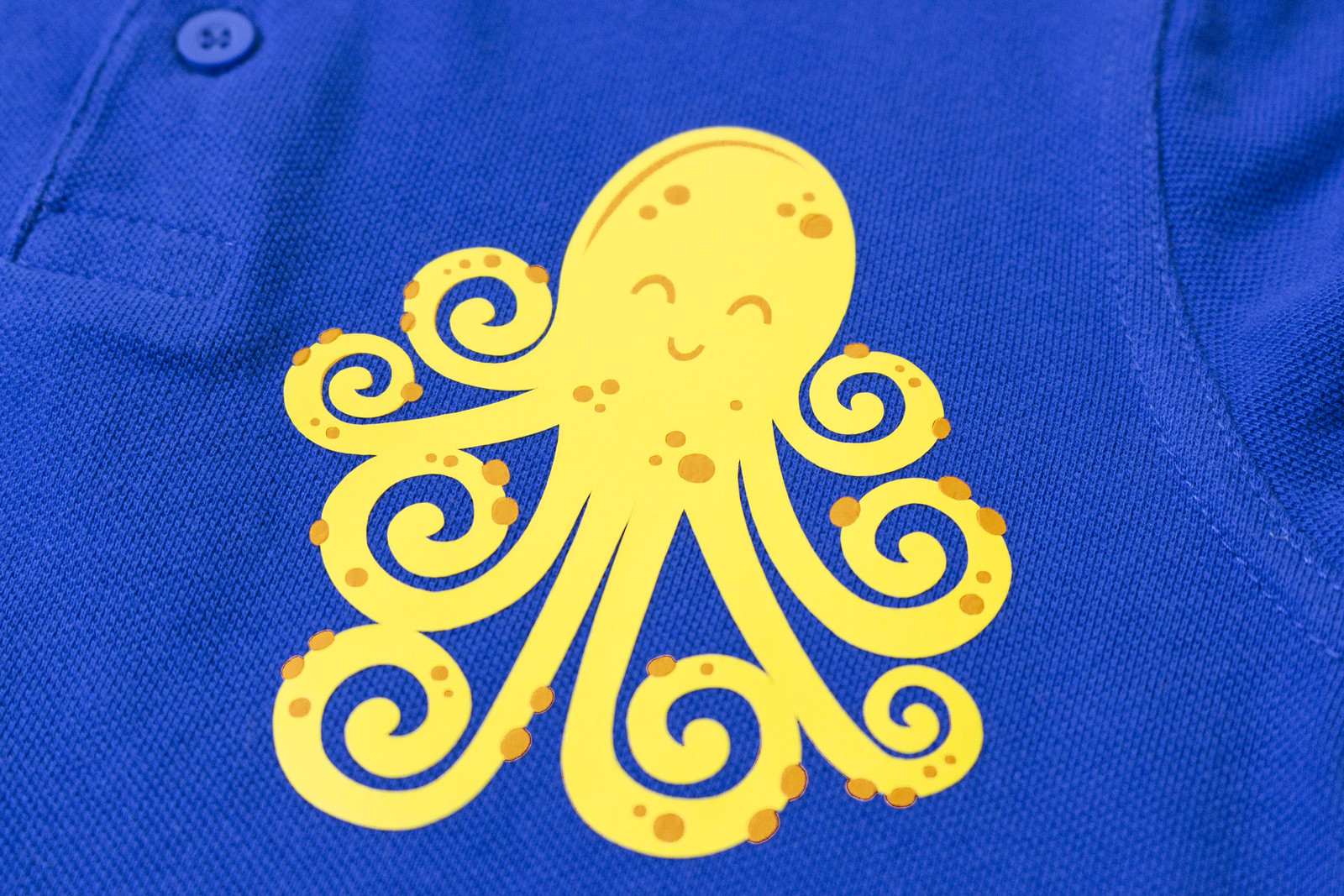 The first (darker yellow/orange) sheet was cut, and then an identical second shape was cut, with additional ares cut for the features of the octopus, and the spots and tentacle suckers. The resulting image is, of course, thicker. It’s still flexible, but you can feel more resistance to when moving the fabric in this area. 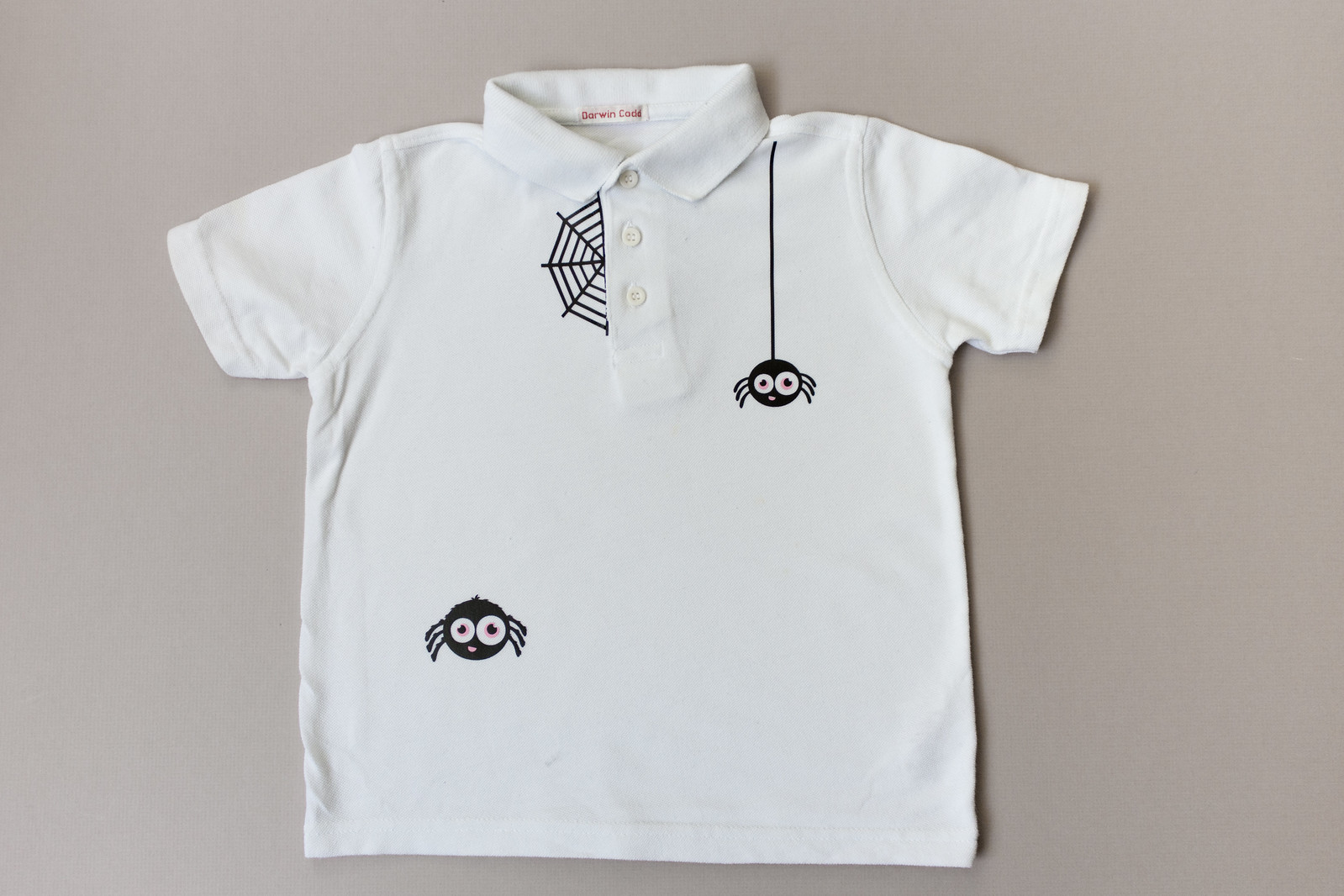 For the third polo shirt I just thought I’d have a bit of a fun with placement. The web at the button placket edge was difficult to apply do to not being able to so easily apply pressure to an area of fabric that was not completely flat, but after a few attempts and simply manoeuvring the iron into various positions, I finally got it to hold. Only after finishing this shirt did I spot the slight mark towards the hem that has been picked up at nursery, but if these polo shirts hold up in the wash at all then I also have a fabulous method to disguise the future stains and wear that a mucky little human inflicts upon clothes.

The instructions for the vinyl advise to wait at least 24 hours before washing garments that have been transferred onto, but I’ll be back with an update once these shirts have been worn and put through the wash. 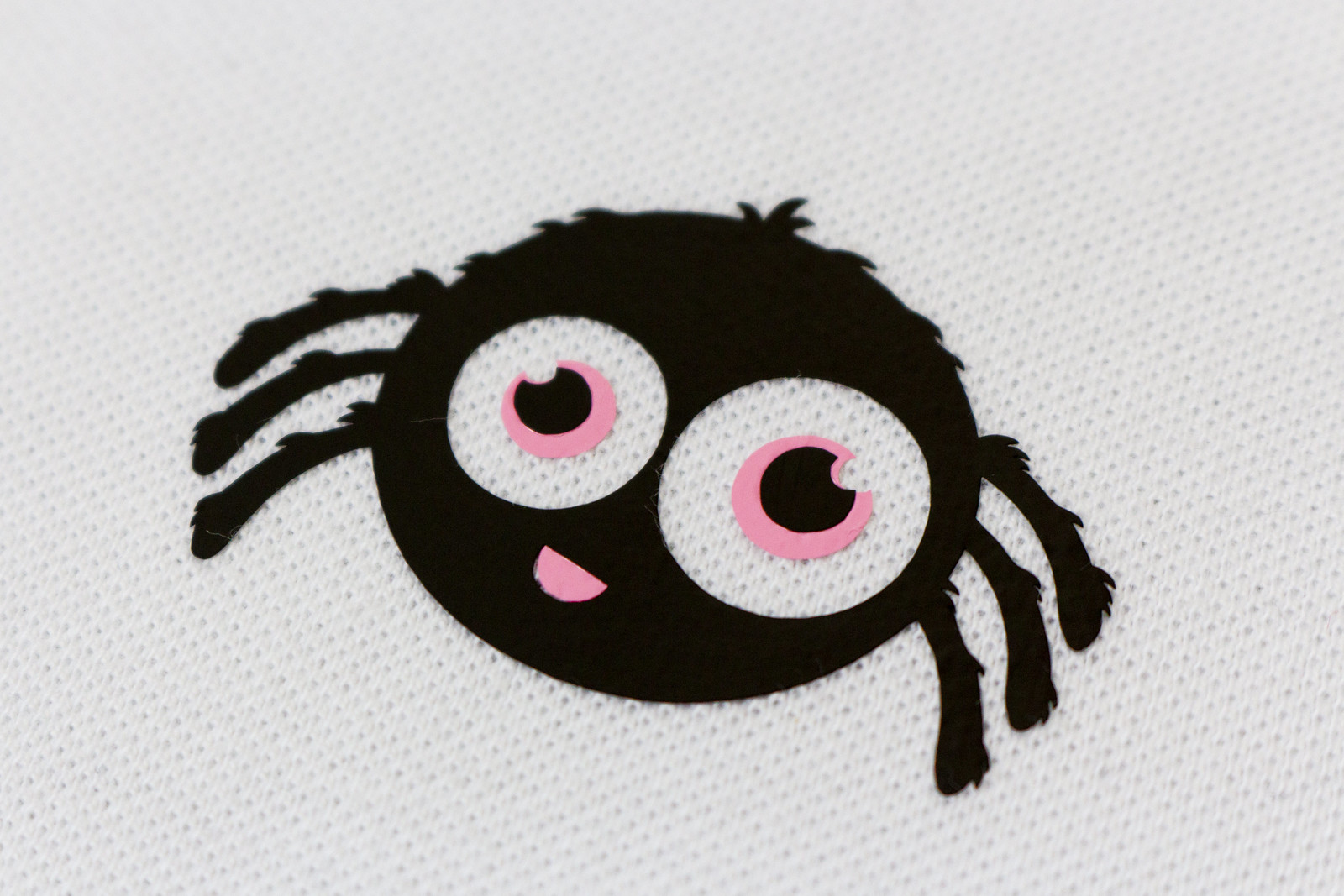 The Narwhal design is my own. The Octopus and Spider designs are both from Miss Kate Cuttables.