Weaving: A New Adventure In Colour And Cloth

A short while ago, for Valentines day, my husband bought me a loom. He’d been threatening to for a while (I say threatening to jokingly, as I had wanted one for a few years and just wasn’t sure what to buy. I thought I wanted a Kromski Harp, and then Suzie of It’s A Stitch Up one day handily confirmed to Russell that this was a good thing to have and before I knew it there was a huge box on my doorstep).

Anyway… it was a good thing. It’s a beautiful thing, and something new to learn (and who isn’t excited by that prospect?)

Russell and I have warped the loom together a couple of times now. The first was a test of the theory, and to get a feel for the idea of weaving and what I needed to look out for. I warped it with the included 8dpi heddle (dpi standing for ‘dents per inch’ – think of it as how many vertical threads are in the woven cloth in its stretched state on the loom) and used a rather heavy DK acrylic/wool mix. I did a fair bit of weaving of nothing in particular. It could have been a scarf, but it was a bit ugly and I felt that I had enough of a feel to start an actual project.

Hazel of Hazel’s Crochet has recently been sharing pictures on Instagram of a beautiful rainbow blanket she has been crocheting for her impending new arrival, and I fell in love with the bright colours that were emerging from the giant 1000m (1094yd) ball of Sheepjes Whirl yarn. I asked what colourway she was using (Jumpin Jelly) and bought the exact same one for my next project. I bought a new heddle for the loom, this time a 12dpi, as I had always intended to weave with lighter yarns, because like many knitters I have acquired an unconscionable amount of fingering weight yarn… Of course I was just buying more at this time, but that, as you will well know, dear reader, is in no way the point.

It took about two and a half hours to warp the loom with 236 ends of yarn, each 240cm long. Warping the loom seems to be a part of the weaving process that many weavers seem to not care so much for. Russell and I used a ‘direct warping’ method that seems to be quick and easy with two people. Essentially, in my very basic understanding, this means that you can measure out all of your warp threads in the process of actually threading them into the slots of the heddle.

There is another method that involves the use of a warping board (The Kromski Harp handily has one built in) which involves the use of pegs placed in such a pattern as will allow you to wind the warp yarns in a meandering path to create long length of yarn over a small space. These are then held with some magical grip to stop them tangling and then placed one by one into the loom. Honestly, this did not seem to be the method for me. At least not for now and whilst I had a handy helper and enough room, especially as my current health problems and medication can make me shake a lot, and the thought of dropping/tangling those warp threads would worry me. This video is a brilliant introduction to the warping board and involves people far more skilled and patient than me. 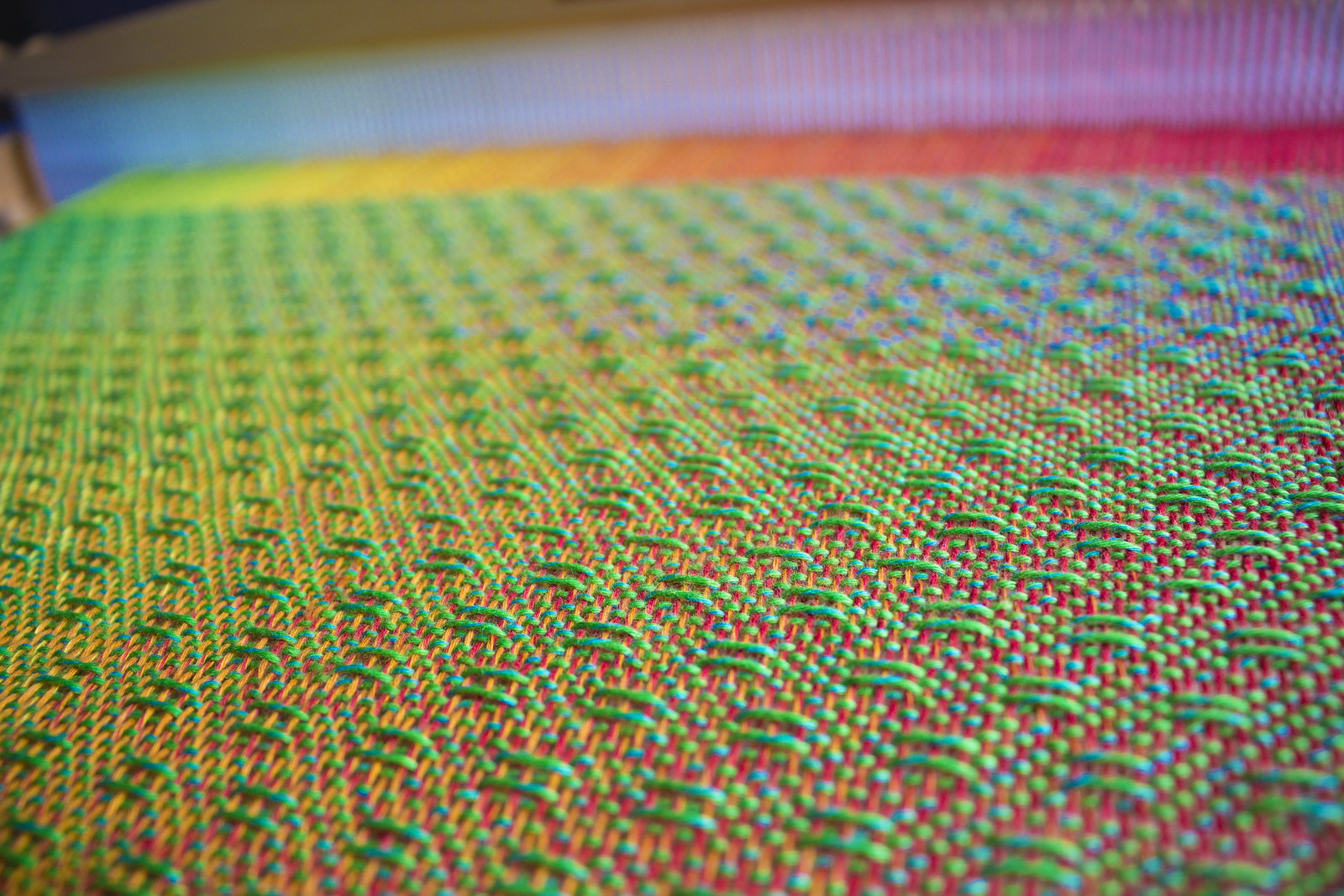 Once warped, I decided to try something a tiny bit more adventurous than plain weave. Suzie, who had enabled my loom-buying husband, was also kid enough to send me on a book she had bought when learning to weave, called Weaving On A Little Loom. There are instructions in that book on adding texture using something called a ‘pick up stick’ – flat pieces of wood or plastic, a bit like a long ruler, to lift up warp threads ‘out of turn’ (in the normal up-down-up-down sense of plan weave) to create what knitters might think of as ‘floats’ for decorative purposes: the little ares of double parallel lines in the picture above is the result of the pick up stick pattern I have been following. Anyone with eagle-eyes and a sense of perfectionism may notice mistakes in the above. Let’s ignore them for now. I know they are there and they are bugging me, but I am trying to let them be.

As an aside –  if you look closely at the photo above there seems to have been a curious occurrence with my camera and the yarn in this heddle that has caused the heddle in some of my pictures to turn into a rainbow. There is no blue or purple in my warp or working yarn (yet) yet these are still present in whatever curious play of light and optics has hit my heddle, and the rainbow extends beyond the width of the cloth I am weaving. I adore it. It will also draw your eyes away from the mistakes. 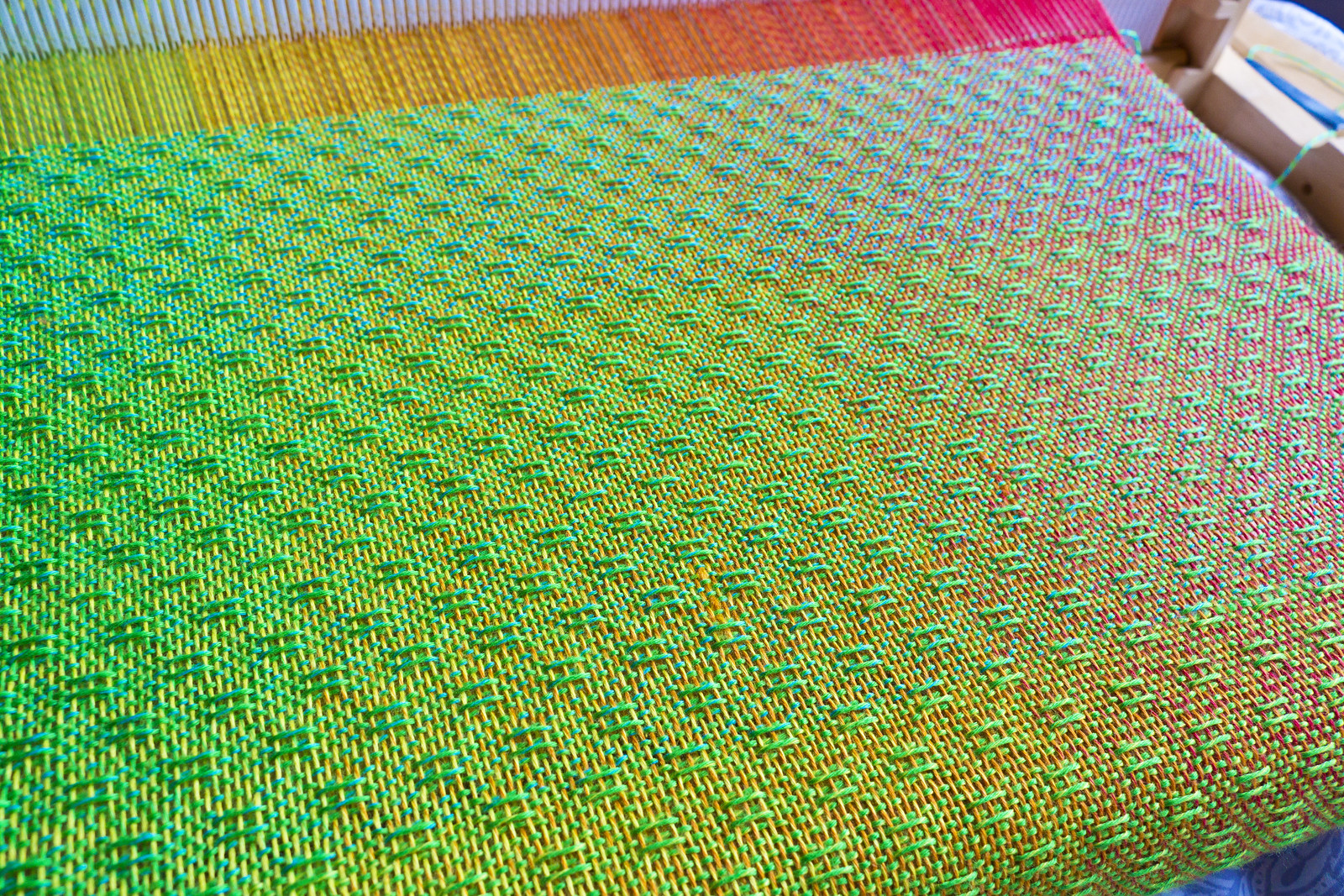 When I was researching if the Scheepjes Whirl would make a good weaving yarn (which I thought it would due to the cotton/Acrylic mix and strength of the yarn) a few of the reviewers mentioned the joins in the yarn. Scheepjes Whirl is a multi-ply yarn and the gradual change in colour is produced by each ply independently transitioning to the next colour in the spectrum (or along the progression of shades in another colourway). This change is a sudden change for that particular ply (from red to orange, for example) but as it is only one of a number of plies the entire change in colour seems gradual. At every one of these individual and staggered changes, however, there is a knot. I had read that most people using this yarn had found this knot to be so cleverly executed and so smooth that they hardly noticed it when using the yarn and that it did not show in the finished project. I think the resulting effect on a woven cloth must be very much more stark because I honestly did not find the knots to be small and inconsequential at all. This is the average size and appearance of a knot along the skein. 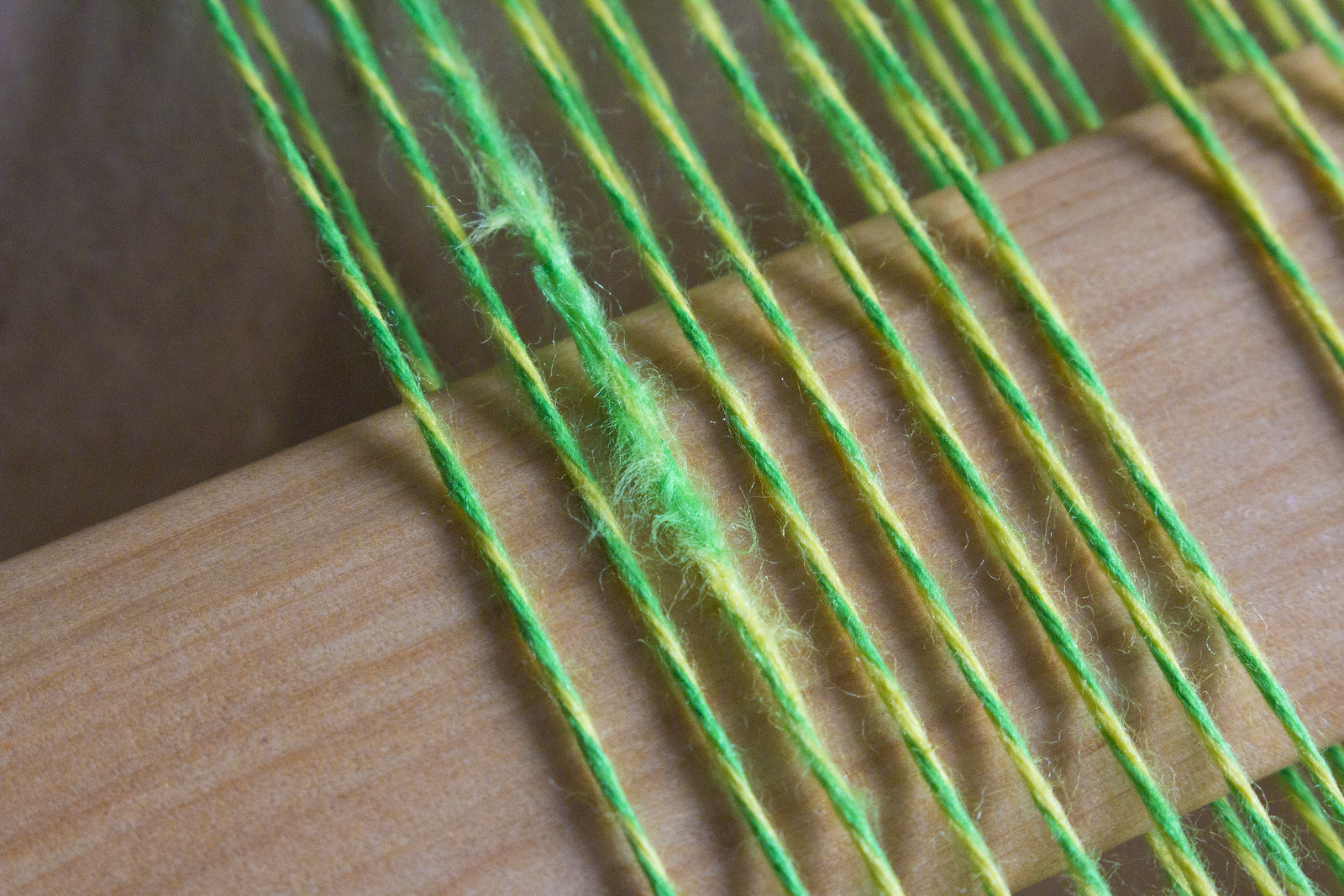 Though the yarn is made of cotton and acrylic, the join almost looks spit-spliced (felting a small length of overlapping yarns using moisture and friction – often water or saliva and rubbing vigorously in palms or between fingers). I am quite nervous of the stability of these areas of yarn on my warp threads, with the added wear and friction of them having to pass through the slots and holes of the heddles whilst being held under tension. So far I have not heard the ‘ping’ of disaster, though it will be a difficult thing to fix if I do as the shifting hues of the yarn mean that I will have no more of that length and mix of colours to add in. I am trying to be very careful in passing my heddle over them when beating down the yarn to compact the weft threads, but they will always be under a fair amount of stress and friction due to the action of the weaving. 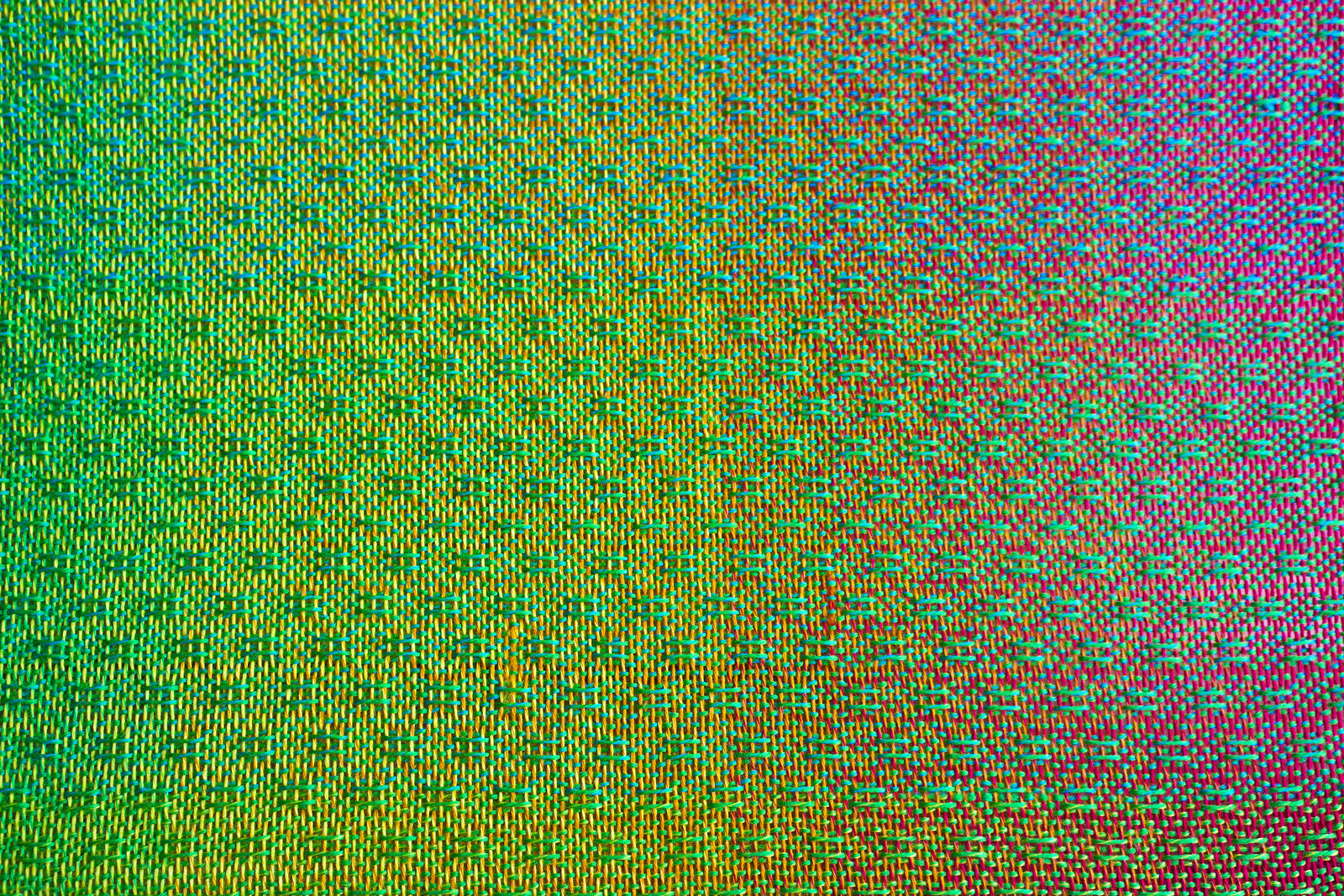 In the actual fabric these appear as little ‘slubs’. They are too frequent to be ignored and yet not quite frequent enough to be a feature, but again I have let go of any notion of perfection and realise that I have a lot of weaving hours ahead of me before I feel in control of the fabric I am producing on a loom (and even then I know that it will determine itself boss any time it chooses).

You’ve also probably noticed the repeated points at which I have only put one float into the pattern instead of two. I only noticed the other night, and can see at least three occurrences in the pictures above, and goodness knows how many already wound onto the front beam. It’s too obvious a mistake to be seen as a feature, but I’m too excited with what I am creating to have it ruin my love of what I am managing to do with this project. I am weaving a rainbow, and I love it. 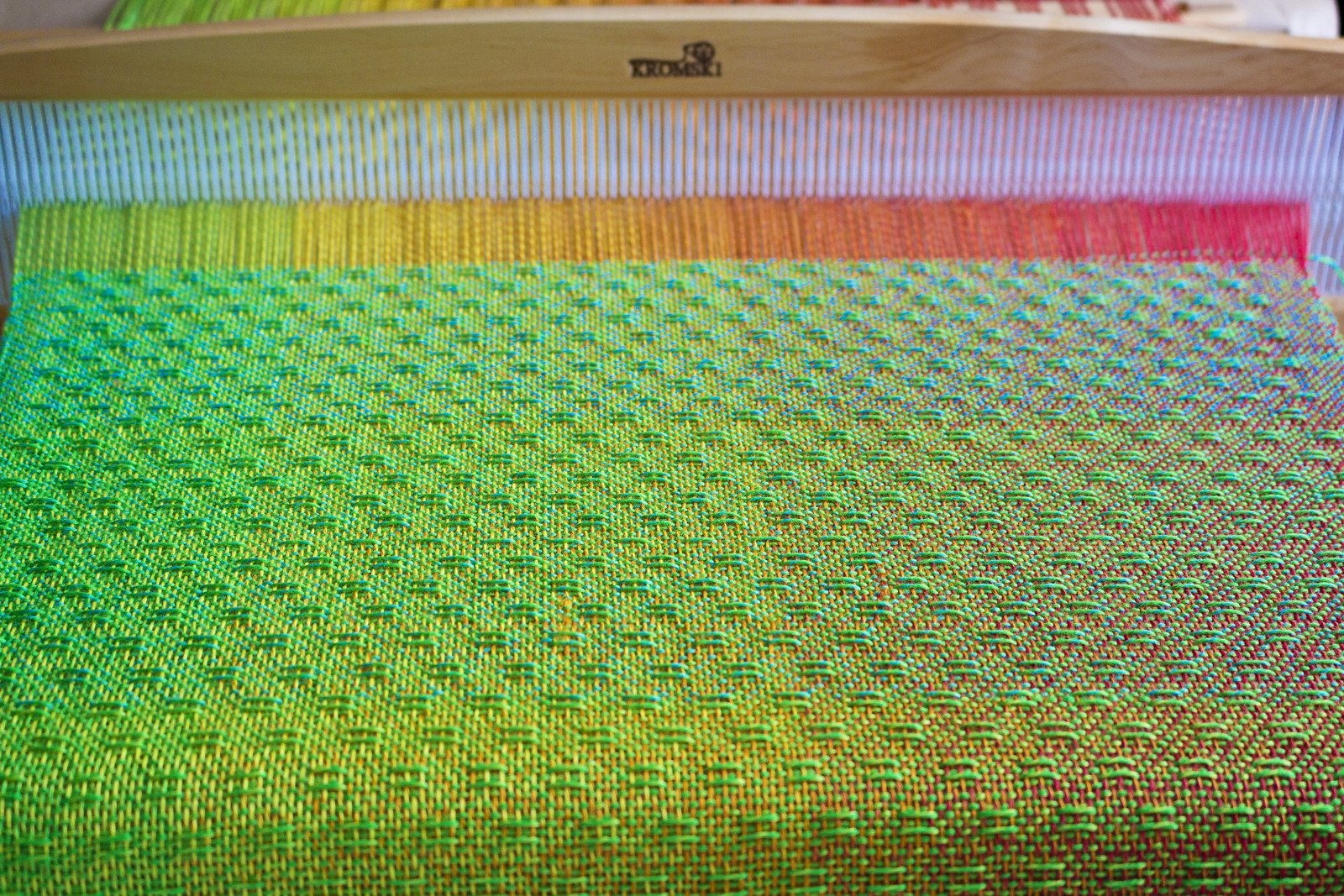 1 thought on “Weaving: A New Adventure In Colour And Cloth”