Someone on Twitter put it so wonderfully when they said ‘this is what happens when your interests collide’. My ‘raindrops and roses and whiskers on kittens’ are knitting, fossils, manatees, trilobites, unicorns and rainbows (I maintain that I loved these last two long before they were cool). I have written a few times of why trilobites are so special and important to me and why they are so symbolic of where my life is right now, so rather than take another deep dive into my thoughts and past, let me just say that I am absolutely thrilled with my latest piece of knitting. It is everything I hoped it would be when I first had the idea to make a tank top scattered with trilobite motifs. 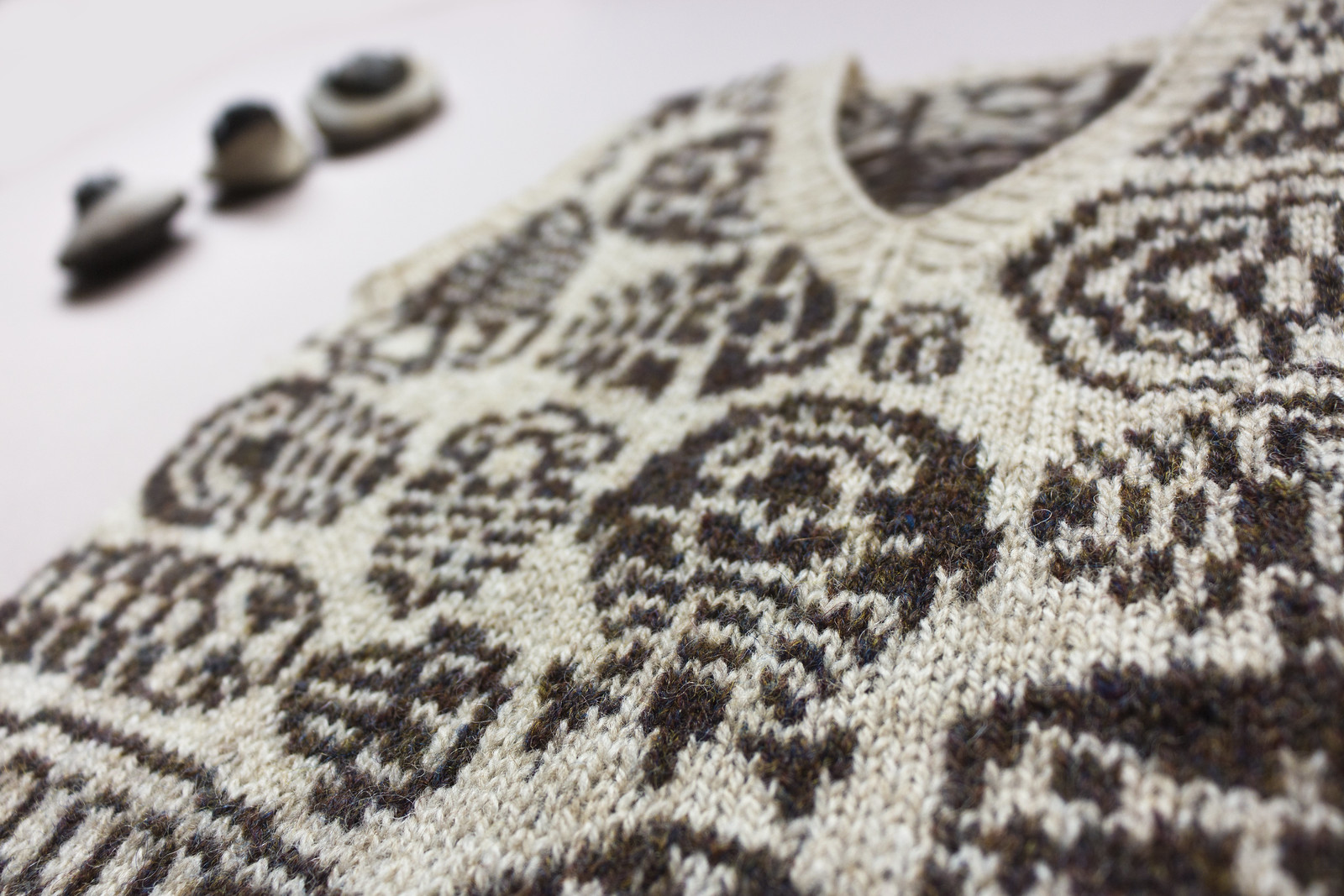 The motifs range in size and form, exactly as the trilobites did in real life. I’m sure you know how cool trilobites are just as well as I do, but in case you need reminding, trust me, they’re super awesome. I wanted to capture some of the traits and differing body evolutionary modifications that the trilobites displayed, but all within what essentially boiled down to only a few graphical blocks. Each of the trilobite motifs is based on one or more trilobite that displayed a particular shape or modification, though they are too simply ‘drawn’ to be thought in any way scientific. 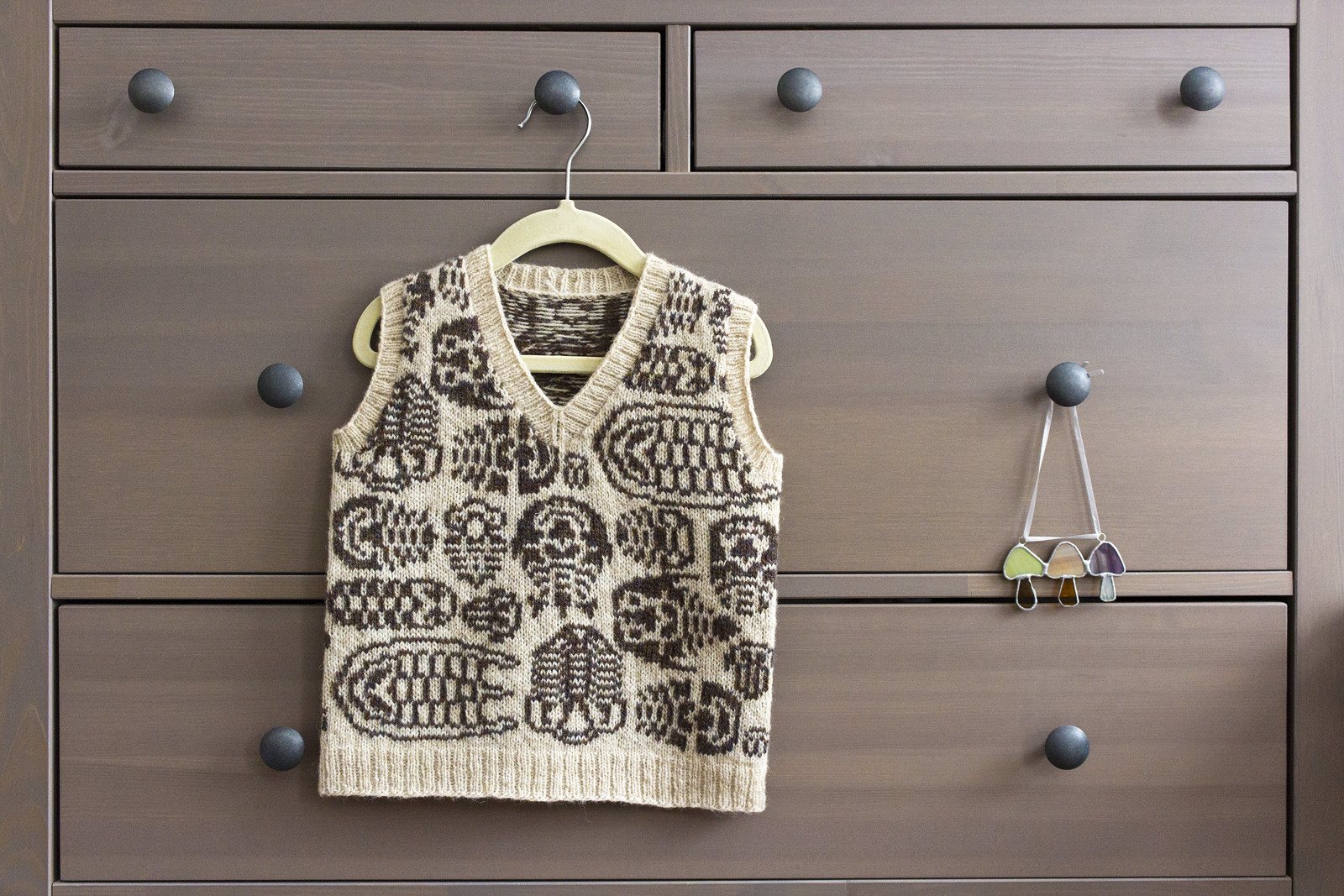 Once I had charted a number of different trilobite forms I set about juggling and jostling them all into place. I wanted them to appear scattered but distinct, but also had to remain aware that I wanted to fill the space to make the finished tank top visually arresting, and also to minimise inevitable long stretches of single-colour open space between the motifs. 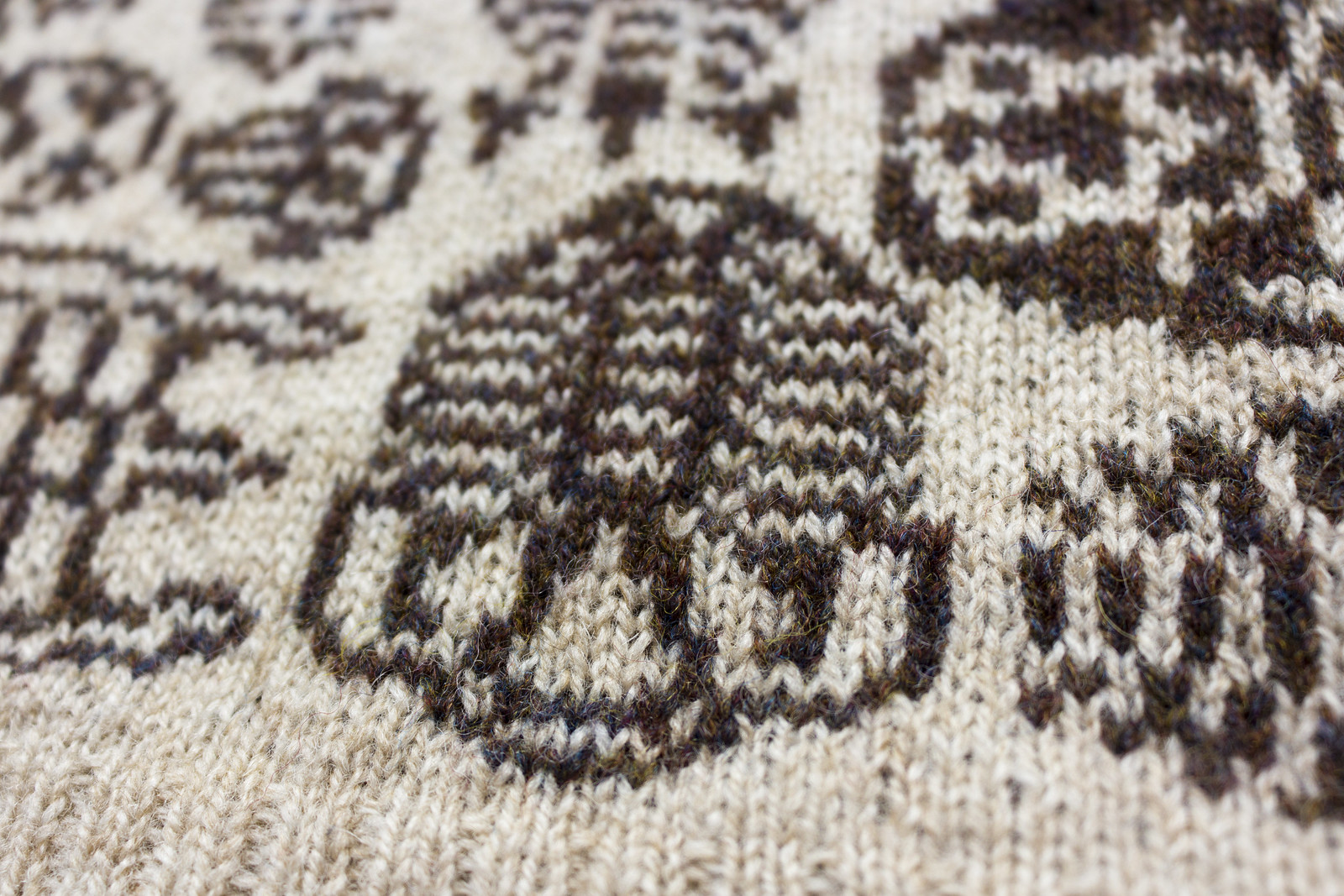 All past colourwork that I have designed has always had a mind towards minimising long floats. As a rule I try to keep floats to a minimum of 6 sts in a regular pattern where I am able, but I knew that this would not be possible when designing the charts for this project. Mindful of catching the longer dark floats in the lighter background colour and how this can poke a little sprouting seed of a stitch through to the front of the knitting, I used to semi-solid or heathered ‘mix’ shades of Jamieson & Smith’s 2-Ply jumper weight to help blend those few areas in as well as possible. 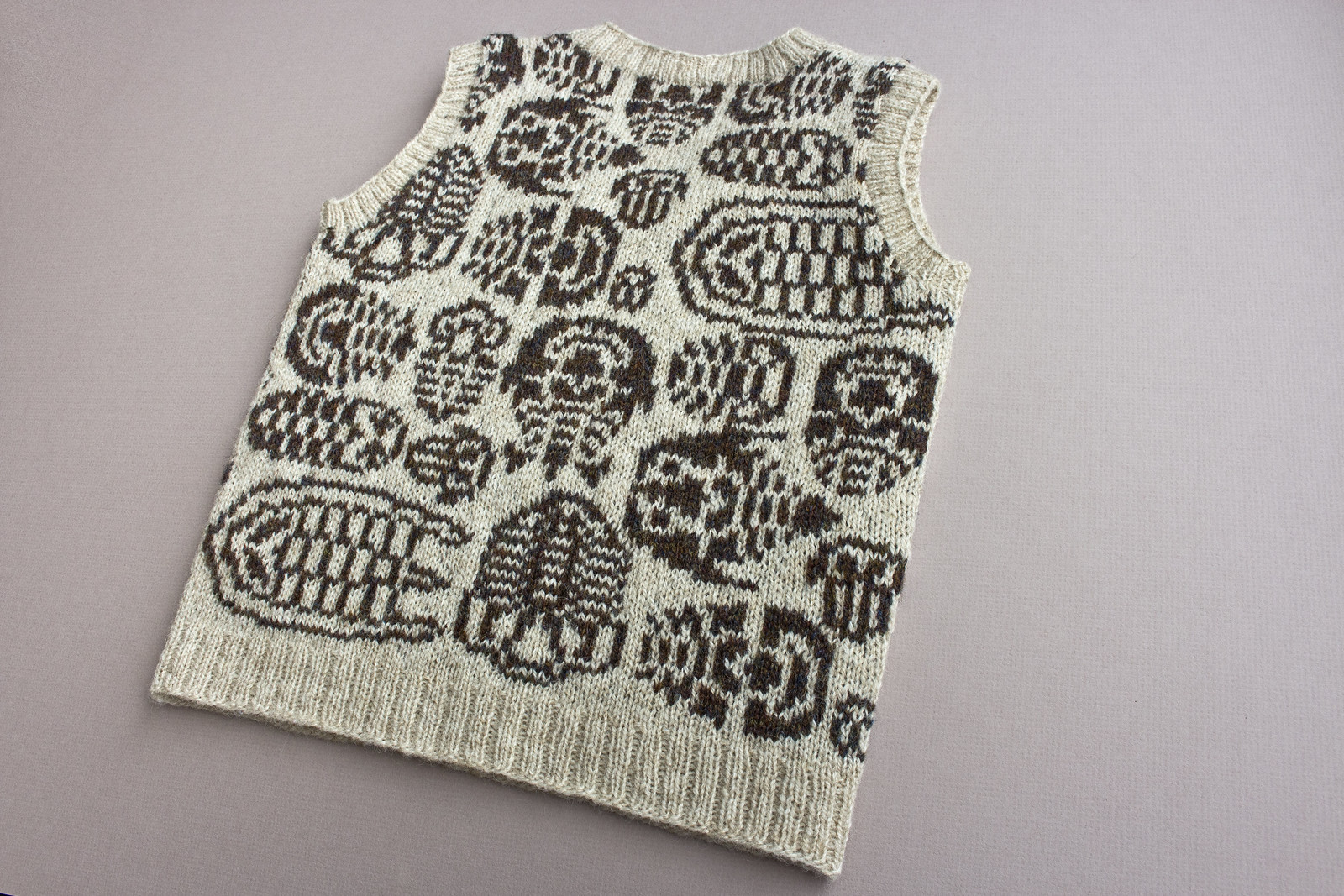 The tank top is knit entirely in the round from bottom edge to shoulders, with the neck and armholes steeked using the steeking technique I learned when knitting Oorik from the A Year Of Techniques project. As my little boy has fast outgrown his Oorik, I decided to make this big enough to fit a four year old (he’s actually only two, but they frankly grow too fast, these miniature people, and I don’t think he is going to mind the extra room too much). I dropped the neckline about an inch and a half, in comparison to Oorik, to allow for his gigantic toddler-head to pass through a bit easier (though I cut off all his hair between casting on and completing the project, so it’s less of an issue now that his giant head-mop is no longer in attendance). 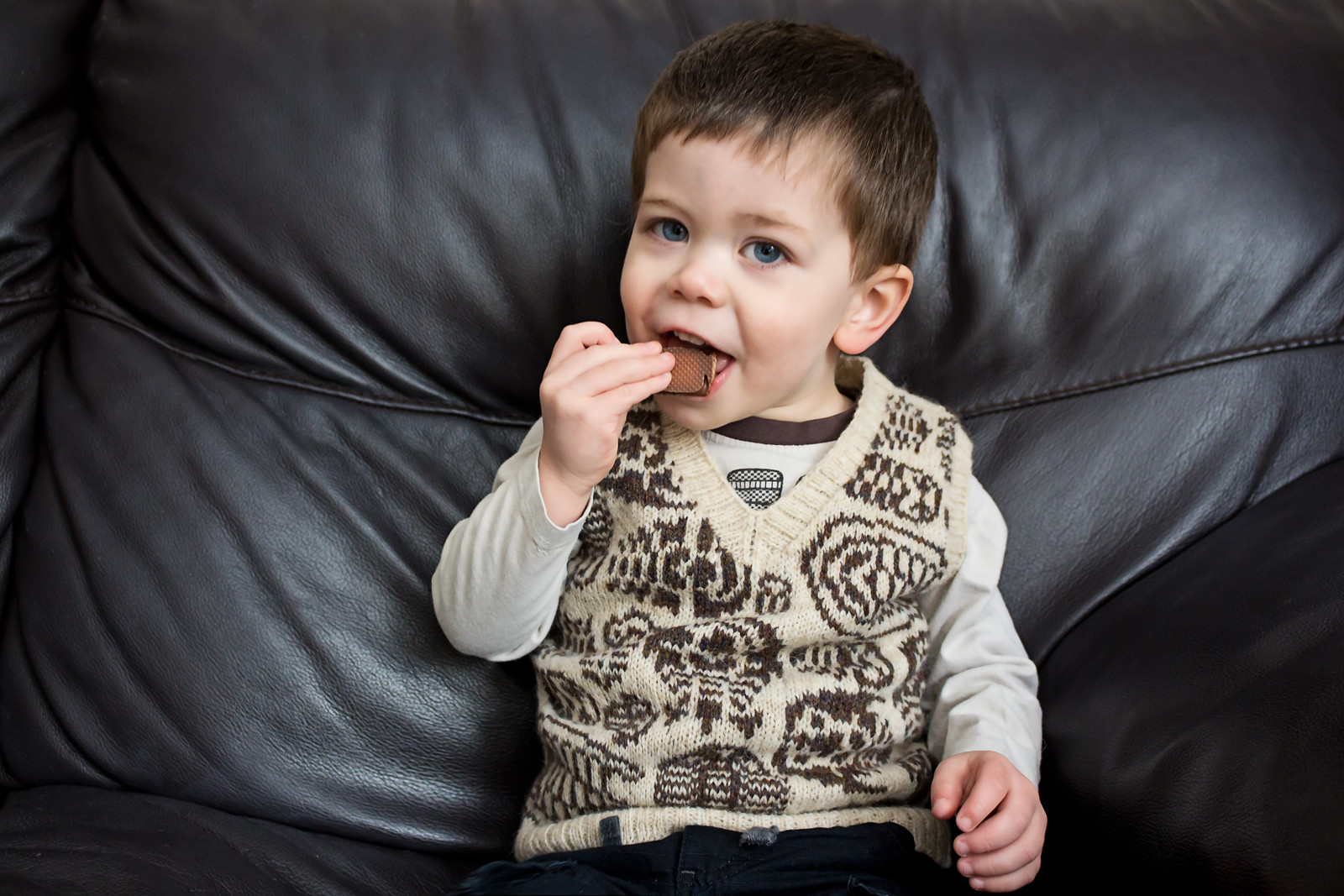 It is of course impossible to get a two-and-a-half year old to sit still whilst having his picture taken. I threw a chocolate biscuit at him in hope, but as he jumped onto the sofa I completely failed at getting him to sit up straight, but it does look great on.

Not all of the trilobite motifs that I drew up made it onto the final piece, due to layout jostling and the required size of the finished piece to fit my gauge, so I may have a think about if there is anything else that I may fancy doing with them as I loved knitting this and am pleased as punch with the finished knit, and I’m starting to think I may need something to match…

See this on Ravelry