I knit Sarah Hatton’s Yellow Wagtail Scarf from the A Year Of Techniques project about four months ago, and I haven’t written about it until now due to not having managed to get any decent pictures. Unfortunately I can’t see that changing any time soon so here are a few pictures whose greatest quality is that they at least exist. 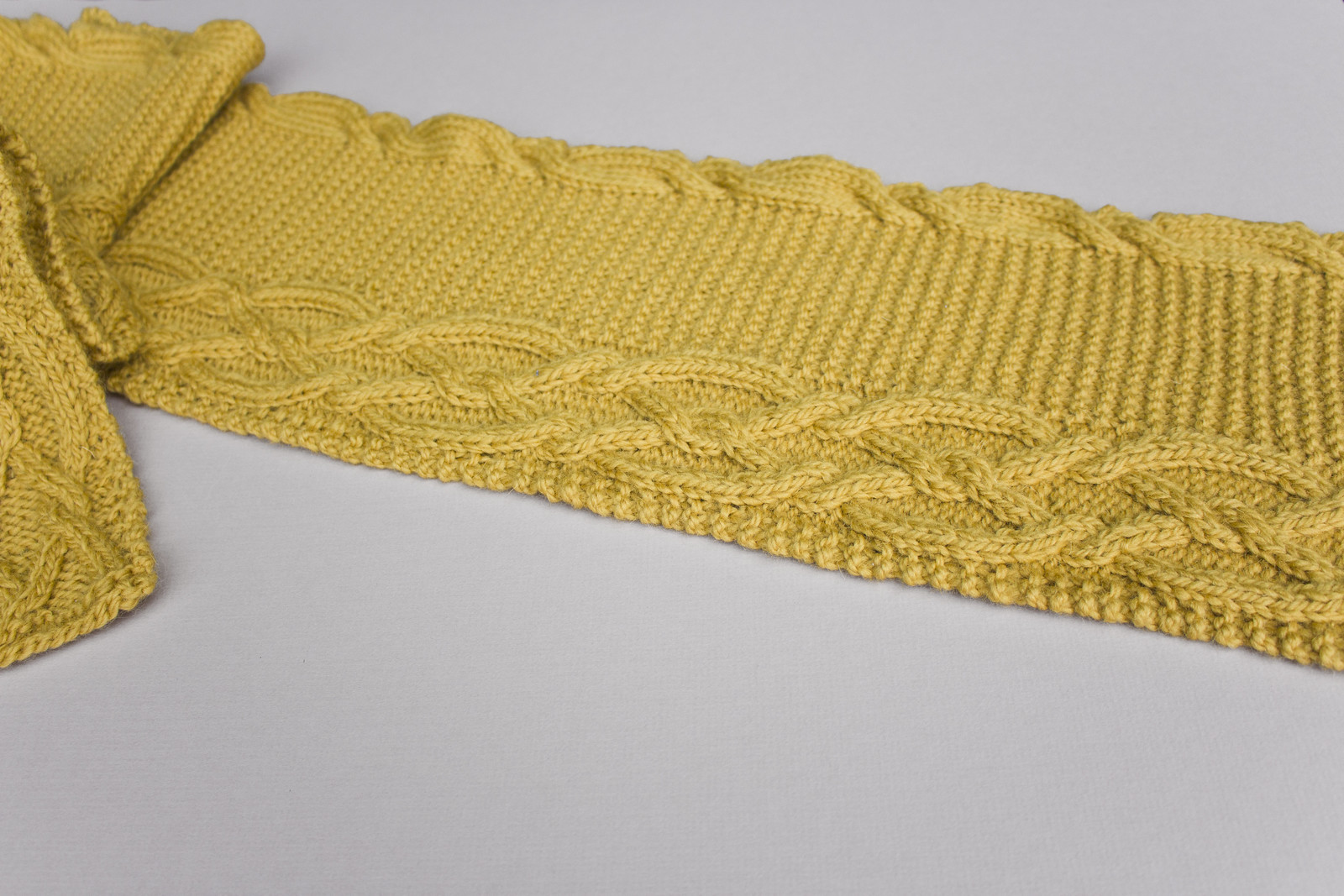 As written, the pattern gives a long (7ft) scarf with relatively narrow ends, widening in the centre, like a perfectly postured, straight spine effortlessly carrying a pregnancy off in style and comfort (ie, nothing like when I was pregnant). This provides a lot of extra fabric of the scarf in the area around the neck for extra warmth. As the scarf is so lengthy, wrapping the scarf twice around the neck feels natural, so you may have a very warm neck and chest for even the coldest weather.

I actually thought that much bulk would be a little too substantial for me and that I would find it easier to style a traditionally shaped scarf of consistent width. The pattern starts with a stitch count of 26, increasing to 53 by the time the centre point starts to near, maintaining that stitch count for a while and then decreasing back down to the original 26. I decided to go with a 41 stitch cast on, increase 3 when setting up for the cables and then knit the scarf with a consistent 44 stitch width until decreasing 3 to account for signing the cables off at the very end.

Apart from the change to the shape of the scarf I made no other changes. The scarf is knit in the kit yarn that the pattern calls for, Shetland Aran Worsted in the shade Auld Gold, seven balls of Shetland woolly warmth. I think I only used 6 balls for my scarf, knit to the same length as the original. It feels relatively weighty, but in a comforting, sheepy way, and the pure Shetland wool holds in a good deal of warm air.

The main design feature of the scarf is the play of the two cable details that run down each long edge of the scarf. Once is a simple, uneven twisted rope type cable, with long and short sections between the ‘twists’ and the other is made up of four intertwining strands on the same garter stitch background that makes up the scarf body. 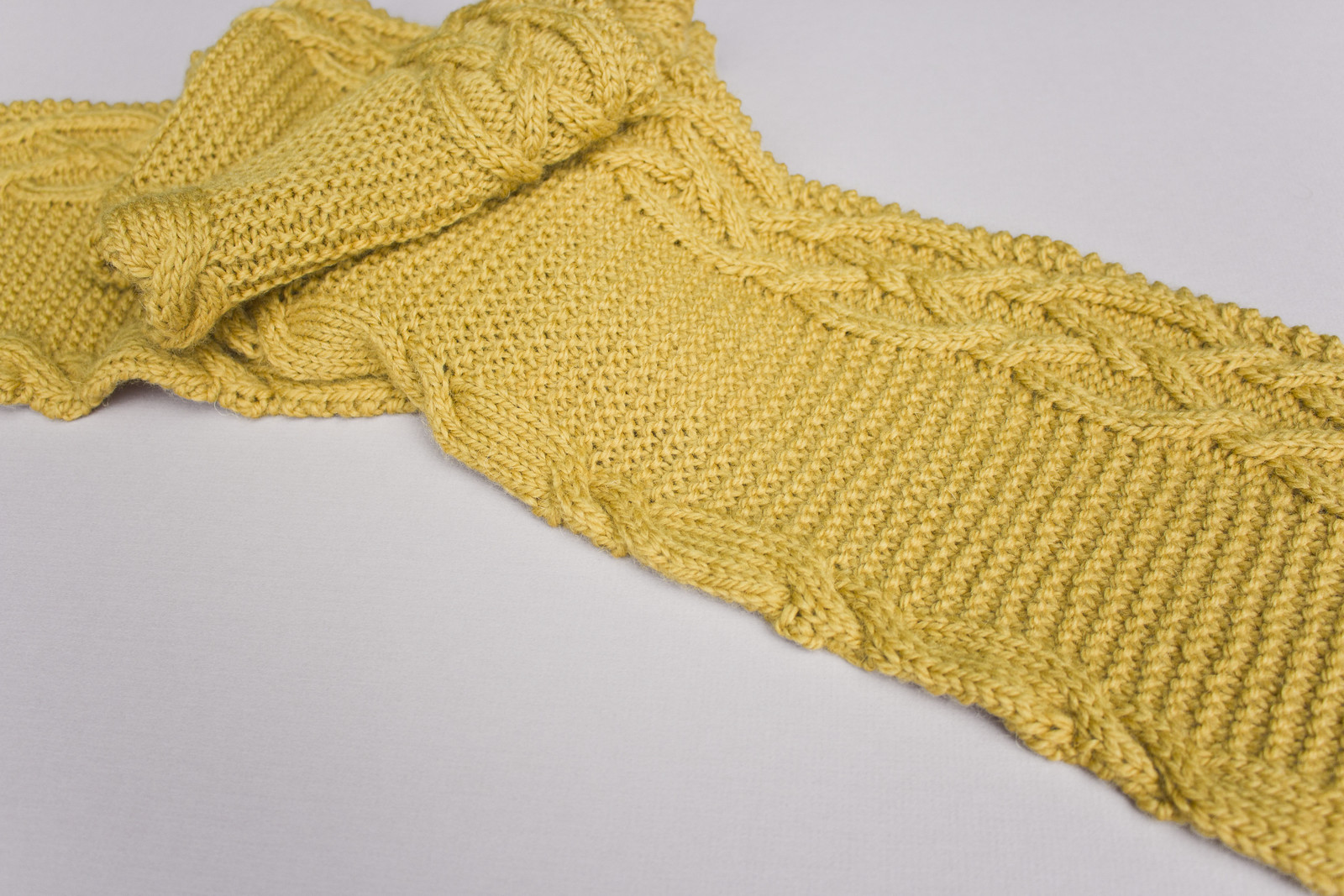 There’s a single garter stitch border that sits alongside the narrower cable which gave me a few issues in blocking. It wanted to fold under the cable (which would have given a nice edge) but still wanted to creep into view at the points where the cable twisted. I think if I were to knit the scarf again I’d have added an extra stitch or two to the border on that side, to match the other, and just bring that cable in slightly, or swatch to see how the edge would look with a different treatment. 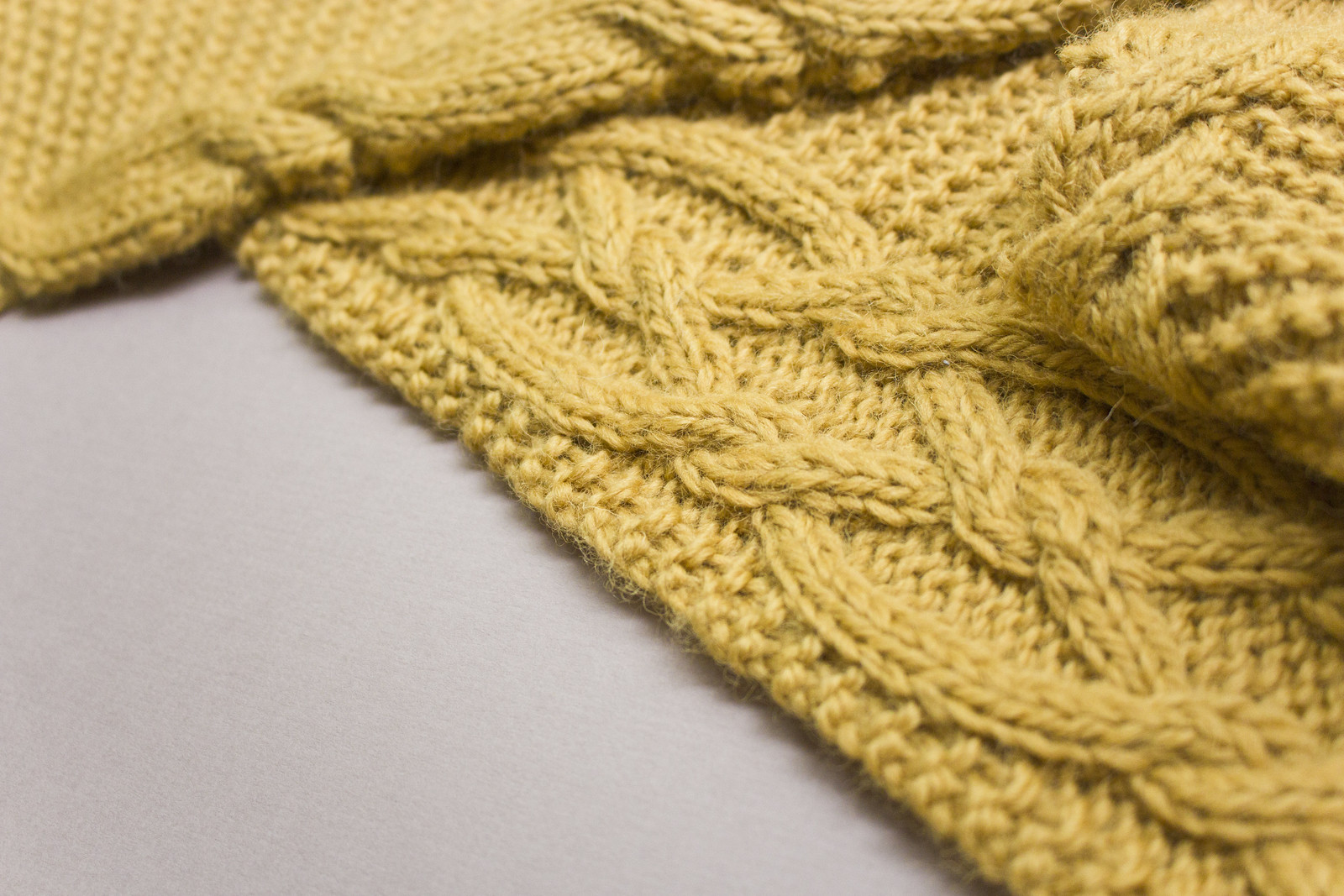 As with all the A Year Of Techniques projects, the pattern comes bundled with a wealth of opportunity to learn something new. The teachings of the Yellow Wagtail scarf were how to knit from a charted cable design, but the instructions also include written instructions for either back-up/comparison or, indeed, for those who do not like nor wish to knit from charts. The lesson is there, and it is comprehensive and well explained, but the pattern does not leave any knitter out in the cold. There also appears to be a bit of a bonus technique included to help people who wish to cable without the use of a cable needle, which is my preferred method. Not only does the technique information give great instructions on cabling with or without a cable needle, but also on visually interpreting the cable stitches so you can ‘see’ what is going on with the knitted fabric to create the pattern. I think cable charts are perhaps one of the most visually immediate types of knitting chart, alongside colourwork, as most charted cable stitches are very representative of the patterns that they relate to.

Though I was confident knitting from charts and without the use of a cable needle, I still thoroughly enjoyed reading the technique portion of this pattern for its thoroughness and clarity and think as both techniques make knitting cables so much quicker and easier that it would be a great learning opportunity for anyone who wanted to firm up their skills with either.