Some time last year I decided to knit my little boy a new tank top as anything I had already made for him was so very quickly grown out of. I decided to design the tank top with trilobite motifs, simply as a challenge to myself and because it would be something that I would enjoy knitting (and who knows how long he will be happy to wear a trilobite tank top hand knitted by his mum… my days for this sort of thing may be numbered!)

I designed a selection of colourwork motifs and fit them into a canvas of the right size to fit my gauge and desired finished dimensions, and set about knitting. Unsure of cutting the yarn usage fine I began with a provisional cast on (in orange) to unravel and add ribbing once the colourwork was complete. The yarns I used were a couple of light fingering weight yarns. The lighter colour was from Theresa Shingler Knits, a nice semi solid yarn spun from British wool with a good amount of grip. The darker yarn I have (annoyingly) lost the label for, but it’s a stark contrast to the first. Though it’s hard to see in this picture, it is a high sheen, very smooth yarn with a lot of drape. There’s definitely some silk content in there along with merino, but I cannot remember the proportions of each now that I have lost the label. I just cannot seem to do justice to the colour in any photograph, but it is a yarn of darkest plums and teals on a bed of brown/grey. Though these two yarns do not sound very suited to each other, they exactly mirror the dark, shiny fossilised trilobites in their sandy matrix of some of the specimens that I own, both in colour and texture. I worked up a swatch and washed and blocked it to ensure that the finished piece would hold its integrity, and it did. The grippiness of the lighter yarn was enough of a framework to ensure that all the colourwork remained neat and that the stitches did not creep or distort. 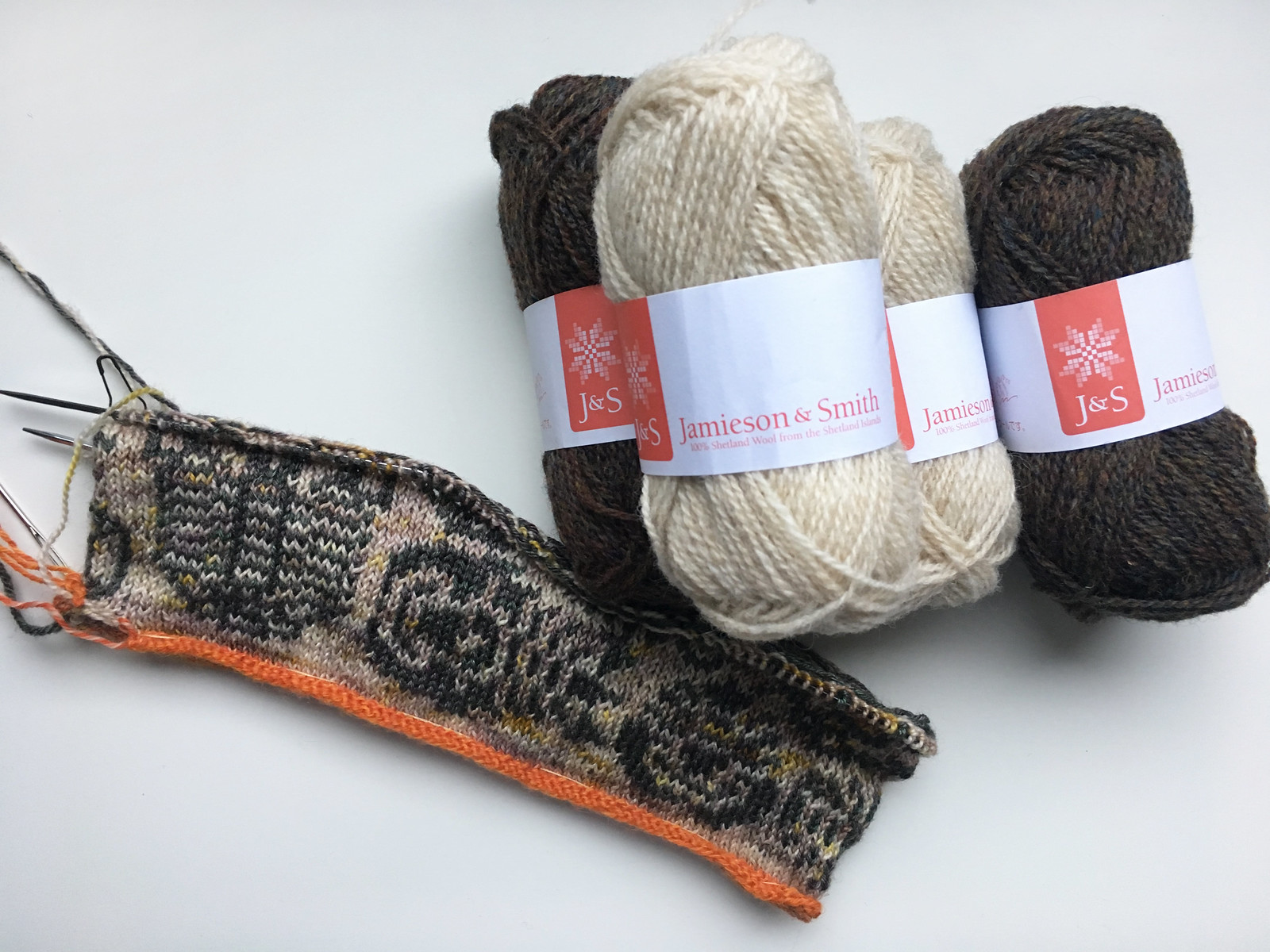 The plan had been to knit the tank top in the round to the armholes, then split for front, back and neck and knit the pieces flat from thereon. However, then the A Year Of Techniques project surfaced and threw all of my plans in the dustbin. One of the techniques that was to be covered would be steeking, one of the knitting techniques I was yet to try, and which I thought might be very useful for future projects. I put the tank top on hold both as I wanted to knitalong with a few of the Year Of Techniques projects and also as I wondered if the prospect of steeking might alter my plans for knitting and finishing the trilobite tank top I had started.

As it happens, all of my greatest wishes for the steeking project were realised, as the project in question was the Oorik Tank Top: a stranded colourwork tank top sized for toddlers. fortunately for my future knitting projects, steeking was simple and very handy for what I wanted to achieve. Unfortunately for the trilobite tank top I had started, it was the very last technique covered in the projects, and though the final six patterns were released together six months after the project was launched, those six months proved enough time for the rapidly increasing size of my toddler to outgrow the tank top I had started, so I decided to unravel what I had and begin again.

Some people say you should never knit directly from a skein of frogged yarn. Honestly, I think this is a matter of personal preference rather than a hard or fast rule. I knit a pair of long socks from a double strand sock blank (one of The Yarn Yard’s ‘Magic Carpets’) and they knit up just perfectly, and many people knit socks directly from dyed sock blanks with no issue. However, I think it can be very important to wash and re-skein yarn that has been reclaimed from a partially knit garment. As with this tank top, only some of the yarn had been knit. Yarn that is buckled and kinked may knit to a slightly different gauge than when straight, and the relaxation of all that texture once laundered may cause a shift in the texture, drape and gauge of knitting part way through a finished garment. Similarly, highly buckled yarn can present problems when knitting stranded colourwork as the floats and edge stitches can sometimes cause tension issues and skewed stitches.

Re-skeining the yarn is a simple process if you have a niddy noddy or skein winder (or a couple of chair backs pushed close together, at a pinch), and makes the yarn much easier to store and care for, and (to me) presents a much nicer prospect to knit again in the future). I used my lovely niddy noddy to re-skein the reclaimed yarn. It’s a commercially produced tool, but I have in the past made niddy noddys out of bits of broomstick and plastic pipes, which work in a pinch if you are on a tight budget.

Once re-skeined and fastened with three or four figure-eight ties simply pop your skeins into some lukewarm water. I add a drop or two of a no-rinse wool wash such as Soak to just freshen the yarn up, but unless your yarn is dirty or dusty through handling or from sitting a while in a yarn basket, the purpose is mostly to get the skein back to being straight and smooth. 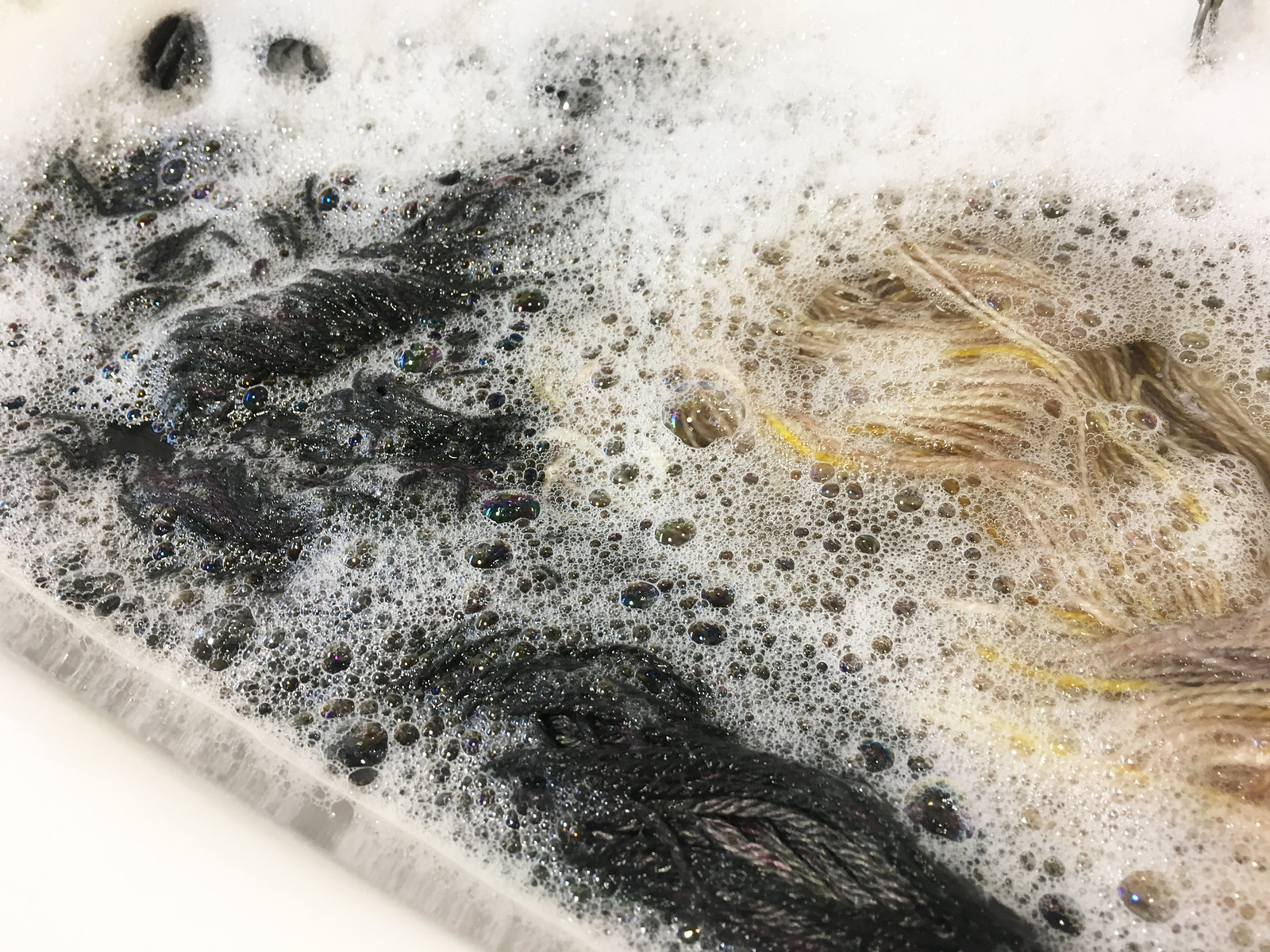 If only some skeins of yarn were knit up, it is important to wash them all together. Some yarns may be prone to shrinkage or, indeed, relaxing and ‘blooming’ when introduced to water for the first time (a reason your swatch should always be washed and dried before measuring and the final fabric assessed) so if only some of your skein(s) of yarn have been through a wash treatment then the final gauge of the previously washed and un-washed portions of knitting may differ when the entire garment is laundered. The quick rule to bear in mind is that all of your yarn should be in the same state when knitting. It should all be kinked or it should all be straight. It should all be unwashed, or it should all be laundered together.

So, as my yarn was only partially knit, I gave it a little soak, pressed the excess water out between two towels and then hung the yarn to dry. 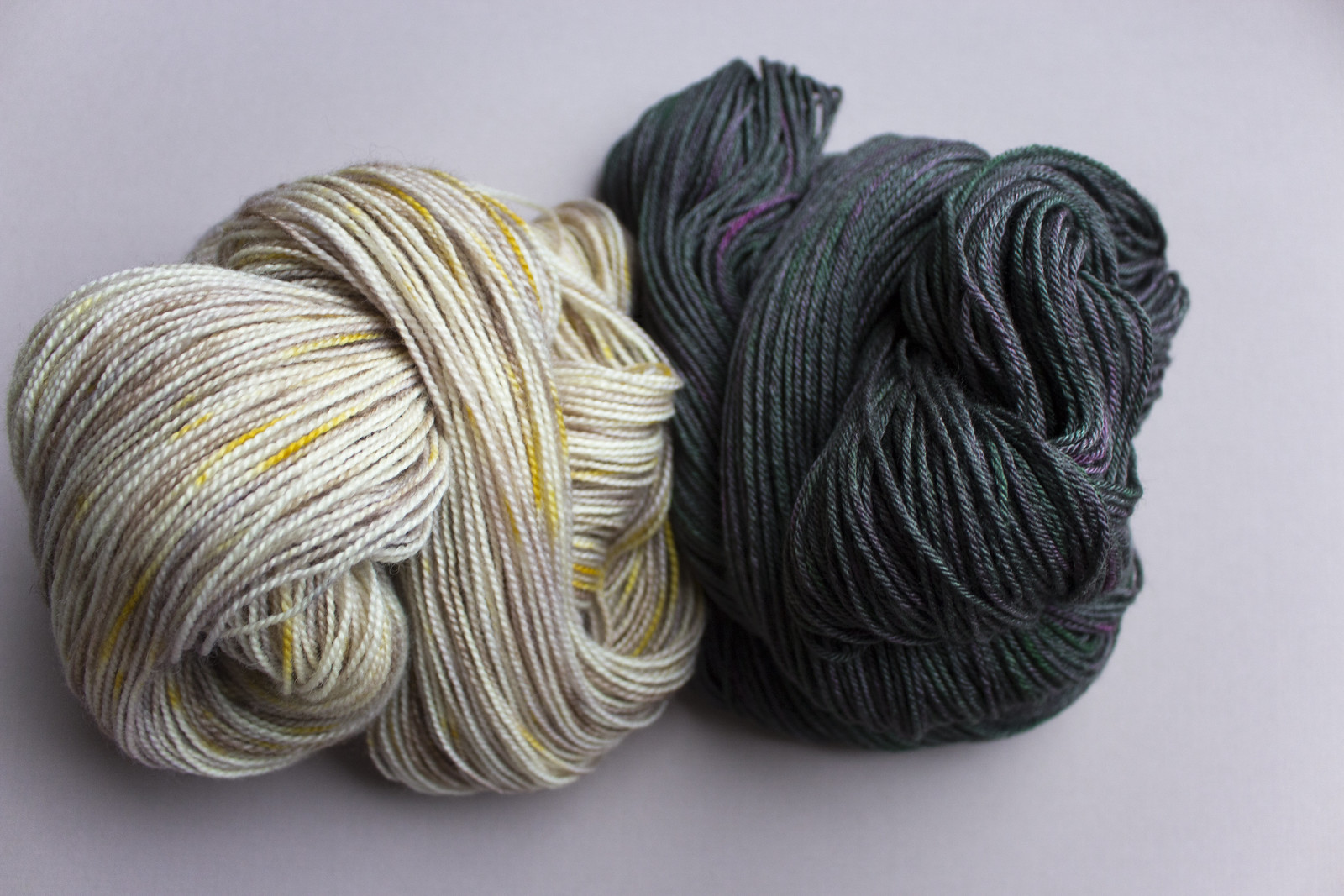 The re-washed yarn is as good as new and a pleasure to look forwards to knitting again. However, I decided that after knitting Oorik that I would make things easier on myself and get some new yarn for the project, some Jamiesons & Smiths 2-Ply Jumper weight, a lovely, super-grippy shetland wool, and the same yarn in which Oorik was knit.

Alongside the previously knit portion of tank top, the darker yarn in particular is not quite as perfect as I’d had, but what I have lost in the sheen and subtlety of colour variation I have definitely gained in ease of knitting. Shetland yarn is so inclined to grip to itself that steeks often do not need reinforcing at all, though I will pop in some crocheted reinforcements so that it is guarded against the super wriggly and very explorative tendencies of a two year old. Colourwork also tends to stay flatter as the stitches stay where you have put them, and do not slide around as they can do with a smoother yarn. I could have steeked with my previous yarn choices, but the smooth and silkier of the two yarns would definitely have required some sewn reinforcements from the sewing machine to keep everything secure and that silky yarn safely in place. 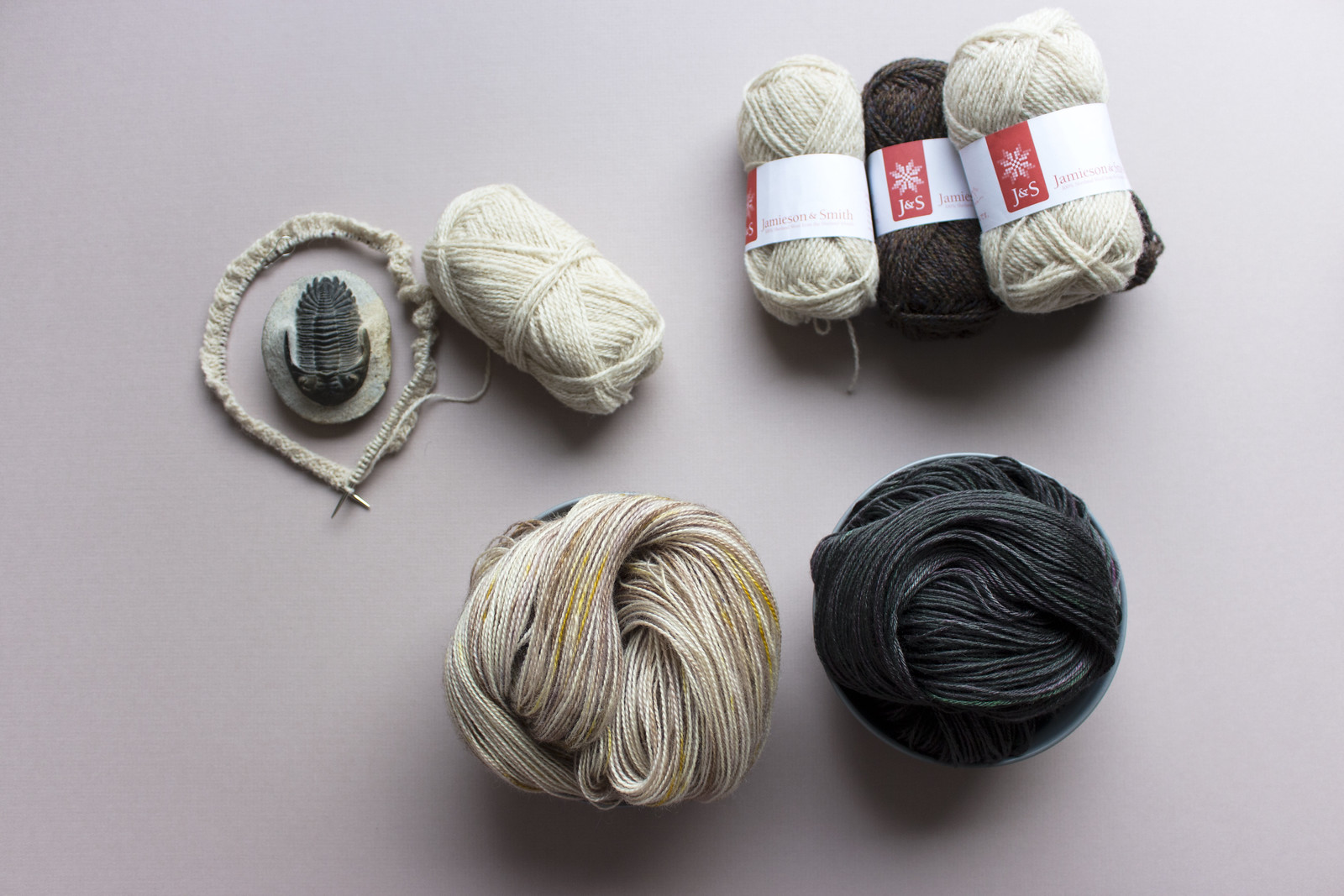 On top of the change in yarn, I have also had to change the charts that I was working from. A different gauge in the new yarn, as well as that growth spurt have meant that I am now working on what feels like the hundredth iteration of my trilobite charts, but hopefully this will be the final version, and I have about twenty different trilobite motifs to work into future projects. The actual motifs I am using are the same, but they are in a completely different arrangement to work with the current stitch count. 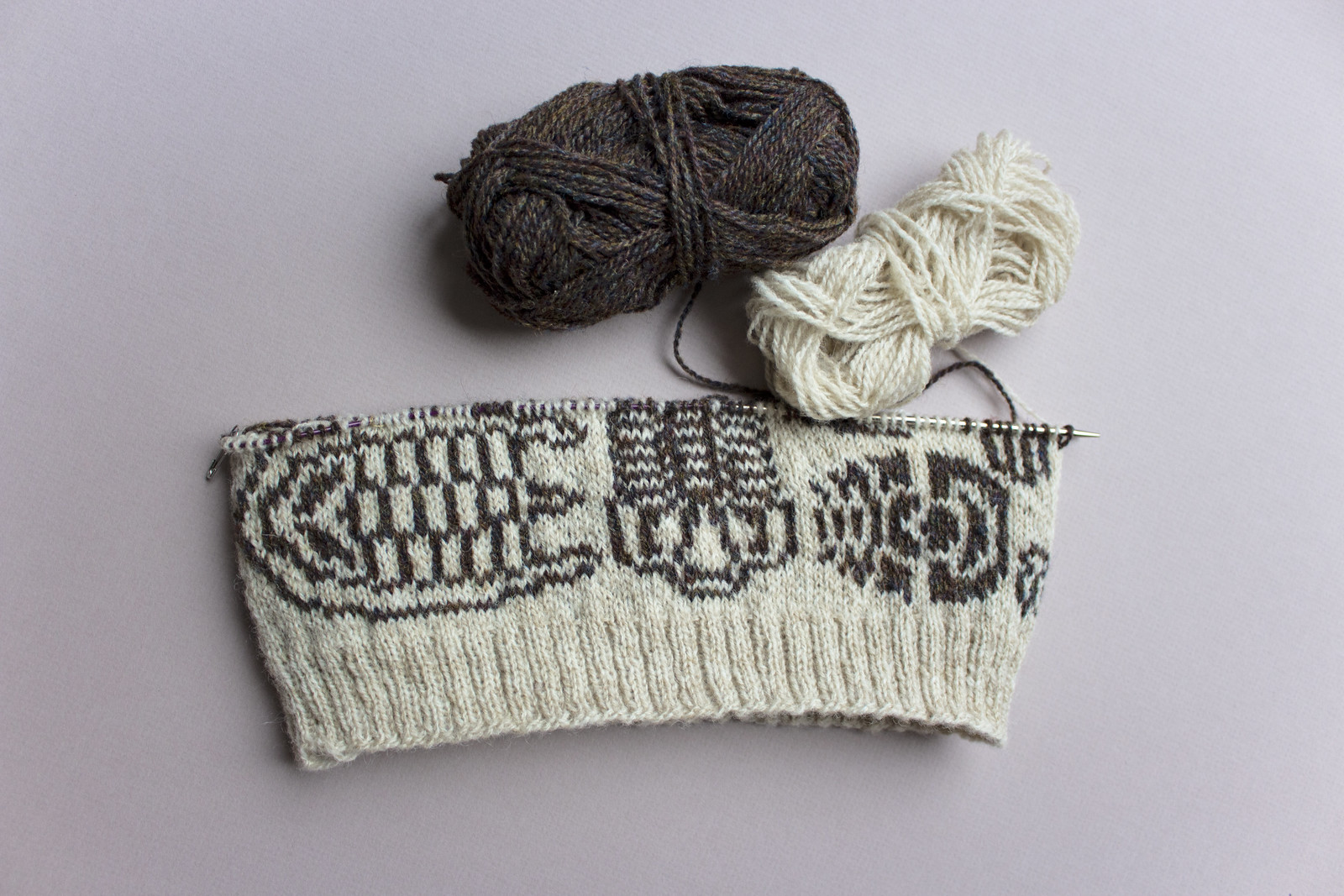 The contrast in colour between the two yarns is now greater, which makes the images more defined. It is not wholly my first choice as I did like the way that despite the difference in the textures of the two yarns, the slightly reduced contrast made the ‘fossils’ look as though they could be emerging from the stone, but I can see that the shapes are far more immediate now that I am working with two yarns more solid in colour.

Now that I have made the changes and rescued my last yarns for another day, this project is galloping along, and I hope to have this trilobite fossil tank top finished before too long.