I haven’t spun in a long while. I’ve spun on and off for the better part of ten years, first on spindles and then I later bought myself a spinning wheel as a congratulations to myself for persisting. It was one of my more symbolic purchases along with my first trilobite as both were things I had harboured dreams of owning but often didn’t think I would ever have. I would knit more often than spin so it seemed an extravagance, but it was wonderful knowing that I could spin and make yarn that I would cherish knitting any time I wanted. And I have made what I think are a few nice skeins of yarn both on the spindle and on my wheel.

I don’t know if I spin ‘correctly’. I am sure that I do not spin in the best and most widely recognised style, because I somehow have got to this point without ever actually seeing another person spin either in real life or on a video, or even having read a book or website on the subject. I was sent my first spindle by a friend many years ago and sort of figured that out: how to set it spinning and pull out a fine sliver of fibre whilst it was going, to twist and then wind onto the spindle.

When I bought my wheel I set my husband to the task of putting it together, and once I worked out which each bit did and how to attach the fibre to the bobbin, I just sort of migrated and adapted what I had learned on the spindle. I probably have a lot that I could learn and improve on, but I also create yarn that I do enjoy knitting with, which is what I want for now. I would like to learn to spin a heavier ply as I seem stuck at one particular ply weight, and if anything prompts me to learn a bit more and seek help it will likely be that. 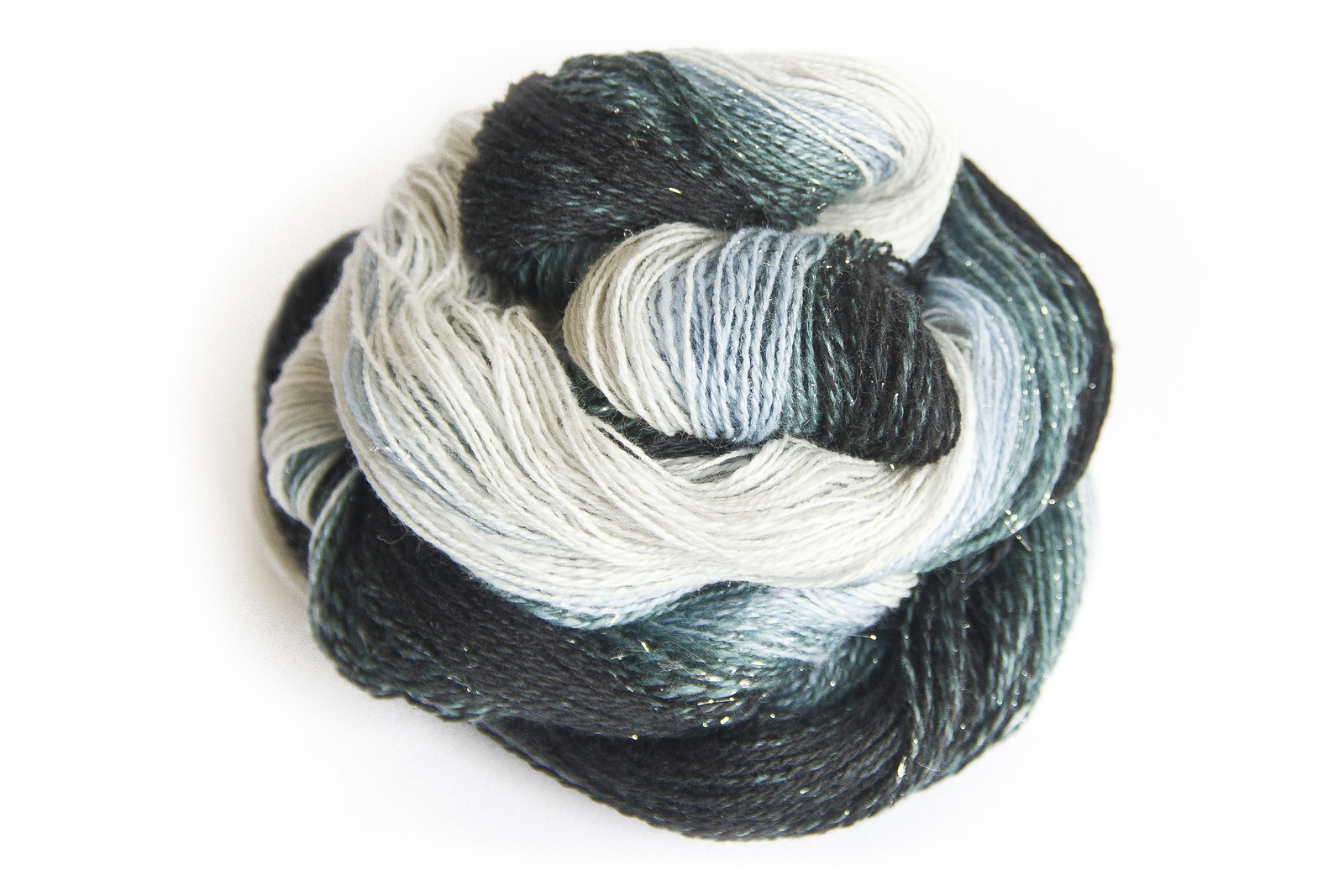 But I have not done any spinning for a while now. When I was pregnant I did not carry gracefully or comfortably, and my baby was training as whatever the solo version of a synchronised swimmer might be. Arms, legs and bony backside jutting out everywhere. His bum was so bony that one midwife we saw during a late pregnancy check up confused it with his head. It’s a problem we still experience today.

When the screaming pink wrinkly thing came into the world there was a brief time when I took spinning back up again, and I started spinning some fibre I bought whilst pregnant, but the period of time when a baby is content to lay still and look up to you with adoring eyes is all too short, and soon enough he was off wearing at the knees of his sleepsuits, crawling to explore all of the things he could touch, and so the wheel was moved to another room of the house.

Only these past few days have I told myself it’s really not that much work asking my husband to bring the wheel in from the other room, and I have started spinning up three plies of yarn from a set of Hilltop Cloud Rainbow Sprinkles. To mitigate the fact that I can only seem to spin one weight and would like to knit a slightly thicker yarn, I have decided to spin this selection of fibre up as a 3-ply yarn. 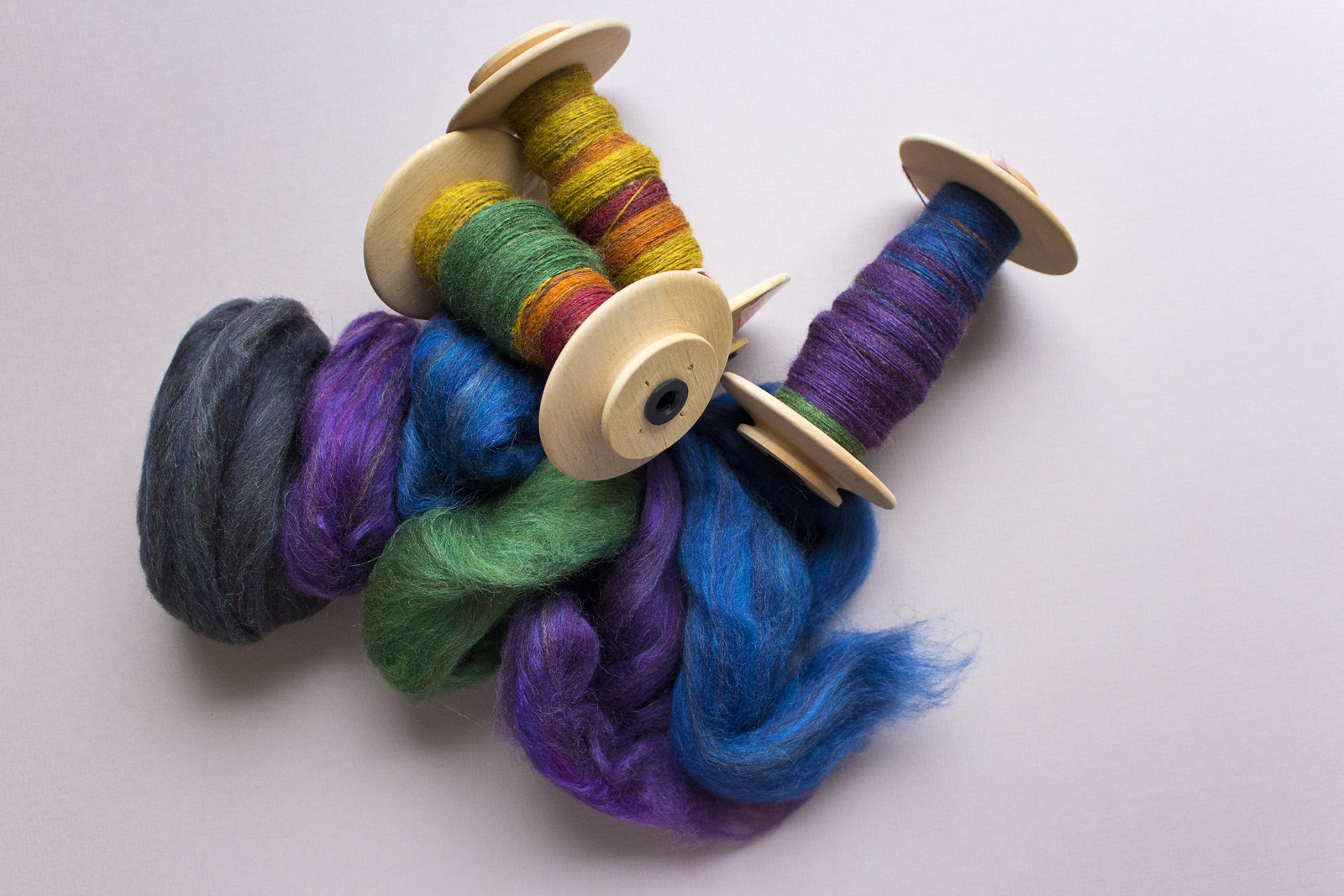 The set consists of 160g of fibre made up of 20g each of eight colours: white, red, orange, yellow, green, blue, purple and charcoal. I wanted the skein to move through the shades in that order, but I also wanted to stagger the transitions slightly, so I split each of the six spectrum colours into three equal sections (by eye, I don’t spin consistently enough to make precise fibre splitting advantageous) and the white and charcoal sections I split to be purposefully unequal. I started by splitting the white skeins into three equal(ish) sections, then I split one of those sections in half and added one of those halves to one of the other sections. Essentially (if my maths is right), one of the sections of white fibre is ¹â„â‚† of the total, one is ²â„â‚† and the other ³â„â‚† (or â…™, â…“ and ½). By adjusting the amount of white yarn spun onto each bobbin hopefully each of the colours that follows afterwards will be similarly staggered, and I will reverse the proportional split when ending with the charcoal yarn to give a roughly equal total spun length on each bobbin.

Like pretty much everything else I am just guessing at what I am doing here, so it might not work at all, but if luck is on my side I may have something interesting result from this spinning experiment soon, and then I’ll just have to think up a suitable project.

May the new year continue to bring creativity and enjoyment!