If you don’t watch Hey Duggee I firstly entreat you to do so. You don’t have children? Doesn’t matter. Duggee will make your day better. He is the Harold Bishop of flash animated dogs, and the whole show is made with love and joy. Each episode is crafted with a love for the subject and process that any creator passionate about their work will recognise. Also, they have a fondness for glitter and paint that I think we can all appreciate.

As my little boy loves Duggee so very much I thought I would update the counting flash cards I had blu-tacked to the wall to help us count to ten together with something a bit more colourful and handmade, and so I have put together a number bunting featuring Duggee and the Squirrels (his troupe of scouts, not one of which is actually a squirrel).

The Official Hey Duggee website has free colouring sheets to download and print, and I used these as the basis for my banner. I printed these out and enlarged them a little so that the counting bunting was as bold and cheerful as I could make it. Using my ‘carefully amassed’ felt stash I had all the colours hat I needed to make each of the six main characters of the show, apart from, rather annoyingly, the black felt for the eyes and mouths which I had to send off for.

Using sewing/quilting clips I cut out each of the shapes from the paper print outs and clipped these to the felt, trimming to a rough 5mm all around before cutting out each shape accurately. I assembled the pieces first using a hot glue gun, which worked well but was a bit fiddle and/or burny for this clumsy oaf, and then reverted to using UHU Power glue. It’s important to use the UHU Power version as I have tried normal UHU for sticking felt before now and found that it soaks in too much to give a fast grip. The power glue holds well and the only thing to take care with is not to put too much on and to spread the line of glue quickly and thinly to stop it soaking through thinner felt layers, as it will show through if it’s allowed to penetrate to the surface. 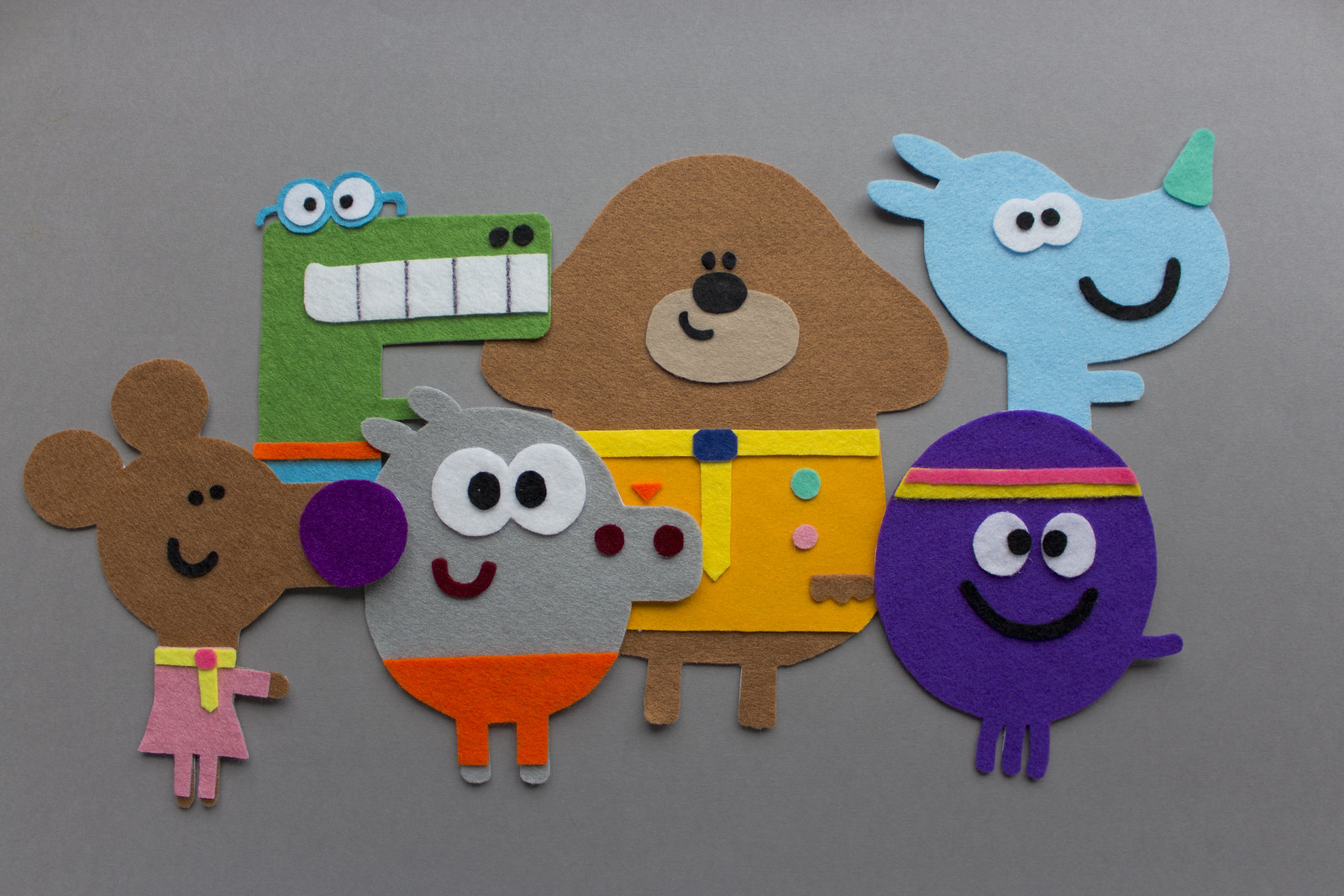 Once the characters were complete I took the decision to back them with thin card to provide a bit of extra stability, as though a lot of the craft felt I had used was quite thick and sturdy there were a few softer pieces that I used for the main bodies of Happy (the green crocodile) and Betty (the purple octopus) that meant they did not hold the same structure and had a bit too much of a drapey appearance.

The banner was completed quite simply by cutting ten swallow-tailed flag shapes from a golden yellow piece of felt and topping them with the numbers 1-10 cut from a piece of very sturdy dark blue cardstock. 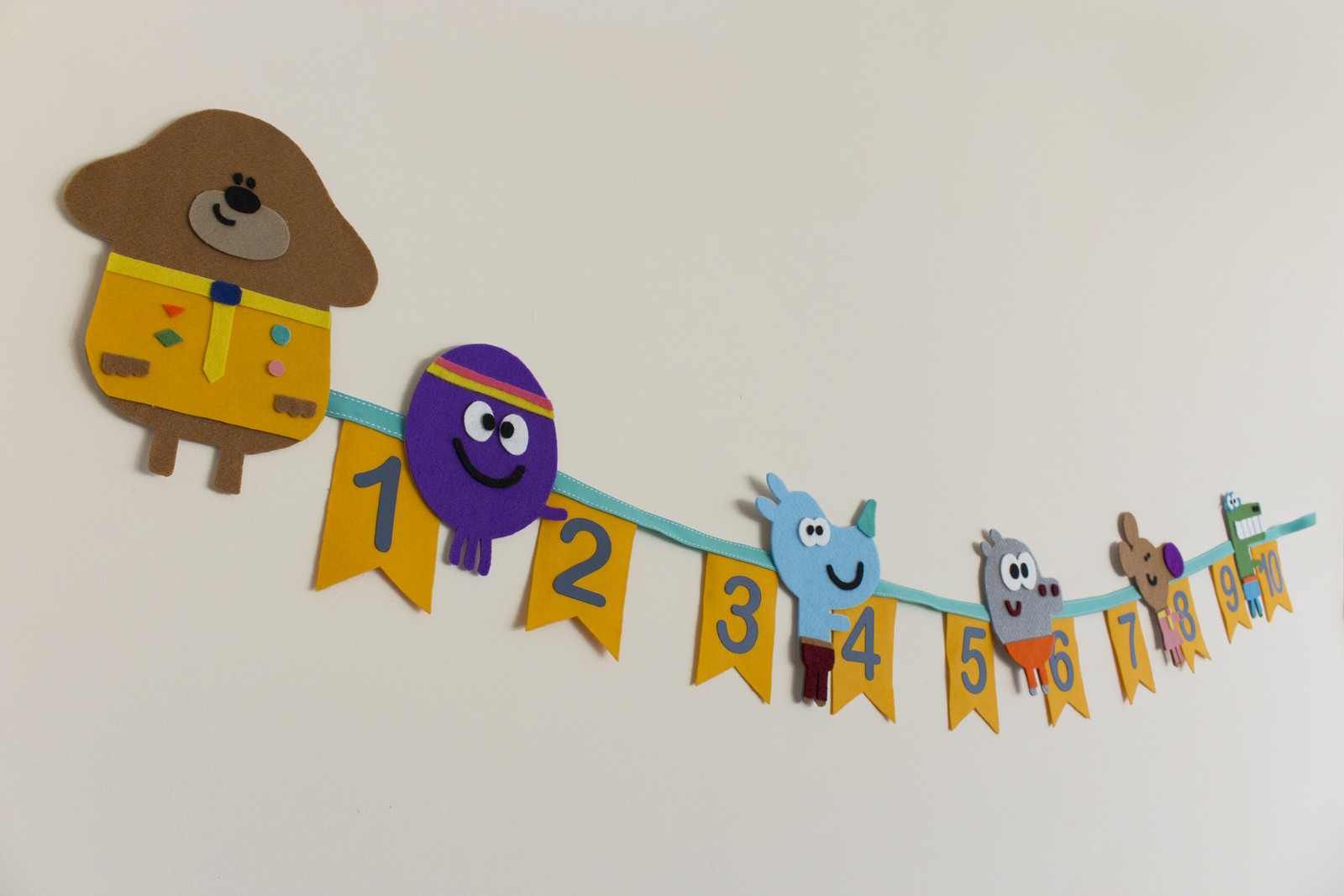 I used a length of 1.5cm wide ribbon and glued the numbered flags 7.5cm apart along the length, and glued each of the Squirrels to hold on to one each of the even numbers. Duggee himself is not joined to the banner but reposition-able so he can keep a good eye on any Squirrels that need a bit of assistance in getting their counting badges. Isn’t Duggee a good friend? A-woof!

A footnote on Betty.

We have a long-standing love and fondness for Duggee and the Squirrels at Castle Codd, and one of the Squirrels in particular: Betty, the purple octopus with five stunted legs and a headband, has made her way into a lot of our toddler crafting and family celebrations. She is Darwin’s night-time companion for cuddles and comfort, and has been on many adventures with us.

Perhaps her greatest adventure was on a trip we took to West Midlands safari park last summer. A car containing a great grandad, two parents, a one year old and a small octopus were making their way around the slightly less dangerous section of the safari park where windows could be opened and various beasts such as giraffes and zebras fed, and cars nuzzled. Darwin was so very excited to show Betty all of the giant animals that were appearing to say hello to the tiny human that he got a little over-excited and before we knew what had happened Betty had ‘jumped’ out of the window. She rolled down a small sloping hill towards some kind of animal, which nuzzled it around a bit and after deciding that Betty was not too tasty a morsel moved her off out of sight, perhaps to be investigated again later.

Darwin, by this point, was beside himself, and we were completely at a loss as to how to make things better. We couldn’t get out of the car, and we couldn’t see Betty anywhere. The sound of tears and upset grew and grew, and then my husband spotted the rangers’ van in the distance. Having seen the signs around the park to sound the horn in case of breakdown or other emergency (which this clearly was) we signalled our distress.

We were lucky and relieved when most wonderful and understanding park ranger approached and sprung into action. She requested a description of our missing companion. ‘Round, purple. Five legs. Stumpy. Big eyes… wearing a headband’. A look of confusion was fleeting on her face just as she turned off the path to begin the search in the surrounding grassland. She had certainly travelled further than we might have thought and proved difficult to find, but eventually our hero returned, carrying Betty with her. 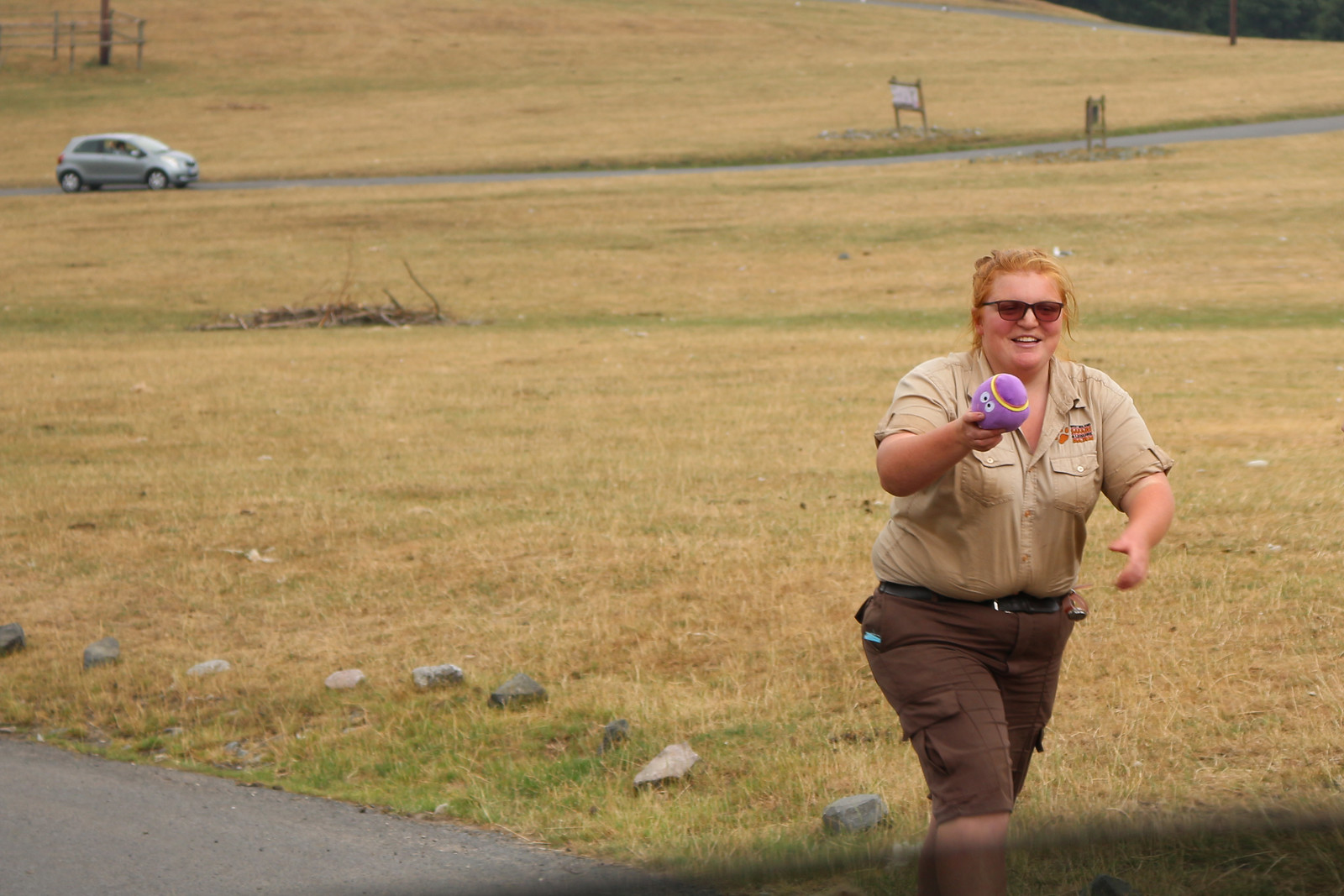 That very evening a second Betty was winging her way to us from the internet, just in case. She remains cuddled tight to our little boy’s chest every night as he sleeps.

Author: Mimi
Filed Under: Craft, embellishment, FO, papercraft
Tags: Duggee, felt, homewares, toddler
The Hurrier I Go The Behinder I Get – A Free Cross Stitch Chart To Remind You To Slow Life Down
Yellow Wagtail Scarf