I have finished plying my most recent skein of handspun. A 3-ply skein weighing 155g and 400m in length, this was my attempt at spinning something a bit heavier than my usual spinning output. Most of the general tips I have seen on spinning a heavier yarn than a spinner’s ‘natural’ spinning recommend a higher and more persistent bobbin pickup and various other wheel tweaks, and though I adjusted these upwards somewhat, I did not not make such large changes that the fibre was escaping away from me, as the aim was to attempt something a little thicker rather than a huge chunky spin, which I’d find difficult to knit with. 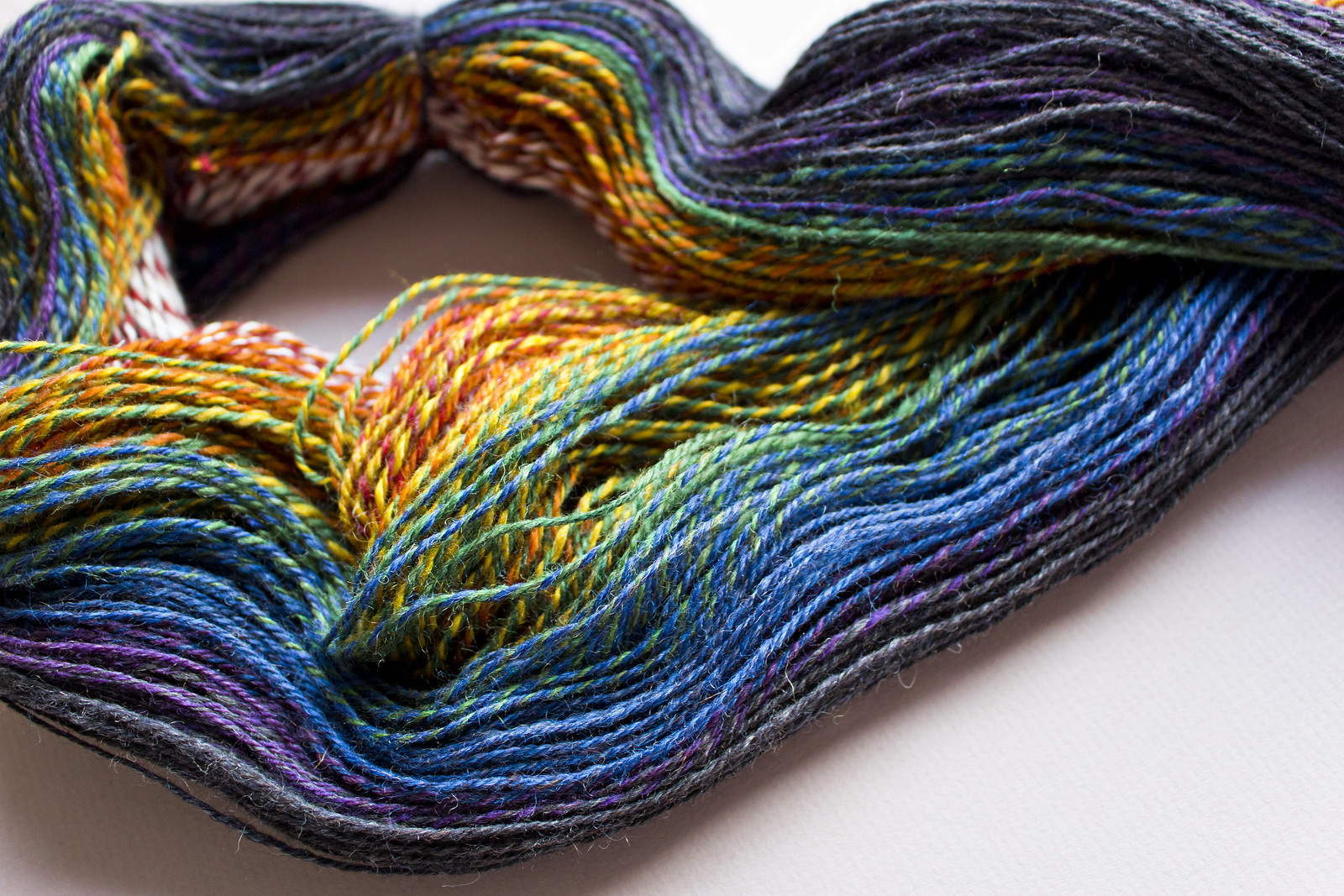 Though I think I partly managed a heavier singles, my spinning is a lot less consistent than it usually would be, and the skein is not even. For some reason I managed to draft a heavier single through the earlier colours of the skein (white, red, orange and yellow) than I did through the latter green, blue, purple and black shades. Though this is likely partly due to changes in mood and concentration, I did spin each bobbin consecutively, running through the rainbow on one bobbin before beginning bobbin two or three, so maybe it was that I had a higher degree of concentration on each ‘fresh’ bobbin, relaxing into my usual spin as the bobbin progressed and filled.

The yarn also changes texture part way through the skein. Earlier colours have more texture, with the fibres discernible; the later colours are finer, the fibres more discreet and running parallel to produce a yarn with more lustre and a far more even weight. I did find whilst spinning that some of the colours of fibre I was spinning had a slightly more ‘matted’ texture, which helped with the heavier drafting and added to the less consistent weight of the singles, whereas the darker (blue, purple and black) colours seemed far more silken in feel as the fibres were fed to the wheel. All of the fibres were from the same set, purchased packaged together, so they are of the same composition. It may be that I have done something strange when storing the fibre, as I bought it when I was pregnant so I have had it a couple of years, or maybe certain colour dyes act differently upon the fibres. Whatever it is, my skein is a bit heavier at one end than the other. 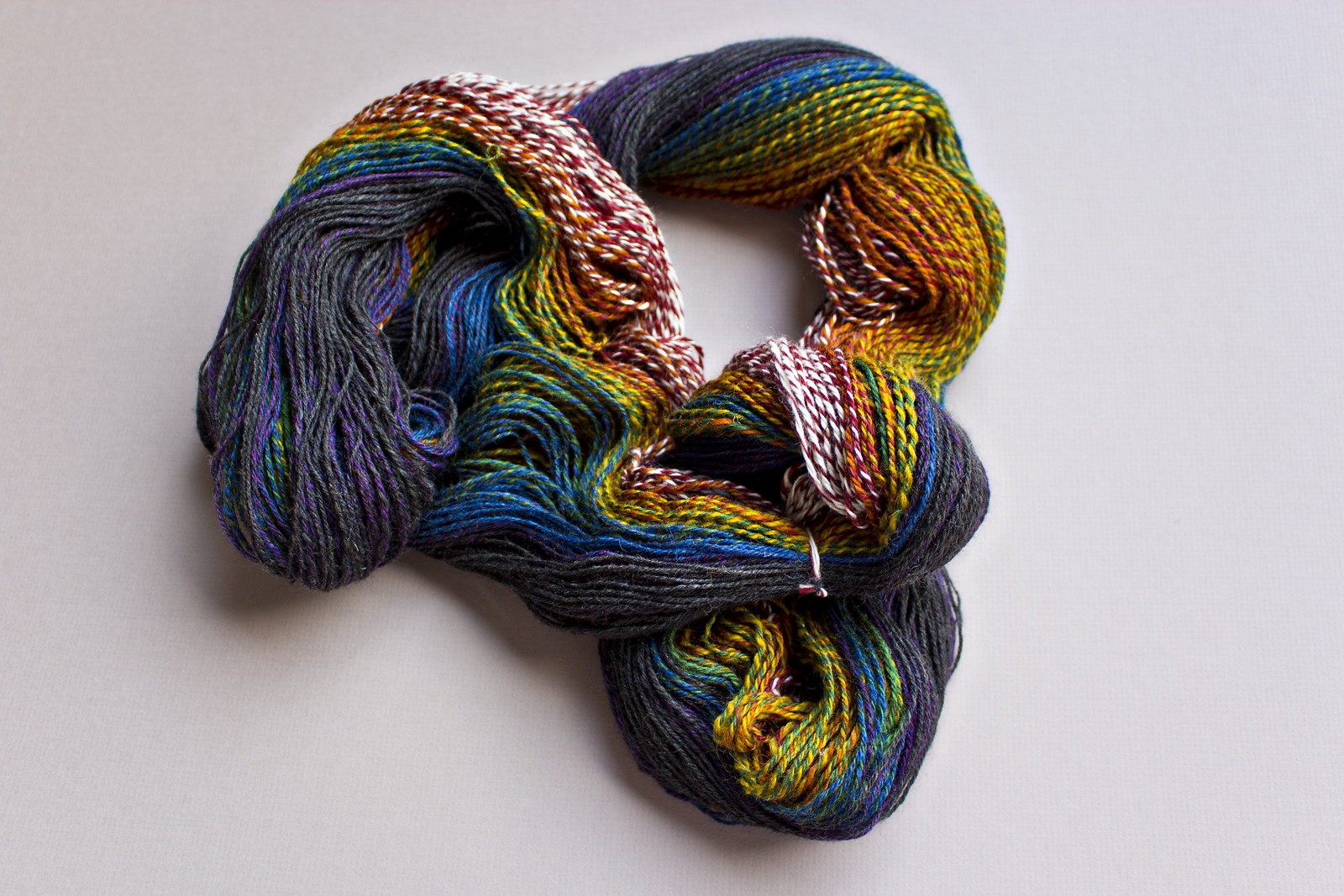 My greatest disappointment with the finished skein, though, is with my choice and handling of the colours. In the package they came in together I would describe it as a bright rainbow tempered into shade with a shot of black. Really quite beautiful. But there was also a white section. In hindsight, I should have left that out, but I didn’t think to split up he little lumps of fibre that arrived as a family, because in my mind they were a ‘set’. The black is perhaps less of an issue as I think the colours each having a hint of shade to them perhaps welcomes the black in a little more readily, but it does weight the skein to the darker side as it progresses, which I am not entirely sure was my best choice, either. The white, however, sticks out like a sore thumb to my eyes.

As well as thinking I perhaps did not make the best choice there, I also messed up the colour progression I was hoping for. I started with eight sections of fibre, each weighing 20g. I spilt each of these into a three, but I did it by eye. I didn’t weigh it, which I should have done, really.

The white and black I handled slightly differently. After splitting into three I split one of these thirds in half, and added one of these two smaller bits of fibre to one of the original thirds, giving  â…™, â…“ and ½ of the white yarn to each bobbin (and then reversing this sequence with the black. However, though I think my logic was correct, just doing this by eye, and the different weight I obtained with some of the shades of fibre resulted in a break in the sequence of yarns that should have followed the white on each bobbin. On one of the bobbins, I ran though the yellow before the yellow kicked in on the next bobbin, meaning there is one section of the finished yarn where two orange plies run alongside a green, and it just looks muddy and out of place.

I know it sounds like I dislike the yarn, but it’s more that it just doesn’t suit me, and I can’t imagine knitting with it, and I’m sort of at a loss as to what to do with it. It feels ‘wrong’ to just throw it in the bin. I have, at least taken away a few learnings from this spinning, both practical advice about my spinning and what I need to work on, and also to do with my yarn preferences and what to keep a look out for in creating a yarn I will enjoy working with. Onwards and upwards to my next spin.