After finishing Mr Awesome’s Socks a few weeks ago using Regia’s Pairfect yarn, I had written about my intention to use the same line of yarn in a non-sock project. The yarn is specifically designed for use in sock knitting, made to produce two perfectly paired socks, however I hoped to manipulate the single 100g skein to combine lengths of matching colour usually given across two socks to give longer stretches of colour over the larger circumference of (in this case) a tank top for a (very soon) one year old. 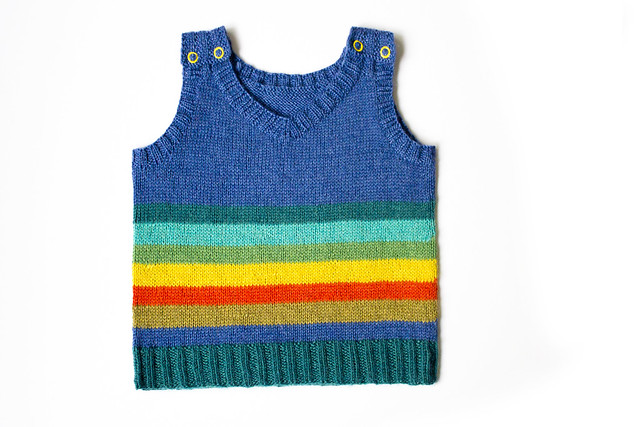 I knit this tank top freehand, working to Baby Awesome’s measurements as I went. After almost completing the project I decided that the length I had taken for the knit was perhaps a bit shorter than would have been ideal, so I adapted the bottom-up knit to lengthen the sleeve holes and shoulders, adding the press stud closures in case I needed to add further length to the sleeveless sweater.

As it happens, the length was fine, but the slightly deeper arm holes did drop the neckline to a very nice depth, so it all worked out well in the end.

When knitting the main part of the tank top I had to use two lengths of yarn to create each different coloured stripe, meaning that 18 lengths of yarn were used to knit the tank top before any edges were picked up and the ribbing knit. I decided to cheat a little and use a Russian join so that my evenings were not taken up doing nothing but weaving in ends. I like to do what I call a cheat’s Russian join, which negates the use of a darning needle (use of which is too close to weaving in ends to make much difference to me). As I had been asked about my technique for weaving in ends I posted the following quick explanation on my Instagram and Twitter account, so I have added it here for posterity: 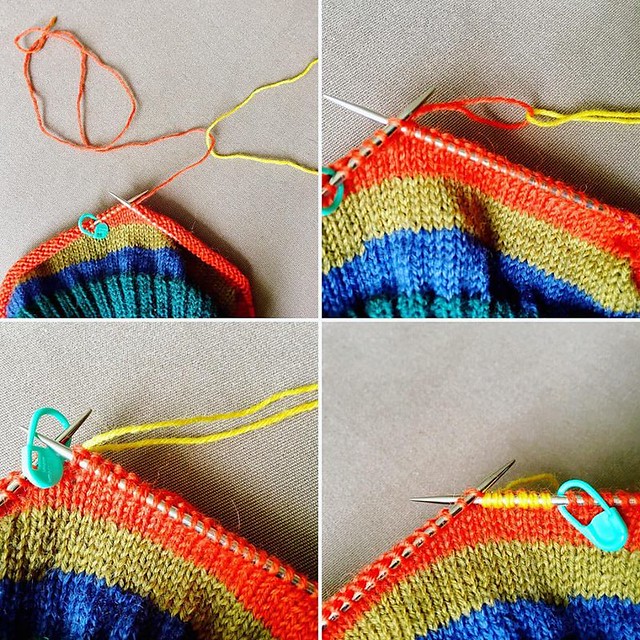 Cheat’s Russian Join:
1:  loop old and new yarns (here two colours) as if they were linking arms. If ending at a particular point work out how much yarn it will take to knit to that point and create link there (I am changing colour at the marker and know roughly how much yarn it will take me to knit the six stitches to that point. It becomes very simple to judge after you’ve done it once or twice).
2:  knit with the doubled length of your current colour, up until the link (which I’ve chosen to be six stitches, ending at the marker).
3:  Slip marker and begin with new colour/yarn, again doubled at the link point.
4:  Knit with doubled yarn for six stitches, then drop short end and continue as normal. Both ends are worked in for six stitches either side of join.

The press stud closures are the standard type found on many baby clothes, but as these can be damaging to yarn the knitting is protected at the back by a very small amount of cotton jersey fabric, trimmed tight to the closure after application.

Though it would be great at this point to share a wonderfully modelled picture of the tank top, Baby Awesome is due to turn one next week, and he is full of fun, opinions, and most importantly baby wiggles. There is no picture where he is not scooting or crawling past the camera at such speed that he is basically a rainbow blur, so the only photo I have managed to catch is by laying him down, and even then he is such a little wriggly thing that the knitting ended up all bunched behind him. You’ll just have to imagine that it is neat and not covered in porridge by this point. 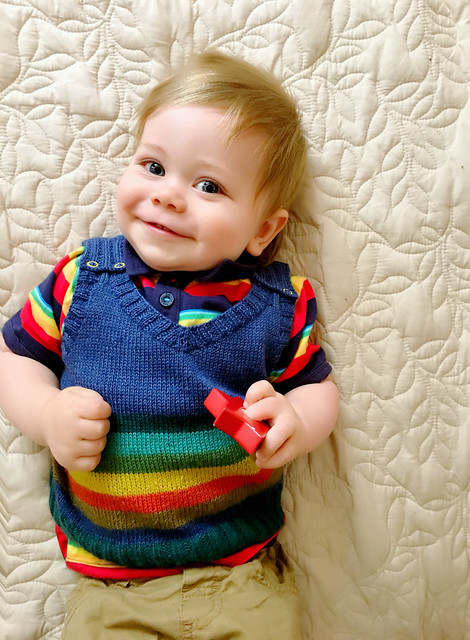 May you find happiness in your yarn. I’m off to try to finish baby Awesome’s next knitted gift, as I’d like to have it ready for his first birthday next week!