Socks With Stripes, And Why You Shouldn’t Take That Tone 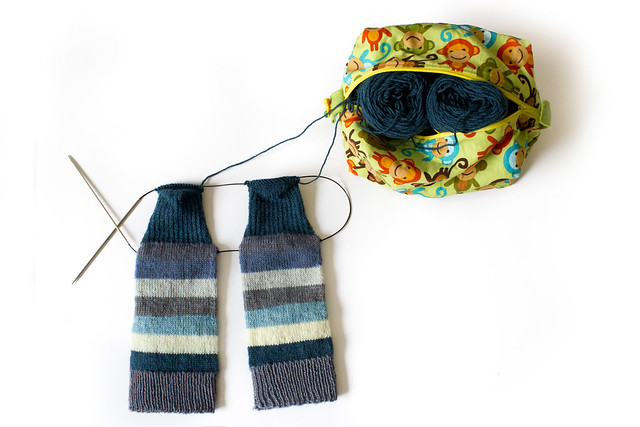 Mr Awesome’s socks are coming along in short spurts between feeds and changes, and the occasional long walk to town. The cuff and seven stripes for the legs have been knit, and the final dark teal colour has been reached, signalling the end of the leg. The heel has been knit in a slip stitch pattern and I have turned the heel on each sock. I have decided to use a flap and gusset heel for these socks, though I have never settled on a favourite heel – I tend to flit between these and a short row heel dependant on the yarn I am using, but as the foot portion of these socks is to be knit entirely in a solid colour there is no reason to favour one over the other. If the foot of the yarn had continued in a striping sequence then I would always choose to use a short row heel, placed as an afterthought heel or knit in situ with co-ordinating yarn, to preserve the steady stripe sequence. 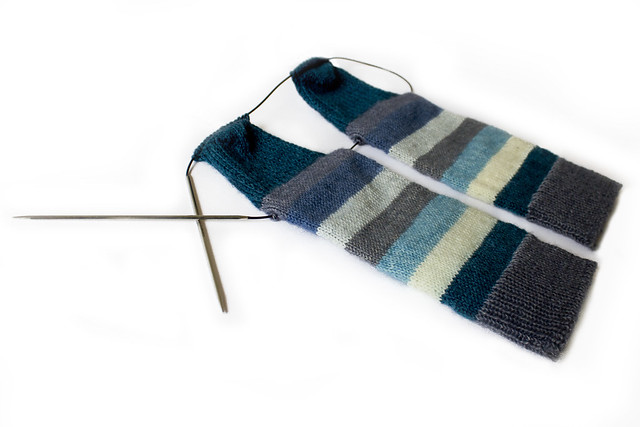 There is only one element of these socks that I am slightly disappointed with, and that’s a couple of the colour transitions, especially that between the sixth and seventh stripes. The sixth stripe is a mid blue, and the seventh a mid grey, but they are extremely similar in depth of tone, so at first glance the two stripes are confused into one wider stripe. The effect can easily be seen when the image is given in greyscale. 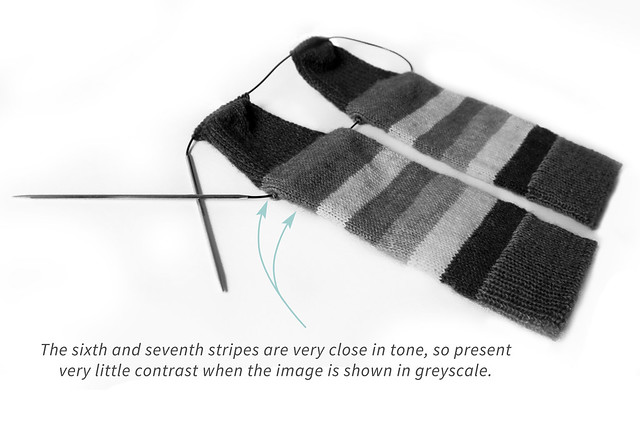 There is a decent amount of tonal contrast between all of the other adjacent stripes in the socks, so this area seems out of keeping with the other areas of the yarn design. If the whole sock had been tonally steady (such as all pastel shades) then the yarn would seem far more harmonious, but it is only between these two stripes that the colours are tonally close.

Distinct tonal differences between adjacent shades is a principle element of a lot of colourwork, especially when working motifs against a range of background shades in stranded colourwork: if dominant and background colours are too close tonally, the motifs may be lost, or visually displeasing, and so should be kept distinct. I try to stick to this basic principle when choosing yarn for projects where distinct motifs are important to the design such as in the Star Stocking. 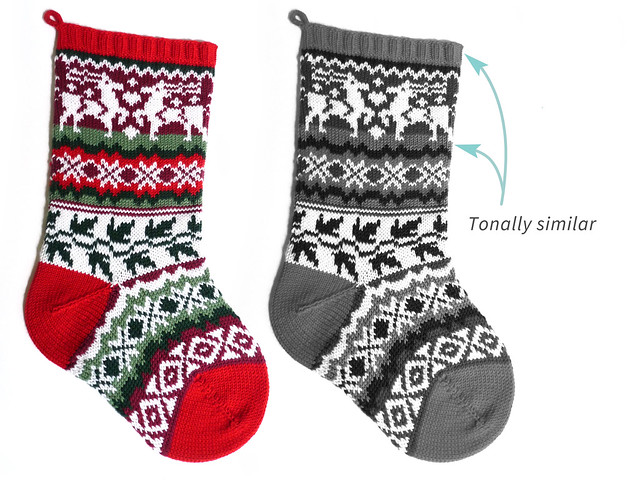 When choosing yarns for this design, two of the colours chosen were almost identical in tonal value: the lighter green and bright red. However, this was taken into account in the design and if the image is viewed in colour it can be seen that these two colour choices are never placed adjacent. In fact, when viewed in greyscale the entire patterning of the stocking is clearly discernible.

A great tip when choosing yarns for a colourwork pattern in a yarn shop is to snap a picture on your mobile phone and use an app to change the picture to greyscale: you should be able to see clear definition between any shades that are to be placed adjacent, especially in the case of a foreground and background colour.

Though there are no intricate patterns to get ‘lost’ in the stripes of the socks, I would personally have preferred that the sixth and seventh stripes of the yarn had been in greater contrast, the simplicity and joy of the simplest form of knitting has also been greatly relaxing: there is no pattern to get lost in or to concentrate on, so I can chuck the socks aside between stitches when a wavering little cry is given, or a coo to signify it is time to wake up and play, so sooner or later, on a timescale decided by both Awesome Baby and I, Mr Awesome will soon have a new, rather wonderful, pair of socks.

2 thoughts on “Socks With Stripes, And Why You Shouldn’t Take That Tone”