A few weeks ago I posted about the first baby knit that I made once I was feeling up to knitting, after the more miserable effects of my pregnancy had eased and I had started feeling up to just a few slow stitches here and there.

Today, however, I remembered that the little yellow kimono was in fact not the first baby knit that I embarked upon, though it was the first that I finished. In fact, the first baby knit (for my own baby) that I started is still not finished, and I doubt ever will be. It is my very own Fail Whale. 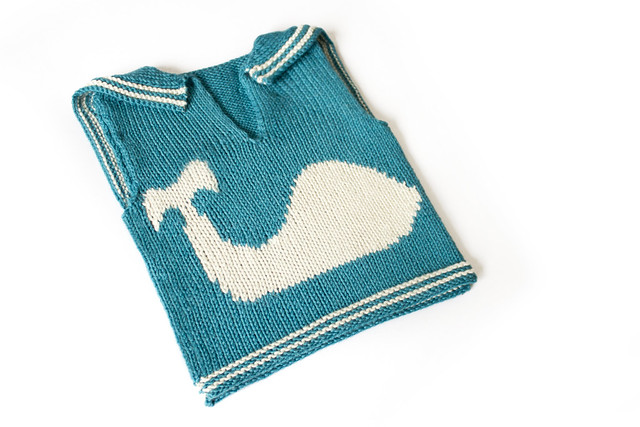 After the confidence that the first scan gave us, I decided to let myself dream a little of the future, and imagine ourselves with a little baby, wrapped in precious handmade things, and in my head I envisioned a bright nursery with white and neutral brown and beige tones and a feel of the seaside, filled with whales, lighthouses, light and navy blues, driftwood and the sea-air lightened shades of summer. So, when I went looking for the first baby knit pattern I chanced upon what I thought was the perfect pattern: a little sailor-style sweater with a whale on it. We were months off of knowing whether to expect a girl or boy, but I thought that this cute little knit would suit both equally. 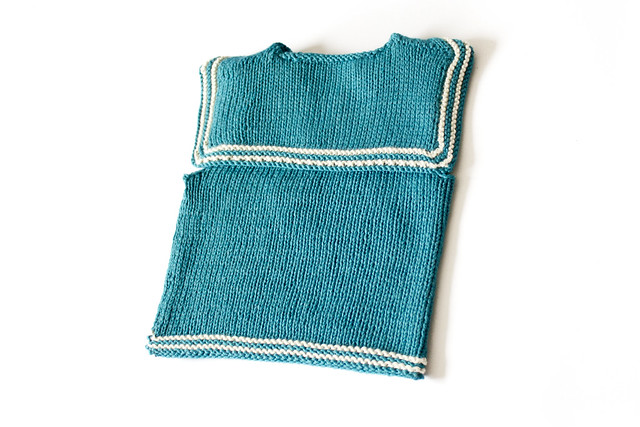 I liked the look of the somewhat oversized sailor collar, and so decided to pick up the $7.50 pattern as my knitting needles were twitching.

Sadly, I don’t think I will ever finish this pattern because of the frustrations it brought me. I know I should have read the Ravelry comments first, but I was away from home and on my iPhone and (excuses). Chief concern among many of the other completed projects on Ravelry is that this sweater does not successfully fit over a baby’s head. I ended up going back and fudging this a little by inserting a vertical neck opening to increase the space for baby’s head to go through, but in the original pattern the neck is continuous and joined across the collar: If you imagine sewing up the vertical neck opening and the space this leaves, it is not baby-head friendly.

I was going to edge the neckline I had created with either some applied i-Cord or a few rows of picked-up rib or garter, and then brace it with a little button-able tab, in keeping with the sailor style. I think this would have worked out, but I had other problems with the pattern, too.

I can see that all of the other projects on Ravelry have used the original intarsia chart for the sweater (the pattern comes with two: one for a sailing boat and the other for the whale, above), and I think if I hadn’t so much have wanted to use the whale chart I would have fared better, as then it might actually have worked, but as it was the chart just did not fit on the sweater.

I have been in touch with the designer who has twice said that it is my gauge (specifically row gauge) that is the issue, but it’s not. I am on gauge and actually it is the maths in the pattern.

The pattern gives a row gauge of 24 rows per 4″/10cm (so six rows per inch). The pattern gives to knit 5 rows of garter stitch (which is about ½”) then you are to knit 1″ of stockinette for the newborn size (so, keep track here: 1½” so far). The whale motif is 39 rows high, which at 6 rows per inch works out to 6½”, added to the initial 1½” gives 8 inches total by the time that the last row of the whale intarsia is knit. However, the pattern gives instruction to start the bind-off for armhole shaping for the newborn size after 6″ from the cast-on edge: 2 inches before, (using the pattern’s gauge), the chart would be finished. If using the sailing boat chart this would likely not present a problem, as the tapering triangle formed by the sails would bring the motif in at the sides enough to avoid the decreases formed by the armhole shaping. However, the motif of the whale runs right up to the top-left corner of the chart, and the newborn sweater makes use of the entire width of the chart up to the seaming line, so you’s have to sacrifice half of the whale’s tail.

I did contact the designer with the issues in the chart, but was told that it was my gauge at fault. I did email back with the maths of the pattern in the given gauge of the pattern, but was told it was my gauge and that many people had issues with achieving the gauge (I did not), so kind of gave up and decided to just improvise around the armholes as best as I could. But, by now, I was kind of fed up of the whole project. I like adapting and modifying things to suit a particular idea or preference of mine, but having to do so to be able to allow a sweater to go over an infant head or actually fit the chart in the given space was just fixing problems rather than putting a stamp of preference on.

When I ran through the gauge maths again the sleeves seemed to be a bit out of proportion. It really wouldn’t have been a big job to have just re-jigged the maths on the sleeves, but I was kind of fed up of the whole thing by this point, and then I didn’t like the way the collar was worked and sat on the shoulder at the neck edge, and then felt disheartened and put it aside until finding it today. 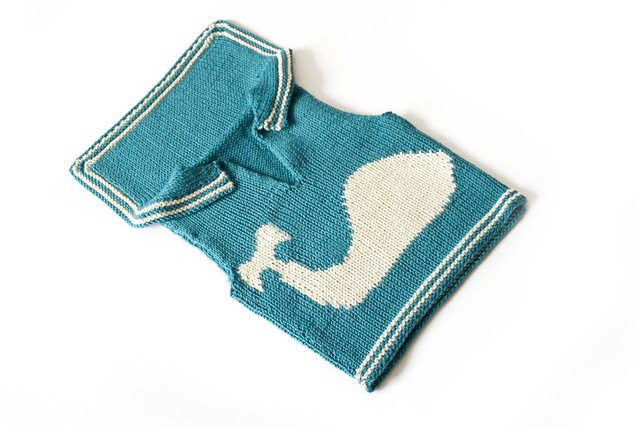 I could edge the sleeves and neckline and salvage at least a little sleeveless sweater from this project, but I don’t know if I have either the heart nor energy to give it any more of my time. It was the project that I’d hoped would bring me through the health problems that had plagued me through much of the pregnancy, but in reality I didn’t start the next project until a long time after casting this aside. Maybe if I find where I have put the cream yarn I was using for the motif and details I will edge the sleeve and neckline to see how it looks, or maybe I will just chuck it back where it was and concentrate on new knits.

16 thoughts on “The Little Whale That Would Only Fail”