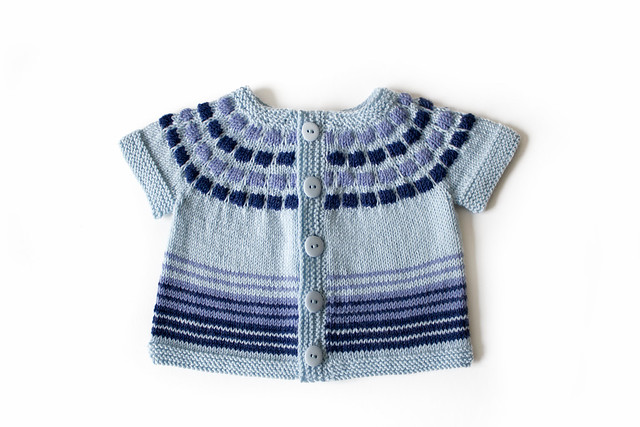 Over the weekend I decided to knit a little cardigan with the remnants of three shades of Drops Baby Merino in Ice Blue, Lavender and Navy using the Little Bubbles pattern. As it was knitted with the three yarns left over from completing the Snuggly Bums Trousers, Perfect Stripes Cardigan and Bumpy Baby Jumper I came to think of it rather  like the dish Bubble & Squeak: made from leftovers. 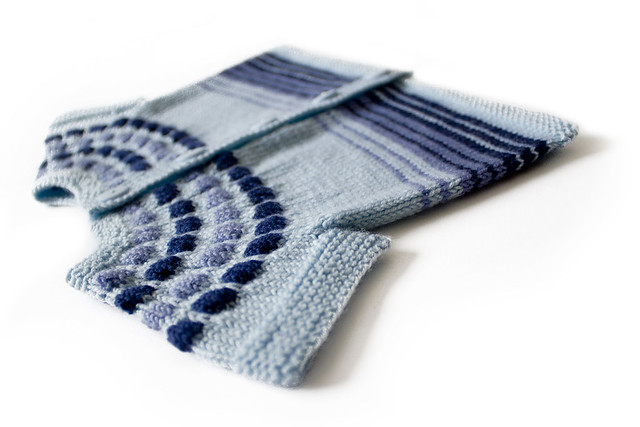 The pattern is simply written, with the exception of the stitch pattern used for the ‘bubbles’ section around the neckline, which is perhaps a little clumsily described. A stitch in one of the contrasting shades of blue (in this case the Lavender and Navy blues) is dropped down four rows to the first stitch of the background colour (Ice Blue). The left needle can then be inserted through this stitch and underneath the resulting strands of the drops contrast stitches, and the stitch knit as usual, which feels as if you are knitting the whole lot together. This bundles together all of the background strands to draw them together and upwards at the rear of the work, preventing any loose stranding that could catch around small baby fingers and also improving the appearance of the stitch. 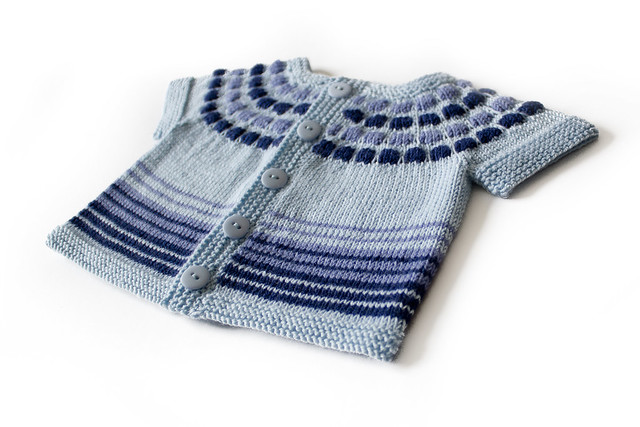 I knit the cardigan with several modifications, including reducing the number of colours used from five to just three, to make use of the yarn that I already had.

The original version had very wide sleeves which looked disproportionate to the body of the cardigan, so I made an alteration to the numbers used when dividing the count of stitches between the body and the sleeves. Having knit the smallest size, I gave 33sts  to each of the cardigan fronts (instead of 31), 36sts were put aside for each sleeve (instead of 40) cast on 4 for the underarms (instead of 8) and gave 65 to the back of the cardigan (instead of 61). This resulted in the body having the same stitch count as per the original, due to the reduced number of stitches cast on for the underarms, but the arms carrying 8 fewer stitches once both underarm and initial sleeve numbers were taken into account.

I also shortened the sleeves from their original full length so that I had a few different sleeve options available to the baby to account for weather and situation when the baby is born. I did this by knitting three rounds of the background colour and 10 rounds of garter stitch (beginning with a purl round) before binding off in purl. 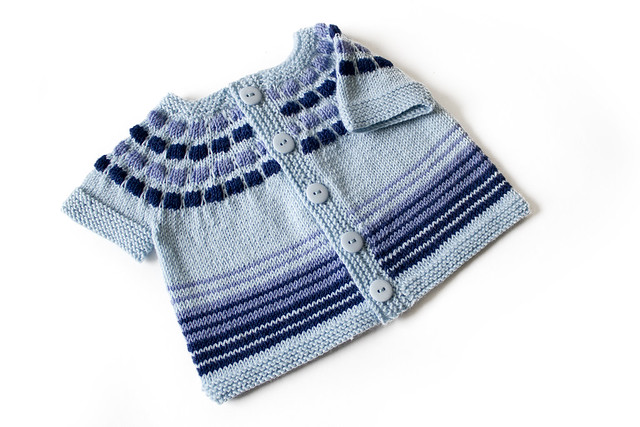 I also increased the stitch count of the picked up button bands to 58sts and gave five equally spaced buttonholes instead of the four in the pattern which left a large un-buttoned section at the bottom of the band, spaced as so:
K4, *3st buttonhole, K8; Repeat from * three more times, 3st buttonhole, K5. I knit the buttonholes with a contrast placeholder yarn and overcast these to finish them once the cardigan was knit, but in hindsight it was a lot of work for not a lot of effect. Though the resulting buttonholes do feel nice and stable, it would perhaps be only a technique I used for a fine-finished garment, rather than a baby knit, and would next time just cast them off one row and back on the next row, for speed and simplicity..

The only other modification I made was to change the striping sequence from the one given in the pattern. The original consists of 24 rows (in the smallest size) of single-row stripes. In the areas where the yarns used have a noticeable contrast I thought it looked quite optically challenging, so found a slightly more harmonious (to my own aesthetics) striping sequence using the three restricted palette of three shades instead of the five prescribed shades given in the pattern. 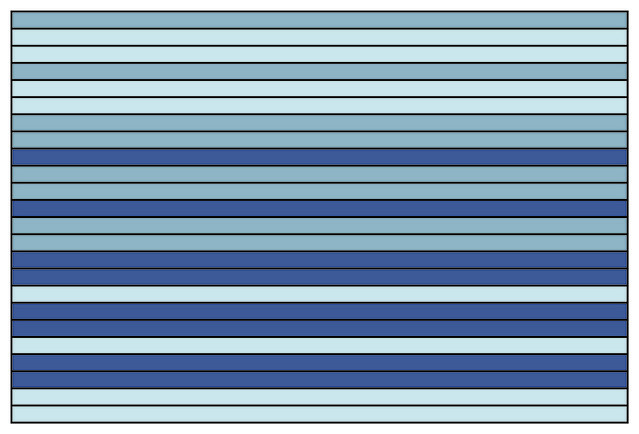 The finished cardigan is simple, but cute and was a relatively quick knit. If I were to knit it again the only further modification I would make would be to perhaps drop down a needle size of the ‘Bubbles’ rows just to neaten those up a tad more as they have lost a little of their form once the merino wool received its bath and relaxed a little.

Author: Mimi
Filed Under: baby, Craft, knitting
Tags: cardigan, garment, stripes
The Little Whale That Would Only Fail
Polaroid – Pictures Back in Time