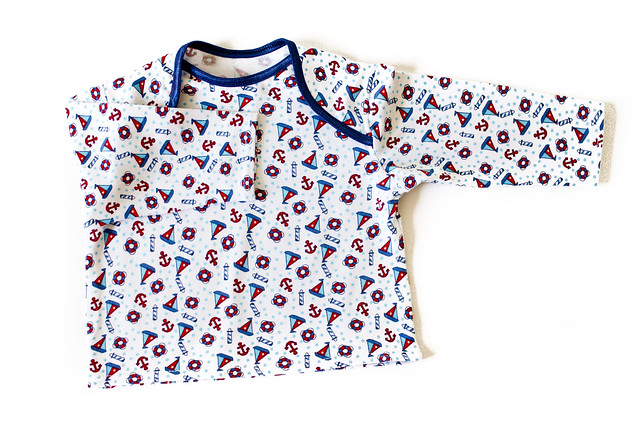 For our first anniversary a couple of weeks ago, Mr Awesome presented me with a box, the contents of which clearly not made of anything in the theme of ‘paper’. It was heavy, and lay upon my legs like a big cube of exciting possibilities.

As I opened it, it was clear that I married the right man – not because it was something big and expensive, but because he had clearly listened to me and knew that I had been thinking about a purchase for many, many months but cost and other factors had just knocked me back. I mean, it was big and expensive, but that wasn’t the point.

What he had bought me was an overlocker. And then a new world of possibilities opened for me. The very next time I was able, I passed by the fabric store and picked up some lovely soft jersey. They had many solid shade, and one patterned bolt, which was covered in sail boats, light houses and life buoys. As it happens, this fit perfectly with our nursery theme of the seaside and lighthouses, whales and narwhals. 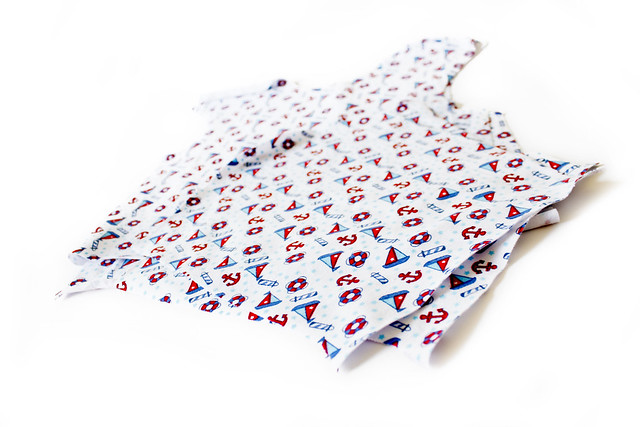 I decided to start with something simple and after a lengthy internet search decided upon one of the small baby garments from the Butterick 5585 pattern set, settling on a long sleeved t-shirt. 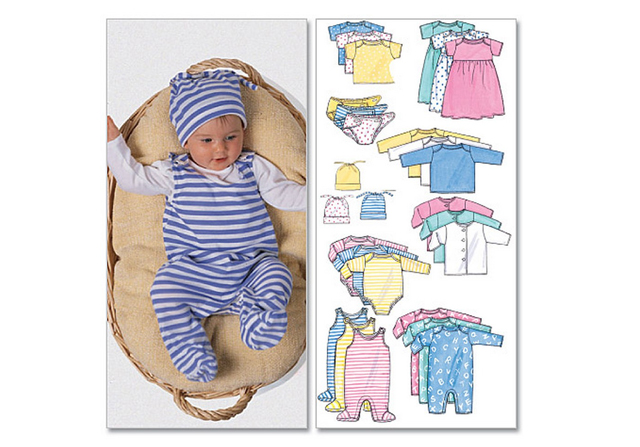 With pattern and cut fabric at hand I readied myself with the instructions, but came up a little short. Many of the patterns in the Butterick 5585 set use Bias binding along the inside of the edgings for neck, sleeves and legs, sometimes then threaded with elastic for shaping into the resulting channel, which seemed to me to be a little harsh and uncomfortable for such delicate skin. Now, I know that you can get jersey tape, as I have seen it somewhere, but goodness me it seemed almost impossible to track down. After a dishearteningly lengthy internet search I decided that a plan B was probably in order, and soon hit upon the notion of fold over elastic.

Fold over elastic is a product that the internet would have you believe has three uses: Baby headbands, hair ties and friendship bracelets. It is a soft elastic in many colours and designs, with a channel or groove running down the length of the centre, that allows you to fold it in half, like an elastic binding, which is exactly what I wanted for and (I assume) the original purpose.

Once I had this in hand (thanks to the powers of eBay) the shirt took me less than an hour to put together, even with a few setbacks. The resulting shirt is not perfect, but it’s also not awful for a first time with a lot of new techniques, equipment and materials. 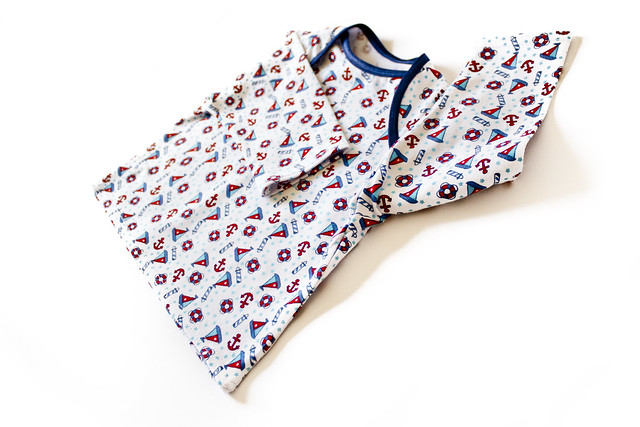 The neck is nice and elastic, but soft. I’m not too pleased with the shape of the neck and would drop it by about 1 or 1.5cm all around if I made either this or another pattern from the set again (which I do think that I will) as the envelope just seems a little too deep and I’d like a slightly wider resulting neckline. 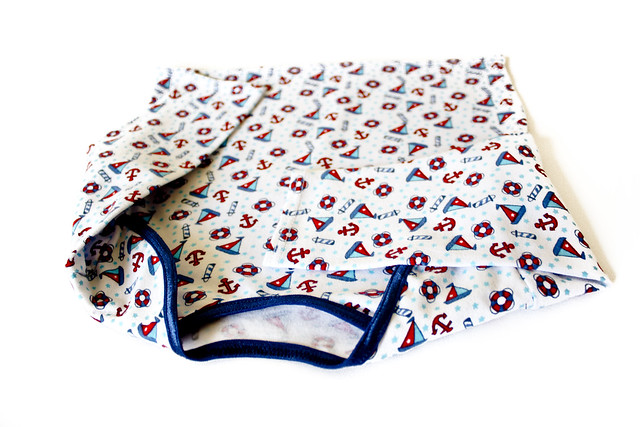 I attached the fold over elastic using a double needle on the regular sewing machine to retain all possible stretch. Most internet tutorials recommend a 3-step or regular wide long zig-zag stitch when using the elastic as an edging, but I didn’t like the finish on this, and the double stitches edge both looks and feels nicer to me.

Manipulating the edging along such a small series of curves was quite challenging, and I found after my first attempt that I needed to stretch the elastic slightly when attaching to get the neck to lay flat. Many sites I read said that the elastic needed to be pinned or basted to the fabric before being sewn, however I found this gave a very fluted edge – in the end I manipulated the elastic over the edge bit by bit as I ran it through the machine, maybe giving a 15% stretch as I sewed it on to encompass the edge, and this gave me a much better result which lays very nicely.

I finished the cuff and hem with the double needle before basting the envelope neck overlap into place to attach the sleeves. The sleeves were attached before the pieces of the   front and back were attached to make it easier to fit the small sleeve caps into place. As the finished t-shirt features an envelope neckline there is also no shoulder seam, as this is provided by the overlap of the two fabrics. 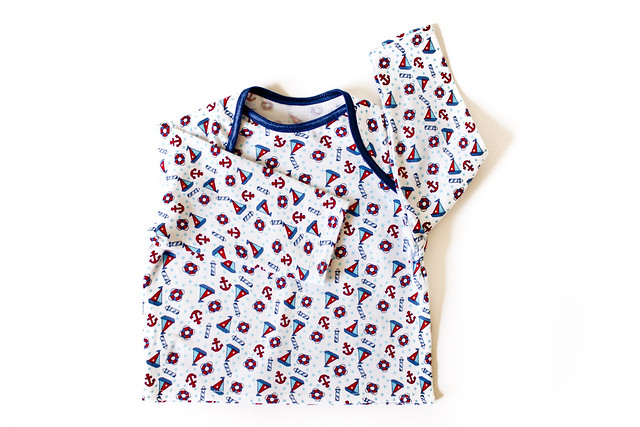 The sleeves were then fitted in using the overlocker. In case you are not sure, overlockers (or sergers, if you will) are awesome. They are also really, really terrifying. Not from a mechanical point of view, just from the idea that if you don’t guide something just right you might just cut through all of your work, or sew the seam too wide to result in a too-small finished project. I need more practice on this, as after finishing the long seams down the sleeves and sides, I think the finished top looks a little too wide. Comparing the finished piece with some shop-bought style, it does look a bit too wide. If I am feeling enthusiastic later on I may cut these seams out and sew them a bit narrower: The pattern called for a 1.5cm seam allowance, and I found this difficult to manage and just naturally stitched them narrower, but for a first attempt I am not going to worry myself too much. I shall call it practice, and still have the best part of a metre of fabric left.

Overall, I am pleased with the little shirt for a first attempt – a bit more practice with the overlocker and hopefully i will have a few more sewn baby clothes to look forwards to making.

5 thoughts on “FO: Sail Away Shirt”