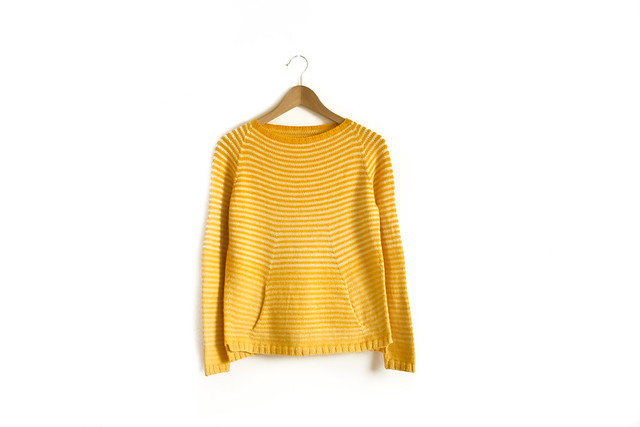 The yellow striped sweater with kangaroo pocket is complete and off the needles. Isn’t she pretty? The majority of this sunshine-y wonder was knit, if you remember, by Jen of JenACKnitwear. I can take no credit for anything other than a sleeve and a half. I knit the remaining sweater over a day and a bit, between dozing spells, and it was as gentle and relaxing as sleeve knitting should be. 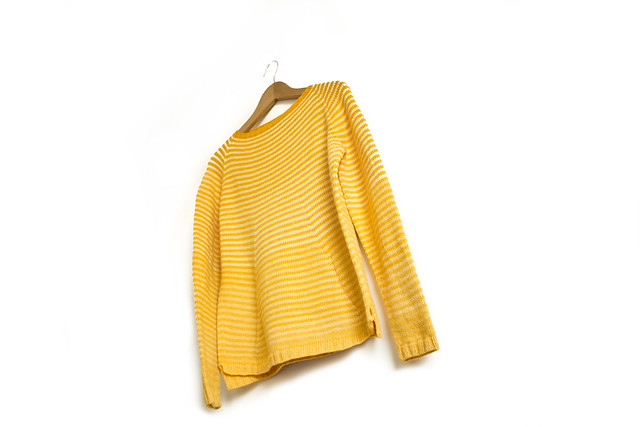 Where I struggled a little was when it came to blocking the sweater. I didn’t feel like I had the energy to actually go through the washing, removing of water, towels, pinning, shaping  and care that it needed. Most of these steps involved bending down, or putting my head down in some way, and this is one of the circumstances in which I have been finding myself light-headed and faint (and I did faint again on Sunday and have injured my face/head somewhat – which is one of the reasons that I probably wont have any pictures of me wearing the sweater for a couple of weeks at least, but I will share them when I do!).

I think I finally got the sweater blocked last Thursday or Friday, and it was worth the effort. The yarn has bloomed ever so slightly, and the plump, uniform stitches are soft and gorgeous. The sweater is knit in no less than six different graded shades of yellow yarn, starting at the top with the most extreme pairing of dark and light and ending at the bottom with the two middling shades. It took a while to figure out the stripe placement and where each colour changed to match the sleeves to the body, but through careful squinting, judgement and counting of rows between Jen’s deftly woven in ends, I think I have it right, and nobody will study the stripes as much as I have done, anyway.

I think my favourite thing about the sweater is when I wear it out it will always warm me not only with its soft and comforting fibres but also with the friendship and care that this was given to me. I think Jen knows how much this has meant to me – I hope so anyway. 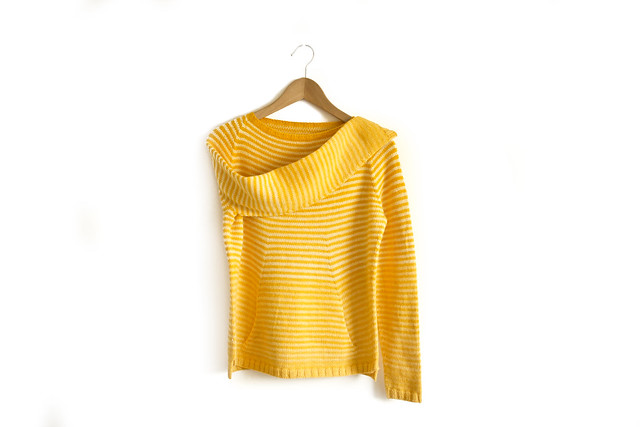 The good news is that I feel a bit more confident and happy in things now. It’s still difficult not being able to get out and about. The only place I visit is the doctors, and that’s not exactly a bundle of laughs, so it feels quite isolated being stuck in bed, sometimes worried to move too much as I’ve been weak and dizzy, which brings around nausea and feeling faint. Plus I know I have to look after myself as I gave Mr Awesome a bit of a scare when I passed out the other night (and on his birthday, no less, the entirety of which he spent caring for me, rather than the other way around). So it’s lonely, but at least I now can click my needles together between naps.

I’ve got a few ideas in my head at the moment, but I think that all and any ideas will take a while to find fruition at the moment, but with hope anyone who is patient enough to stick with the blog’s current intermittentness will see some bright and cheery things soon.

10 thoughts on “Shades Of Sunshine Sweater”