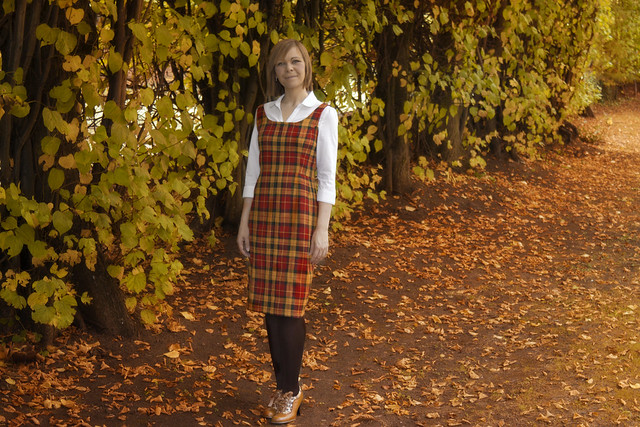 O hushed October morning mild,
Thy leaves have ripened to the fall;
Tomorrow’s wind, if it be wild,
Should waste them all.

October has brought with it the falling leaves, and soon my gold and russet backdrop will make way for bare branches and the less pretty world of traffic and the pavement grey beyond, so I thought I should catch up some of the colours of autumn and make myself a dress appropriate for the season.

I choose a wool mix fabric: a richly coloured tartan weave that I found among the bolts of fabric at my local fabric store. The first time I saw it I took home the impression that it had a heavy leaning towards yellow in the mix. I had thought to make a dress reminiscent of Rupert The Bear’s trousers, and to wear it with a little red sweater underneath, or a red cardigan to complete the look, but my memory had betrayed me and the actual fabric was far more weighted towards the red, but I had already decided on the project so it came home with me. 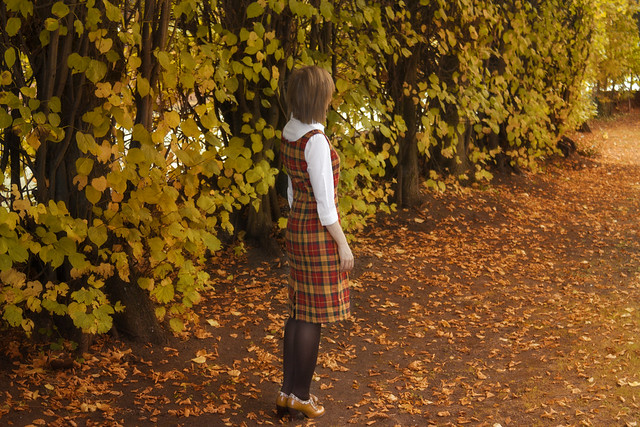 The top half of the dress is cut from the same pattern pieces as the Beaded Lace Collar Dress, namely NewLook Dress pattern 6457. I enjoyed the fit of the first dress I had made from this design, so decided to keep the fit for the top portion of this outfit. The lower half is made using the Pencil Skirt Pattern from the second Great British Sewing Bee book.

Well, it’s kind of made from that pattern because I made perhaps the most silly mistake I can imagine making when putting this dress together. I have sewn pieces inside out loads of times. I ended up with two left-facing back pieces on my beaded lace collar dress before I fixed that mistake, but nothing quite matches what I managed with this dress. I’m not sure if you can tell from the pictures, but it was enough to make me almost throw the whole project in the bin at one point. 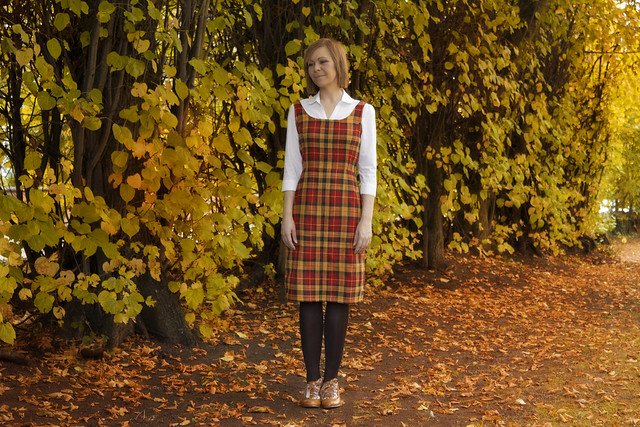 The bottom hem of the skirt is actually the intended waist-line. The part at the waist with the added darts? Yes, that was supposed to be the bottom of the skirt: the whole skirt section of the dress is upside down. How did I manage that? I have literally no clue. I would have unpicked it and reattached it but for two things: firstly, the weave of this wool mix fabric is relatively loose, and I thought where I had put the darts near what would then be the hem would actually show as distortions in the fabric. I just had the impression that it would never sit quite right. Secondly, I had finished and trimmed all of my seams, to a fine degree, and though losing a couple of centimetres off the skirt would hardly have signified the demise of polite society it would also have meant raising the waistline join up by another inch or so, which would have made the fit unflattering and the hip line of the skirt would not have sat on the hips, providing extra unwanted fabric around the middle.

I was so fed up at this point that I narrowed the hem-line slightly to make room for the kick pleat, chopped it about here and there and hemmed the skirt hoping for the best.

I am lucky that I followed best practice and cut the pieces down not just a strong vertical line but one that provided a point of symmetry, as it allowed me to line the vertical tartan pieces up despite my error, which I think has disguised the problem somewhat.

I’m no longer sure if I am annoyed with this dress or amused, but I was determined to wear it anyway, so I put it on as soon as it had its final press and sauntered out the door to do some shopping. Whilst I was out I was walking down a residential street when a woman of around 50 years age who I had never met or seen before called out from where she was tending her garden ‘what are you? A Scotty?’ and then started waving her arms around like a lunatic whilst badly singing and acting out the Highland Fling. I smiled weakly, though in my head were quite withering thoughts. She then shouted the same question to me and continued her crazed dance as I muttered a quiet ‘no’ and wandered off with a shake of the head. I’m kind of annoyed at this woman, who no doubt thought she was hilarious, because I do have some confidence issues and having strangers heckling my clothes in the street doesn’t do much to bolster me in my confidence, but I am going to try to put that episode behind me and will try to make sure that I wear this dress a few times over the coming weeks to enjoy my upside-down dress for Autumn.