Yarn Is A Cheerier Thing

Thank you for all of the words of support and understanding yesterday. I thought I’d probably feel a little less disappointed today after it had sunk in and hopefully after hearing back from the publishers, but whilst I still await a reply to the email I sent yesterday I am more stuck in limbo. I thought I would have a look through some of my purchases from the weekend to try and cheer myself up. 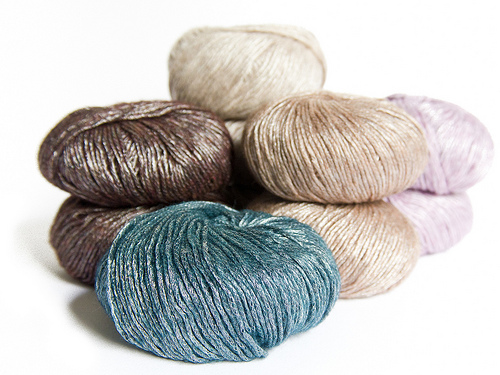 I bought this yarn in a grab bag for £4, unlabelled with any details of fibre content or brand, but I know that I have seen it somewhere before, in either a yarn or department store. It’s balled in 50g skeins and appears to be a heavyish aran weight. I asked the folks on the British Knitters board on Ravelry if anyone recognised my mystery purchase and had a few likely suggestions, the most accurate of which I think might be Lana Grossa Luxor Aran. Amusingly, I was leafing through a magazine yesterday and noticed another likely candidate: Rico Fashion MÃ¨talisÃ¨, which has the same fibre content, appearance, skein size and meterage as the Lana Grossa yarn, perhaps from the same mill, rebranded at some point.

I am not yet sure what I shall do with this yarn. Considering it is a grab bag that works out to 40p a ball (under that, in fact, as there were other balls of yarn included) the colours do not look too bad together. I might make myself a winter tank top, but whatever I knit I foresee plenty of stripes.

6 thoughts on “Yarn Is A Cheerier Thing”