Forgotten Knits And The Sock Walk Of Shame

A few days ago I discovered the following exhibit in my sock drawer. 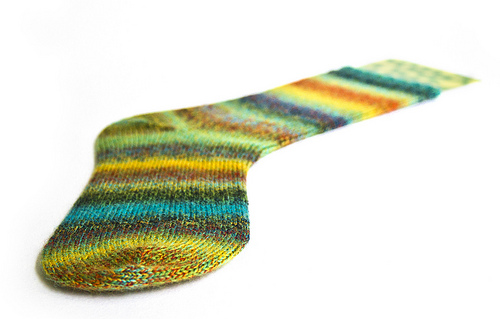 It is a single sock of the stockinette variety, knit in multicoloured yarn. I can tell that I must have knit this sock as it exhibits the sock cuff that I used to begin all of my socks with before discovering this wonderful cast on. It is also the perfect fit for my foot and knit in super-duper yarn. I can tell it is my creation, yet I have no memory whatsoever of knitting this sock.

I looked on Ravelry, through pictures on my hard drive and then checked through the pictures on my phone, but there seemed to be no record of this piece of knitting, and it did not have a mate. A single, lonely sock. I recognised the yarn – similar in colour scheme to Schoppel Woole Zauberball Crazy Frische Fische, I could see that up close the yarn was standard 4-ply construction, with each ply it’s own graduating colour, which makes it Schoppel Woole’s Admiral Ombre line, also in Frische Fische (as an aside, this is a fantastic hardworking standard 4-ply wool/25% nylon construction sock yarn alternative to the Zauberball in some colour ways). I know that I owned some of this yarn as I could a picture of the skein on my Flickr account. 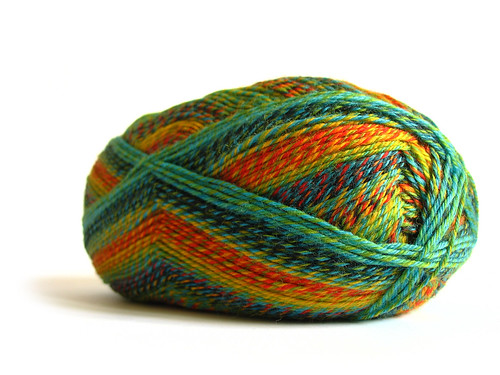 And then, by chance, I was looking through some old Instagram pictures yesterday and found some shots of this sock on the needles, uploaded 62 weeks ago, interspersed with holiday pictures from a camping trip to Wales, and there, I think, I have identified my issue.

Every time I go away on holiday, or have been through a period of illness, I think that I want to take a bit of knitting to keep myself occupied, and so I cast on a nice, simple stockinette sock. I knit away for a bit, and then return home, or get better. And then I wish to knit more complex items that I need a tad more concentration to work on, and so the sock gets put in a drawer for ‘later’. The next time I go away the same thing happens, and then it becomes a problem. 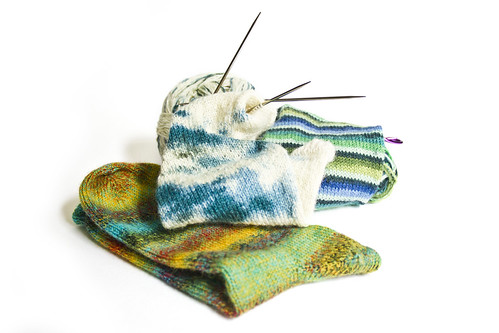 For some reason, the recollection that I already have a nice, simple plain stockinette sock on the go never occurs to the part of my brain that craves that same simple, mindless knitting. Something makes me cast on afresh, which is why I have at least three stockinette socks on the needles. Holidays, trips to visit grandparents and a bout of scarlet fever have all lead to part-knit socks, and there are probably more around the house that are waiting to be discovered.

Perhaps the worst thing is that I have no idea where the remainder of the skein of Admiral Ombre yarn happens to be. I don’t recall having seen it for, well, over a year. So this sock may never get worn. I could knit it’s pair as I can tell by the stitch count the needle size I would have used, but that yarn seems to have disappeared, perhaps because it was too far forgotten.

5 thoughts on “Forgotten Knits And The Sock Walk Of Shame”