On Saturday I cast on my Wedding Shawl, to start my countdown of one year until the biggest and most exciting day of my life. It’s something very special to me – a handmade part of a day that I couldn’t even have dreamed about a couple of years ago.

I cast on the stitches for the shawl using the Patons baby Wool 2-ply that I picked up for very little money a couple of weeks ago, and began knitting the stockinette portion of the shawl. A good number of rows in I noticed that one of the two plies that made up the pure wool laceweight yarn was broken, so I undid the row to the beginning, broke the yarn and re-knit with the new end. A few rows later it happened again, and then about twenty rows on there was another break in one of the plied of yarn that broke completely as the strain was put on the one remaining ply.
I have had a good look at the yarn and the structure is sound, but in some areas it is not consistently plied, and here there appear to be weak spots. I gave the yarn a good examination for bugs or other little nasties (just in case!), but it appears to be just an occasional weakness in the yarn.
However, it’s just not going to work in a two-ply lacy shawl, and I really don’t want to find my hand-knit shawl developing a large hole on my wedding day if the yarn decides that it has just reached breaking point, so I have unravelled the work that I have done and am now back to square one.
Not to be too disheartened I have cast on another project with the yarn, this time holding three strands (six plies) together. I have cast on a simple but effective scarf on large needles for a relatively quick and satisfying knit. 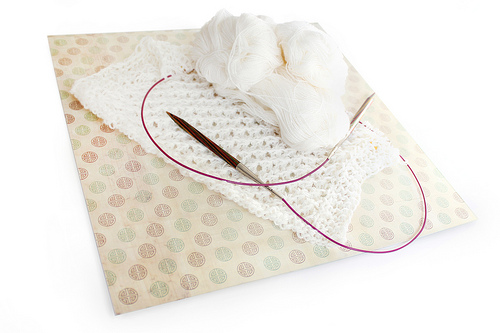 I’m hoping that it will make a nice, squishy large-scale lace scarf, which should be relatively warm due to air being trapped between the multiple strands, but I’m not too precious if it doesn’t work. It’s a project to tide me over until I take delivery of the replacement yarn that I have ordered – some gorgeous Debbie Bliss Rialto lace in white – a beautiful, relatively high twist and strong laceweight yarn.
Author: Mimi
Filed Under: Craft, knitting, yarn
Tags: lace, scarf
Holiday Crafting And Shopping, Plus Some Wedding Knitting
FO: Badger Badger Badger Badger Soft Toy

2 thoughts on “Big Trouble With Little Balls Of Yarn”