Because I am obviously super cool I have been invited to an 18th birthday party next weekend for someone that I have only met once. It’s pretty much like I am back in my university days, rocking up to parties held by people who were quite literally strangers. On the downside I have work the very next morning (a double downer as I will be working next Sunday, which is never much fun).

So, I was thinking, what would an uber-trendy 18 year old like more than a handmade card? Probably many, many things, but hand making a card prevents me having to rely on my ageing memory to pick up a card from the supermarket next time we pop in in the way home from work, something you have to bare in mind when you are yourself so far past 18 years old and rapidly losing sight of how it felt to be that young.
So, armed with a load of paper, some felt, a few buttons and some sewing thread, I set about making a card.
Firstly I cut three leaves from green felt and then layered them over slightly larger leaf shapes cut from a few scraps of green card. I then sewed a spine of back-stitches down the centre of each leaf to hold them together, and because sewing is cool. 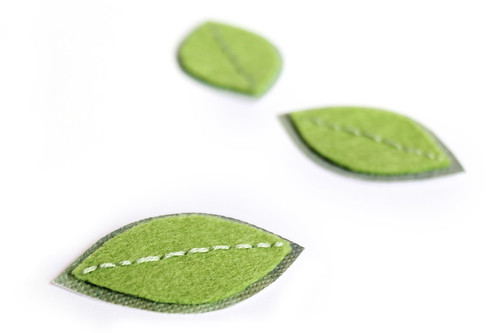 The needle slides quite easily through the card as long as you have a nice, sharp sewing needle.
Next, I had a look through my patterned papers to find some coloured sheets to cut some circles from, and found one sheet that happened to be printed with concentric coloured circles which I thought would make do for flowers.  I sewed a button to the centre of each flower (or you could glue them on if you’re already bored of sewing and can’t appreciate just how cool sewing is) to add a little further interest. 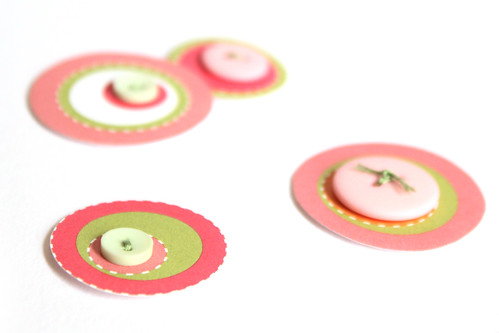 Obviously I was lucky to just have this printed paper in my stash, but if you don’t have anything similar I have put together a printable download at the end of this post.
The next thing I created was a rosette, simply made from a circle cut from some spotty patterned paper, stuck to two thin rectangles that were supposed to represent ribbons. I trimmed the ends into double points to try and help it appear more ‘rosette’ like, and added the birthday girls milestone age to the centre of the rosette. I also sewed a line of quick running stitches around the edge of the centre circle of the rosette to help it tie in to with the other details of the card. 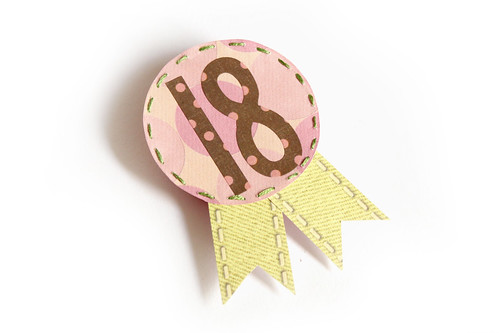 I then set about that part of card making that always totally throws me: ‘matting and layering’ as I have heard it called. Please bare in mind that I have made about ten greetings cards and have very few fancy gadgets or knowhow. I don’t know if there are any design rules to follow with the matting and layering, but as far as I can tell it just means sticking down a few rectangles of coloured card or paper, which is what I did. 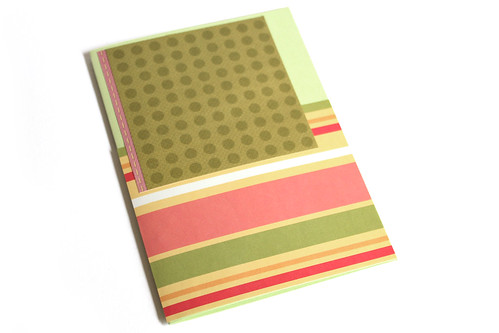 Ta-da! There are now further layers of paper on the paper. The only thing I tried to do when sticking these papers down was to pay attention to getting a rough family of colours together, though I was limited to the papers that I had available. If I had a printer I might have made use of the handy dandy co-ordinating colours download sheet I have put together at the end of this post… but I don’t.
Then came the final part – sticking stuff down. I arranged the flowers and leaves at the top of the card and the rosette at the bottom, and then I stuck all of the bits together. I used double sided tape as that was all that I could find, but you could use glue. I actually love double sided tape as it doesn’t make any mess and needs no drying time, perfect if you are as impatient as I am. 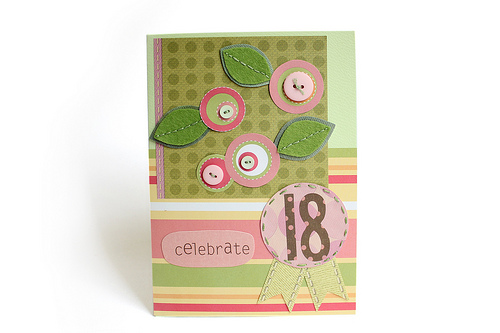 And this is the finished card. There is also a little greetings panel that says ‘celebrate’, which fortuitously fell from my stack of papers as I was tidying them away, so I stuck that on, too.
This card is simple, quick and effective to make, especially if you happen to have some co-ordinating paper to hand. And if you don’t? 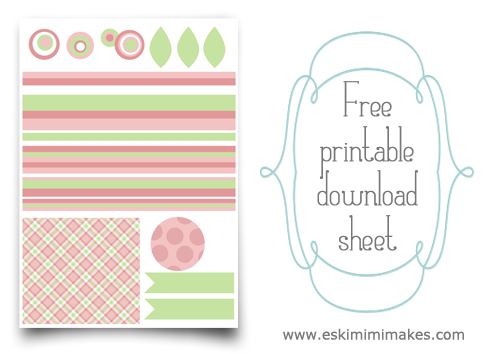 There is a free downloadable and printable sheet of background pattern papers, leaf shapes, circle (flower) shapes and the components to make a rosette, available here.