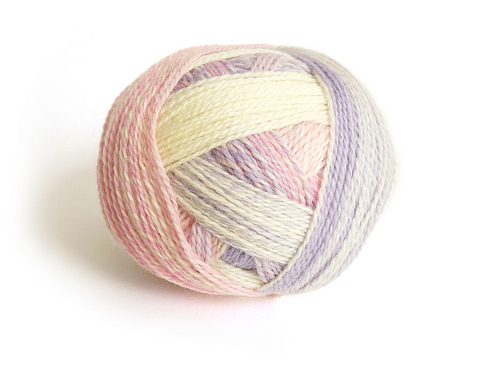 This lovely little Crazy Zauberball has joined my collection. It’s quite different from most of the other Zauberball colour combinations because it is so light in colour. I haven’t seen it stocked in many places and only know of it because a chance sighting of a single ball a year and a half ago.

In October 2011 I moved into the world’s smallest flat with the world’s tallest man, up in Whitley Bay, Tyne & Wear, in North East England.

There I found my first ever (and to this date, only) Local Yarn Store – the fabulous Ring A Rosie. It was about five minutes from my front door and the warmest and most welcoming place in England. For the few months that I lived in Whitley Bay I attended the store’s Knit & Natter get togethers and spent a few hours in the company of some lovely knitters and wonderful characters.

On my first ever trip to the store (whilst I was still getting my bearings in my new town), Mr Awesome and I were having a browse in this wonderful Aladdin’s cave when I spotted a Zauberball unlike any I had seen before. It was pale lilac and pink on cream, and immediately caught the eye against the bright saturated hues of the Zauberballs that surrounded it. There was only one in stock and I picked it up and fondled it a bit before putting it back down. At this time in my life I had no money at all. I was struggling for the most basic of things and yarn of even the cheapest acrylic variety was barely a pipe dream. The one luxury I gave myself around then was to save up my £2 a week to allow me to attend the Knit & Natter at Ring A Rosie, and it was a lifeline by way of companionship, warmth and a welcome. I also ate a few of the biscuits and little cake bars that were provided when I attended as sometimes it would mean that I couldn’t afford an evening meal, and the lack of money would mean that I’d always have to excuse myself from the offers to go to a little place for a bite to eat afterwards, feeling a little embarrassed and shy.

But on my way out of the shop I would usually eye the Zauberball and it’s pretty light colours. Only two months later I moved again, this time down to the West Midlands. The move was sudden due Mr Awesome gaining a job offer, and things were rushed to the point that I never got to say goodbye to the knitting group or have a last daydream and a wander around the shop.

As the last year and a bit have passed, things have been bright in my life. I am happy and content, though part of me always wishes I had been in Whitley Bay a little longer, simply because of that wonderful shop and the knitting group that made it their home for a few hours each week.

And that Zauberball never left my mind, either. I had spoken to Mr Awesome about it a few times and showed him when I finally discovered what the colourway was called one day last week: Cloud 7.

So, you can probably imagine how bowled over I was when Mr Awesome, returning home to me (after I had myself had to take a day off work sick with a bad stomach bug), rolled a Cloud 7 Crazy Zauberball across the duvet cover to wear I was laying.

Obviously I was overjoyed. Partly because Mr Awesome is awesome, partly because the yarn is stunning but also partly because it keeps making me think of the wonderful shop and knitting group that I found at Ring A Rosie in Whitley Bay.

I had a look to see if there is an online shop, but I sadly can’t see one. It’s a shame because I kind of feel like I owe them a purchase, however small. If I am ever in that part of the country again it will be my first port of call, and I’d urge anybody who passes by this beautiful part of North East England to drop by and have a browse, because you will always find both wonderful yarn and wonderful people inside.