Knitting And The iPad

Recently I found myself ill and in bed for a few days. I think I was really quite ill because when I tried to return to work a couple of days earlier than I perhaps should have the boss came over to ask if I was feeling better and then, looking at me stepped backwards and exclaimed ‘oh god!’ before asking why I had come back in. There’s nothing like someone recoiling in horror at the sight of you to make you slink off back home and enter the duvet cave.

Anyway, whilst I was in bed feeling like a bag of damp old socks, abandoned by Mr Awesome who thoughtlessly had to to to work and earn some pennies, I was left in charge of Mr Awesome’s new iPad. It was there so I could have access to iPlayer if I felt up to it without having to move from the comfy horizontal position I had found myself in.
However, over those few days I not only realised how wonderful iPlayer was on the iPad, but also just how perfect a tool it was for knitting and designing, and that I obviously needed one as a very important knitting and designing tool. So I got myself an iPad mini. 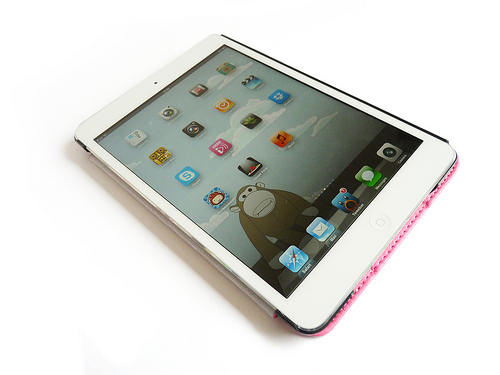 It’s a lovely thing to behold and use, and I really have found it to be absolutely wonderful to knit with. A lot of the patterns that I knit with and design use charts, which I find quicker and easier to read than written instructions (though following a discussion on this blog I now do always try to include written instructions in my patterns… see, I do listen once in a while). Anyway, using the cleverly designed SmartCase as a stand to hold the iPad at a perfect angle, keeping track of charts is now an absolute joy. 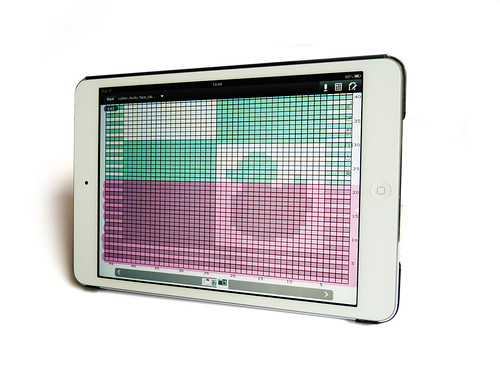 There are a few apps that allow you to import or download PDFs and make notations of different forms. The app pictured is called ‘DocAS’ and allows you to select a highlighter colour and just draw a line over the chart line you are on and it will automatically recognise it as a straight line and apply it exactly where you wish. The app also allows sticky notes which minimise down to a little icon placed anywhere on the pattern, voice memos which are similarly placed, and freehand or typed notes each with many various options and styles, so it’s perfect for making notes and highlighting both charted and written patterns. It’s quick and simple to use, and there is a free version available, though it is limited to only allowing five PDFs loaded into the app at any one time.
I have also bought an alternative app called Goodreader, on the recommendation of a couple of knitters. This powerful app contains many of the same features as the DocAs app, though some of them are implemented in a slightly different way. It also allows me to connect wirelessly to my computer to import patterns from there and supports the ability to open PDFs from the browser or when downloading from Ravelry or other sources.
There are a few other knitting related apps that I have downloaded from my account as I also have them on my iPhone. Knit Counter is fabulous at allowing you to keep track of multiple counters in multiple projects (handy for the less monogamous of knitters) and has safely stored many a resting place when I have gone to make a cup of tea, or abandoned a project for weeks and months at a time. I have loads of quick and simple photo apps for quick snapshots (though I still prefer a ‘real’ camera for blog photos) and I am now back in the habit of reading blogs as I can use the Google Reader ‘next’ tool (found in the goodies section) to go from one unread post to another, actually on the author’s website, finally allowing me to enjoy the whole surrounding of their blog the way that they designed it to be read, and (this being the biggest bonus of all in the blog-reading wonder that the iPad allows me) comment on blogs with ease.
And do you know why else my little iPad is a perfect knitting companion? 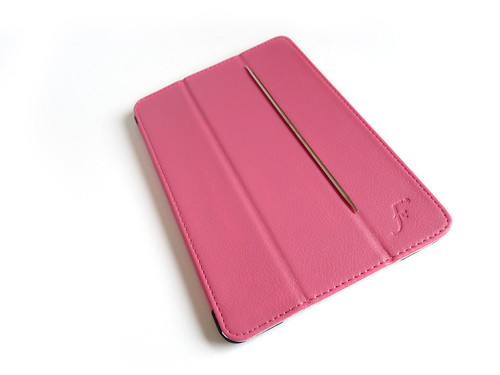 The case is fantastic for holding the ‘spare’ DPN whilst you go and make yourself dinner.
Oh, and astute readers may have noticed a familiar face in the wallpaper background of the home screen. Giantmonk says hi. 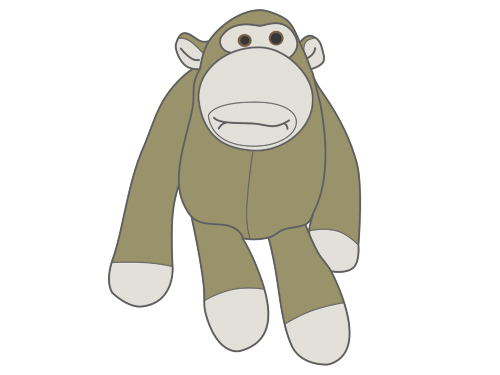 3 thoughts on “Knitting And The iPad”