WIP: A Hat Full Of Stars

Some time before Christmas I read a couple of post from Vivianne of Kismet’s Companion, detailing her recent projects, some of which used a pretty yarn that was strewn with occasional sequins.
Usually I eschew ‘novelty’ yarns of the eyelash and fluffy varieties, and have never found a yarn with decorative inclusions that I might fancy using. However, I was on a recent shopping trip with Tanya of Tanya’s Blog when we just happened to chance upon a yarn store. Whilst we were in there I spotted a couple of skeins of Rico Design Creative Galaxy Chunky in two different shades. 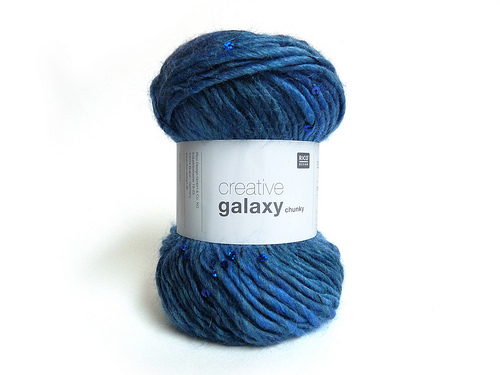 One skein I bought is a rich blue with a slightly undulating tone along the length of the yarn, with matching tiny sequins. The other is in shades of grey and light pebble brown, with silver sequins. Being a chunky yarn the sequins are small enough and sparse enough to add a bit of fun and sparkle without overwhelming the knit.
I had a project in mind for one of these skeins as soon as I bought it – the Subway Hat from modern Top-Down knitting. I have fancied making this hat for a while, for it’s face-framing, ear-warming shape, but have never had the right weigh yarn. It is also a lined hat, so I knew that would help to ensure that the sequins did not irritate around the face. 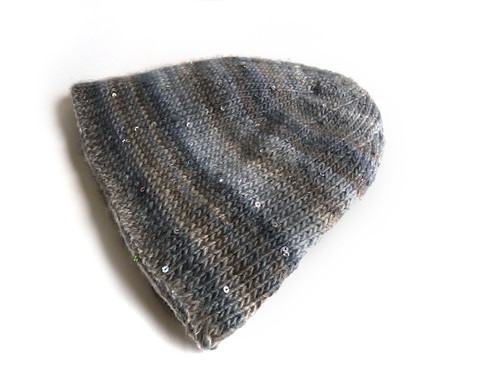 The greys of the yarn are a nice wintry mix of colours, so I have used that skein to complete the knit. There are two main adaptations that I have made to the pattern. Firstly, despite the name of the book, I have not knit this hat top-down. I have started at the open edge and worked upwards, simply because  prefer the look of decreases to increases. Secondly, I sped up the rate of increases, to stop the hat from forming a conical shape at the back of the head. My head isn’t shaped that way, and I don’t wear a bun or ponytail that the hat would need to accommodate, so it wasn’t needed and I didn’t think it would be flattering from behind, as many of the Finished Projects on Ravelry seem to show that the hat is lengthened in the back.
Though the knitting is complete I am still in the process of lining it as it is not a particularly easy task, because both the yarn and the recommended fleece lining have quite a good deal of grip, making aligning the two layer and keeping them in place quite difficult. I may have to add a few strategic holding stitches between the two layers once the hat is finished and perfectly lined.
The knit itself is a very simple projects and easily completed in a long evening. All that remains is for the lining to be completed and to test to see if it does a decent job of remaining on my head in a good gust of wind.
Author: Mimi
Filed Under: Craft, knitting, WIP, yarn
Tags: embellishments, hat
WIP: A Perfectly Awesome Hat
FO: Two Treasure Chests

6 thoughts on “WIP: A Hat Full Of Stars”