Recently I have been asked in a couple of interviews and blog pieces what my tips to other knitters and crafters would be. I often think that the most important thing is to keep on learning, and never decide that your skill set is complete without being prepared to try something new, but a couple of times I have reflected afterwards and wondered if I should have said something additional to this. The reason for this is because there has been something on my mind, and it is something that I truly believe yet have been guilty of shying away from myself – to knit with your best. Not only your best eye for good design and for those patterns that you’d best enjoy, nor producing your best work, but also knitting with your best yarn.

That’s not to say the most expensive yarn, but the best yarn for the project, and the one that will make the most desirable finished item. Take this skein: 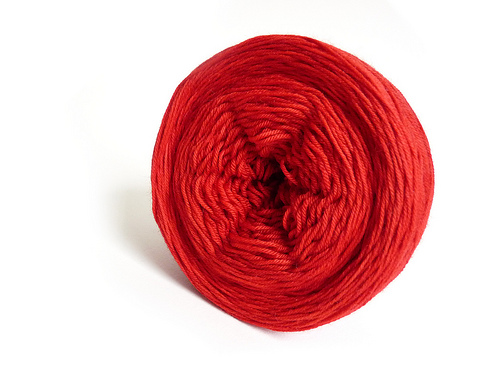 It is a gorgeous merino blend yarn dyed by Black Cat Fibres, in the most vivid shade of red. it’s a special skein of yarn not just because of it’s beautiful nature or the fibre content, but because it was given to me as a gift by the dear Vivianne of Kismet’s Companion.

So, I did what was perhaps natural and tucked it away as a special skein of yarn and carried on knitting with my not so special yarn, because the special yarn was too special. So when I came to choose yarn for a project I would go for my not-so-special yarns to save this for… for… for what? I don’t even know.

So, I started the weekend with slightly itchy knitter’s feet (a turn of phrase – I did not make scratchy socks), and wanted to cast on something new. I searched around a few patterns on Ravelry for a while but nothing caught my eye. Perhaps because I was in a creative mood and wanted to design something myself.

So, I turned to the greatest source of inspiration: The Stash. The first thing I did was to put aside the box of ‘special’ yarns, because they were too special, and start looking through the less special box.

But then I put aside that silly notion and picked up the little selection of ‘best’ yarns, where this red skein caught my eye. It had been such a snowy weekend that it immediately brought to mind an idea of Mr Tumnus in the snow-laden land of Narnia, so I knew straight away that I wanted to knit something to go around my neck, such as the bright red scarf that Mr Tumnus was known to wear. But this would be something as beautiful as his scarf was practical, so I decided to design a long shawl that would double as a scarf, which I hope will be both beautiful and functional, and knit from my best yarn.

8 thoughts on “Knit Your Best”