After the most wonderful of weekends with friends I got into the car yesterday lunchtime to travel home with a slightly heavy heart that all of the fun was over. As it was Monday and we had the day off, I asked Mr Awesome if a slight detour would be possible, and as I have no local yarn store to soak up my sadness, the closest thing I could think of was Hobbycraft.

Now, I know that there are those that like to point out the relative failings of Hobbycraft in comparison to an LYS, but if you aren’t lucky enough to have a well-stocked shop of yarn near you, or your pockets aren’t too jangly with money, it’s an alternative, and yesterday it was somewhere that offered a buy two get one free offer on all balls of yarn. 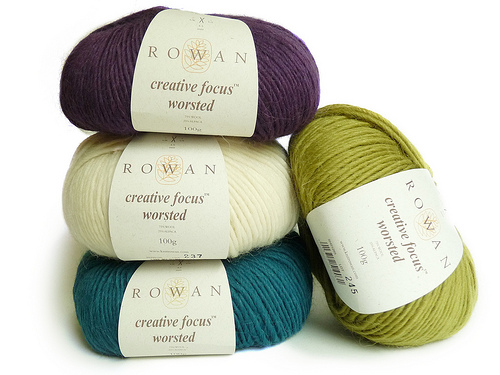 So, I picked up six skeins of yarn, including some Rowan Creative Focus Worsted in four different colours. Firstly, this yarn is pretty good value anyway, at about £7 for a 100g ball of natural fibre yarn, but on offer it worked out to £14 for 300g of yarn, about £2.30 per 50g. The colours are bright and vibrant and it’s brilliant to have an available source of worsted-weight yarn here in the UK (usually I would substitute Aran or DK depending on the drape I wanted the project to have, but it’s nice to at least have the option). The yarn may be better known to US knitters as Nashua Handknits Creative Focus Worsted, but it has recently swapped labels and is now available on UK shores.

When I got home I decided to cast on the Puffin Apple hat, as I had decided before the weekend that the yarn I I had originally decided on just wasn’t working, and I really wasn’t fond of the colour, and the weight, structure and shades available in this yarn were far more what I was looking for.

Looking at the comments on Ravelry this yarn would appear to have a rather mixed reception. As with many areas in life, people are most vocal when they have something to complain about, so though the yarn has a 4 out of 5 star rating, the comments are almost wholly negative. It seems that the main consensus in the comments is that the yarn is rough and ‘splitty’. About a third of the way into the hat I am not finding it unpleasant to knit with and am not finding the resulting fabric rough, either. Despite the fibre content and structure of the yarn it is rather ‘crisp’ when knitted up, but the surface is soft, with a slight halo. The wool and alpaca used in the fibre blend don’t appear to be the finest of fibres, but they are smooth and pleasant to work with. The effect of the cables are softened in this yarn, much like in Jen’s version, so I can only hope mine comes out anywhere near as beautifully. 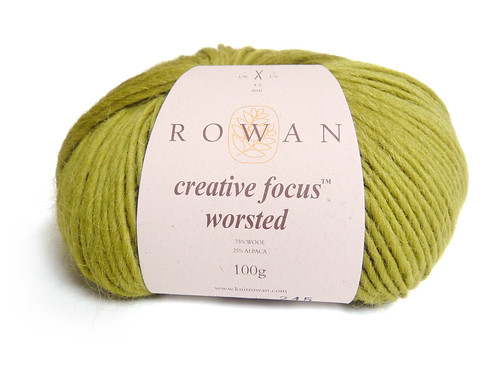 I’m knitting Puffin Apple in an attractive apple green shade, partly because of the apply-ness of the colour and partly because when I was being las and dispatched Mr Awesome into the bedroom where I had been taking pictures of my new purchases to bring me back a skein in the colour of his choice, this is what he brought in. It’s like we’re joined at the brain, or we both have fabulous taste.