It wasn’t until I was about 70% into the knitting of my Puffin Apple hat that I finally conceded to myself that the beautiful cabled design wasn’t only softened by the yarn, but pretty much erased from view. The appearance of the cables is softened further by the textured background, which looks perfect in the recommended yarn, but less effective in the single-ply, loosely spun fluffy yarn which I had used.
I had tried the hat on and concluded that in some lighting the cable pattern was quite discernible, though in others I struggled to see it clearly, and if I hadn’t have known it was there I might have thought it to be some curiosity of the knitted fabric. 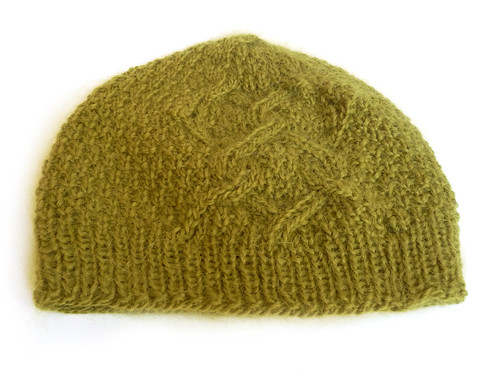 Still, I knitted on because I was enjoying the actual physical act of knitting the hat, with its mixture of interesting cable panel followed by the Easy Street of the checkerboard patterned broken rib.
The hat has sat, finished, by the side of the sofa for the last few days. I have enjoyed putting it on my head because the fit is sublime. It has just the right amount of ease not to squish my hair yet not slip around, and is just the perfect depth for a hat, but it was a shame that the showpiece element of the design was so obscured.

I sat at lunchtime yesterday thinking what I could do to make those cables pop just a little more. I thought about running a zig-zag of stitches over the backs of the cable lines and pulling them tight to make the cables stand proud, or maybe backstitching along the edges of the cable to draw attention to them, but decided against each idea as I was in a bit of a despondent mood. 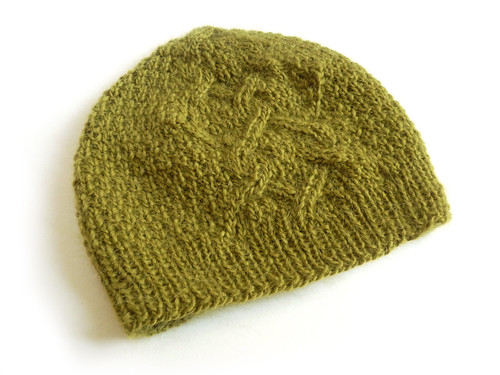 Then, on the way home, I decided that I wanted to add a touch of needlefelting. Or maybe beading. Or why not both? 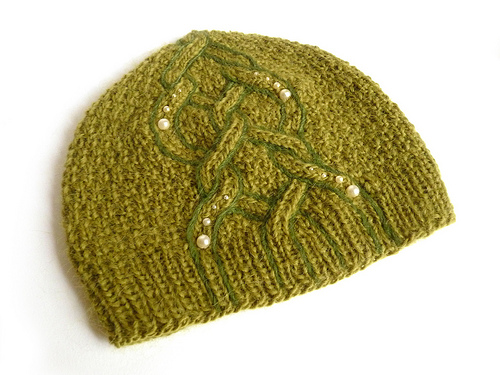 Using an odd length of another single-ply yarn (in this case a couple of metres of Lamb’s Pride Worsted) I very simply needlefelted an outline to the cables, following the lines that the cables had formed and cutting the yarn to the appropriate lengths. I then sought out a few pearl-style beads in three sizes – eight very small, four medium and four large, and decided on their placement before sewing them into position, and I’m really pleased with the result. On its own, the needle-felting was enough to bring the cable design alive, but the touch of beading just made it even more special. I try not to go too overboard with elements of embellishment, for fear of gilding the lily, but in this case it just made the hat a piece that I wanted to wear immediately (and as such I wore it to work today). 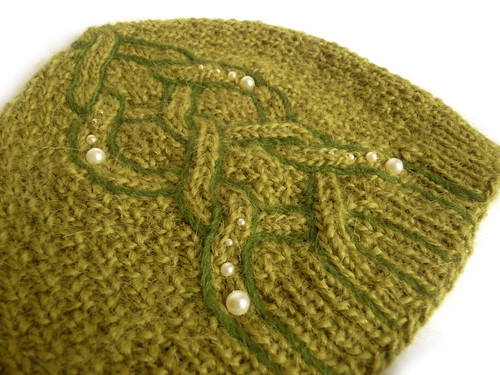 I’m now totally smitten by the finished piece and I can see that it is going to get a lot of use over the following months. 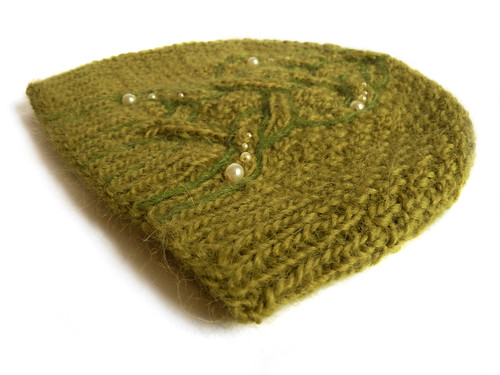