WIP: Slowly Does it Stockinette Sock

I haven’t done much knitting since I started my new job, mostly because in the evenings I have found that once I have taken off my shoes, got changed and got through the lengthy process of deciding what we want to eat and actually cooking and eating it has been time to relax in front of the TV, perhaps with a glass of wine, and forget about the day. Usually I have always been one to knit in front of the television, but over the past couple of months I have just wanted to totally numb my brain and get onto the very careful job of preparing my tired mind for sleep. When I have put in a little time for knitting it has been the most simple, automatic kind of knitting there is, which for me is a stockinette sock. 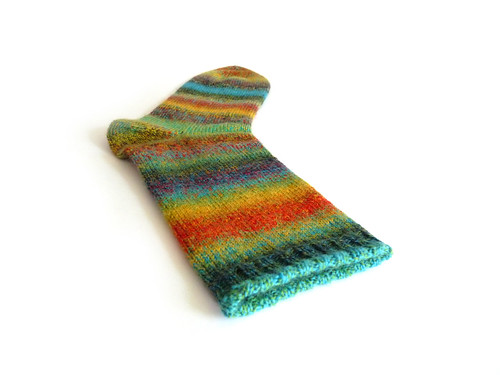 This sock is knit from Schoppel Woolle Admiral Ombre yarn, in the shade Tropical Fish. I cast this sock on for the short three night camping holiday in Wales that I took with Mr Awesome a few weeks ago. People in the UK might remember it as the week that the Welsh campsites flooded and loads of people had to be airlifted to safety. Luckily we weren’t in one of the campsites that flooded to that degree, though we did go to sleep to the sound of thousands of raindrops beating onto the canvas only a few inches from our heads every night.

The sock is a plain stockinette affair knit on 2.25mm needles – my favourite needle size for a plain stockinette sock, as I can get 72 tiny stockinette stitches onto the needles and make a nice, hardwearing sock. I tried something slightly different with these socks in that I didn’t do my usual short row heel, but instead an afterthough heel with paired decreases. I have to say that I am not enamoured with the effect. The decreases leave a slight ridge and between the decreases it left a line of small holes, which I would be worried might turn out to be weak points in this hard-working area of the sock’s construction. 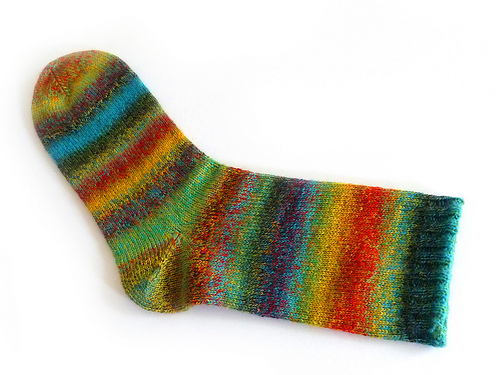 I haven’t started the second sock yet, and to be honest I am starting to amass a little army of single socks that have never been worn as they don’t have a special partner to call their other half. I might tackle one of these more adventurous socks and save the second stockinette sock for when I am in need of a bit of mindless knitting, or as refuge from the colourwork projects I have planned in the near future.

9 thoughts on “WIP: Slowly Does it Stockinette Sock”