NES Knitting Machine – The Greatest Thing That Never Was

Fellow knitting nerds, you are about to mourn something that a couple of days ago you didn’t even know existed. Well, it didn’t exist, but it might have, and that’s the point, because it didn’t and it should have, and now you will be privy to the injustice of it all.

Behold, if you will, the Nintendo Entertainment System peripheral that would have made you doubly cool. The NES Knitting Machine: 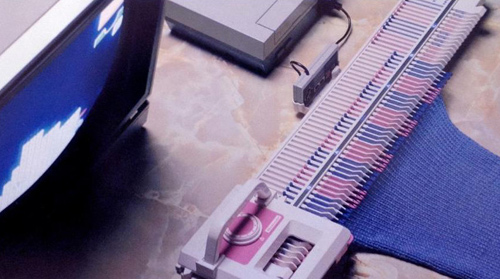 Yesterday the former head of Nintendo of America posted teasing pictures of a product that never came to light on his Facebook page, pictures which originally came from the brochure of the Winter Consumer Electronics Show, which was held in Nevada in 1987, where it was showcased to potential buyers and stockists.

The software and peripheral would have allowed knitters to design and knit their own designs using the machine, but it wasn’t taken seriously by the head of Nintendo America and he was less than enthusiastic about the potential of such a device, and whether it ws due to that or other factors it never saw the light of day. It’s a bit of a shame, as the advert makes it look like it would have been all kinds of awesome… 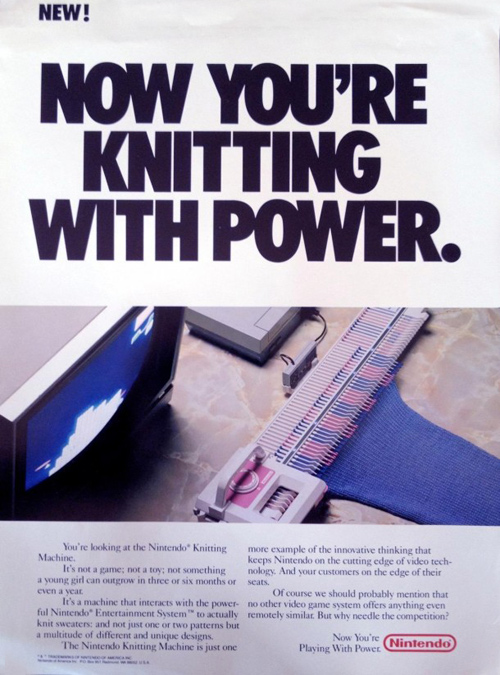 You’re looking at the Nintendo Knitting Machine.
It’s not a game; not a toy; not something a young girl can outgrow in three or six months or even a year.
It’s a machine that interacts with the powerful Nintendo Entertainment System to actually knit sweaters; and not just one or two patterns but a multitude of different and unique designs.
The Nintendo Knitting Machine is just one more example of the innovative thinking that keeps Nintendo on the cutting edge of video technology. And your customers on the edge of their seats.
Of course we should probably mention that no other video game system offers anything even remotely similar. But why needle the competition?
Now you’re playing with power.

With thanks to the ever lovely Dimrill for bringing my attention to this particular piece of awesomeness.