Actual Crafting Content May Be The Best Thing Ever 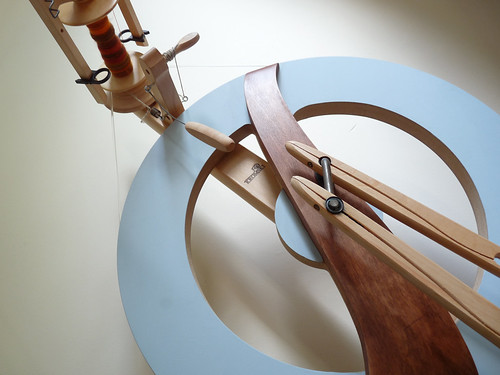 Although I haven’t been able to get very much crafting done these last couple of months, it was never far from my thoughts, and I looked towards a dream of mine when I decided to treat myself to something to congratulate a huge milestone for me, celebrate all that was good in my life and also to make my new job seem all the better for me. I bought myself a spinning wheel.

Now, I do admit straight f that I know nothing of spinning wheels, only that I really wanted to try one, but I’ve never seen one and don’t know anyone who has one. I did a little bit of research before choosing my wheel, and eventually settled on the Kromski Fantasia for a combination of reasons. I say combination because I do not want people thinking I chose entirely due to the connection with the Neverending Story. That is only part of the trust.

First off, admittedly, was price.  The wheel has a relatively low price point because he main wheel is constructed from MDF. Lots of Fantasia owners spend a lot of time and patience decorating their unfinished wheels. I painted mind with some chalky blue paint and decided she was beautiful. 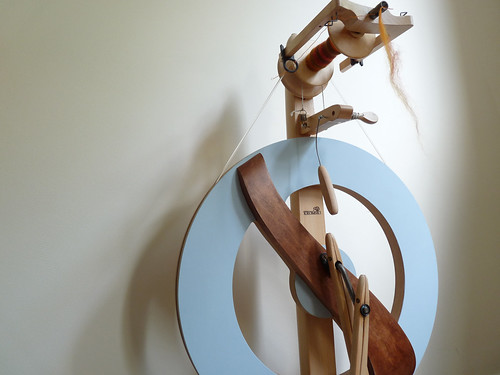 Also, I really like the small ‘footprint’ of the wheel. It takes up very little space and sits neatly against the wall, so it hasn’t become a feature of the room. I was well advised by many people that I might be able to pick up a second hand Ashford for not much more than the new Fantasia, and I did consider it but fell to my choice both for the small space required to store it and the wonderful interchangeable whorls. I actually got the set of two whorls free, which basically means that I now have six different ratios to spin at for the price of the wheel.

The one problem I did have with the wheel was the whorls were actually a little tight to slide on. Both myself and Mr Awesome tried several times but it was actually declared impossible. We bought a small round file and filed away the hole in the centre of the whorls until they went on smoothly.

I’m actually really pleased with my choice. The wheel is simple and unfussy, spins smoothly on silent ball bearings and comes with a few little touches like a magnetic system to hold on the flyer, is double treadle and has and sliding hooks which make the wheel lovely to use.

And it makes yarn. My first yarn was a very basic two-ply yarn made from a slightly rough fibre that I cannot remember the origins of. 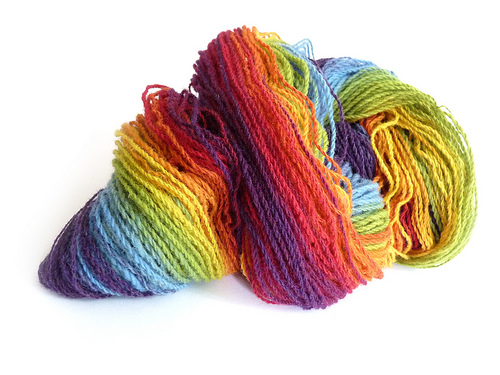 It spun up into about 340 metres of worsted/light Aran weight yarn. The colour changes of the two plies more or less line up along the whole length of the yarn, but I think that is more a touch of luck than of skill. 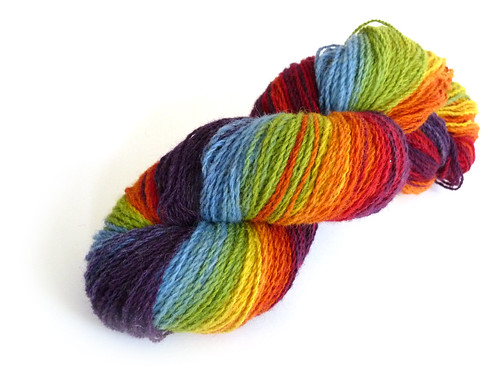 I haven’t soaked this yarn yet, but it seemed to come out rather well balanced, so I think it will need minimal work before being knit. I’m not sure what to make from it yet. I wondered whether I should make a bag or cushion to get the most out of the colour changes. I did also ponder a (lined) hat, but I don’t think I would get all of the way through the rainbow to make the most of the spectrum. 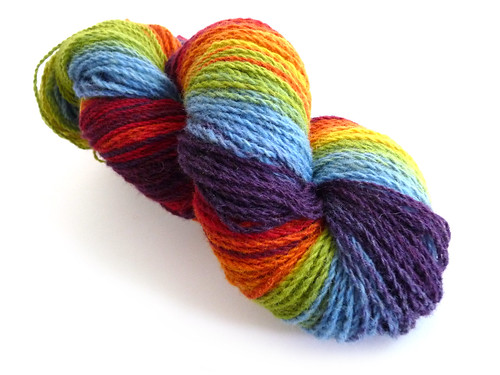 I’m pretty pleased with my first attempt and enjoy being able to spin in front of an episode of House at the end of a long and brain-aching day. It’s quiet, gentle and meditative, and a nice way to wind down.

I’ve now moved onto the third play of my second spinning project. This one is from some merino fibre I purchased a couple of years ago and finally can use, and is made from all the colours of a warm autumn day. 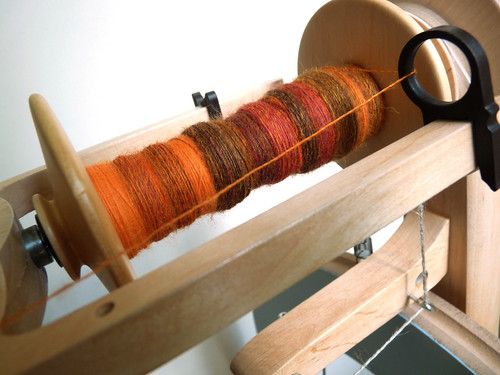 Now, where there is yarn there is inevitably knitting, and I have a couple of great surprise projects on the go at the moment, which shall be revealed towards the end of the year. I’ll have to also think of what to do with the rainbow yarn so I have some knitting progress I can get back to blogging about soon.

Now I have loads of blog reading to catch up with, too.