Last year I spent about six months without an internet connection, and one of the things I missed the most during that time was Ravelry. I had a phone that had browsers capabilities and an occasional 3G signal, but the functionality of Ravlery was lost on the iPhone, many features being too fiddly to use without great frustration. 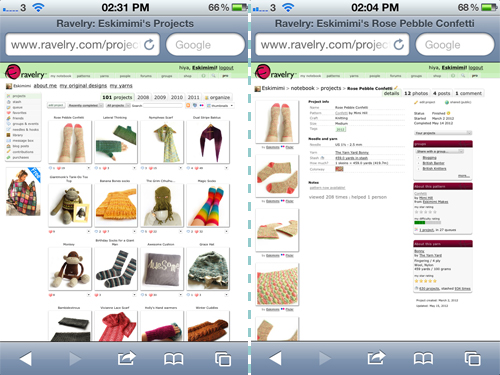 On the surface, Ravelry works on the Safari browser built into the iphone in exactly the same way that it does on a computer browser, but at a much smaller scale. You can zoom in and out, but it’s just too small to use comfortably and easily. One thing that isn’t possible  via the browser is uploads from a mobile device. So though you might snap project pictures on the go, you cannot upload them to update your projects.

Over the past couple of months, work has started on a new mobile browser version of Ravelry, but work seem slow and for a long while seemed to consist of just one menu times telling the user to come back later. Whilst knitters waited for further developments, a new name appeared on the scene in the shape of Wooly. 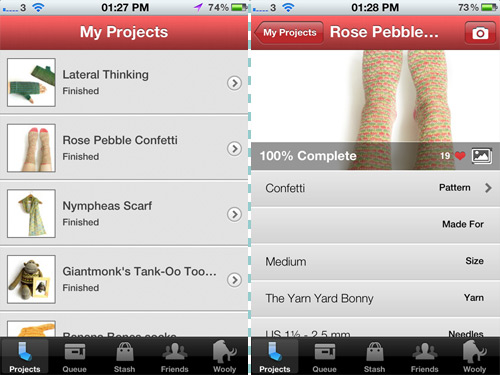 Priced at £1.99 ($2.99 USD) the idea seemed promising. An app that allowed access to your projects, queue, friends list an a few other things. But that was all that it offered: access. An update was released yesterday that allows the user to upload (but with no option to delete again) pictures, but as yet the app totally lacks any functions to edit project details, add or queue new projects, or search the pattern or yarn databases for information on the go. The app is lacking in functionality as the things that you really want to be able to do whilst on the go are to make project notes on your current projects, to track any modifications, and to look up new yarns and patterns whilst out yarn shopping, or queue patterns recommended by knit meet friends. The Wooly app works like a glorified gallery. It doesn’t even work very well as a ‘read-only’ way of accessing Ravelry, as without a search function, the scope of projects and pattern you can access is limited to your own and those of your listed friends.

In the meantime, Ravelry’s own mobile app grew up and developed a few new interesting features. And that’s kind of the problem. The Wooly app may work well in the future, but it’s just a shell at present and shouldn’t have been released yet. It doesn’t offer anything like £1.99 worth of functionality, especially with the Ravelry mobile site offering the same features (and more) for free. If the folks behind Wooly had released it as a fully-formed app, then maybe it would be worth the sum, but in its current form it feels rushed, broken and doesn’t offer anything new. I would recommend that folks would be better off pointing their £1.99 or $2.99 towards the Ravelry donations page with a note of encouragement to Casey to continue with the good work on the mobile site.

Sorry for the sudden quietness last week. I started a new job a couple of days after receiving the offer, and as it all happened so quickly I never really had any time to organise myself. I shall sort out the announcement of the competition winners this Wednesday!
Author: Mimi
Filed Under: Craft, crochet, knitting
Pattern and FO: Confetti (Rose Pebble) Socks
De-lurk and a catch-up.