Whilst I was feeling sorry for myself in a cloud of influenza last week I found it difficult and uncomfortable to get any knitting done. I was getting frustrated with anything cumbersome or difficult to manipulate, so I turned tot he smallest and most portable of little projects, some little cross stitch motifs. 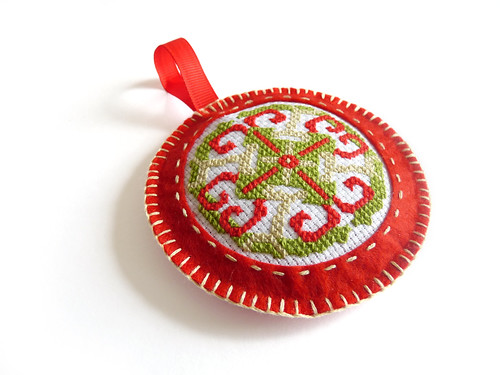 I wasn’t too pleased with this first bauble, not because it looks anything other than perfectly charming, but because I don’t think the impact was quite equal to the amount of time and effort spent on it. It isn’t a large design, and the shape is rather simple, but what you might not be able to see from the picture is that it is absolutely full of fiddly half-stitches. I am sure they are bread and butter to a lot of cross stitchers, but I have stitched enough little motifs now to know that I find most designs charming enough without those minute details, especially on a very graphic design such at this. I have two more baubles to make from this free kit that came with an issue of the Cross Stitcher last year, but I think I will knock up my own simple bauble design before actually stitching them.

The second little Christmas-themed project I stitched was from another little project kit included with a past issue of Cross Stitcher magazine (their ‘Christmas’ themed issues seemed to run over about five months, so Christmas and cross stitch must be particularly well suited.) 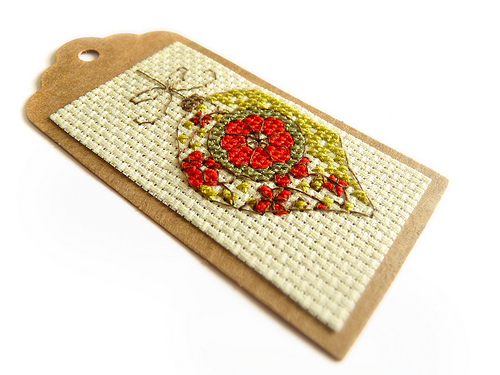 I enjoyed this second little project a great deal more. It still features a few of those pesky half stitches, but in this case I think they were used to great effect. This design is more ‘organic’ in feel (in contrast to the geometric design of the bauble) and so lends itself to the detail afforded by the half stitches which occasionally help to keep lines fluid and smooth. Those fiddly little half stitches are fine when stitching on evenweave, but on aida I think they are best kept to use sparingly and where needed, and not just for the sake of it.

These two little fancy pieces have been put into the growing box of Christmas delights to adorn cards or be hung up around the house at the end of the year. First there is spring and summer to enjoy, and now that I am feeling better, more knitting to be done!