Whilst the poll has by no mean run its course yet, the first few hours of voting have produced what I think are some very interesting results. As the vote stands (though it may well have changed by the time you are reading this), there are currently 70 votes (62%) from people who prefer their lace patterns in chart form, 29 votes (25%) from people who preferred written instructions, and 13 votes (11%) from voters who have no preference. (The figures have been automatically rounded up or down by the poll, which explains those missing few percent).

If you are a knitter, in which format do you prefer your lace pattern instructions?

I deliberately did not put a ‘both’ option in the poll as I think that most people would naturally tick ‘both’ (I myself would) because very few people would turn down the offer of both sets of information, even if one were never to be used, and I wondered how much use a set of written instructions would actually get. Where people use both the chart and written instructions in conjunction and have commented to explain their working method, I am very appreciative of your explanations into how you combine both sets of instructions to best decipher the pattern.

Whatever the eventual outcome of the poll, the fact that 28 people have already stated a preference for written instructions has come as quite a surprise to me. I thought that the poll would be much more heavily in favour of charts over written instructions than the current 62% to 25% shows. To me, a chart not only conveys the information about each of the individual stitches in a clear and concise way, but also bears a visual resemblance to the item you are knitting in a way that written instructions simply cannot. If I lose my row counter from my needle (as I did this morning) I can easily glance at the chart and see exactly what row I am on, because the chart looks like my knitting. Moreover, with very long rows of complex lace instructions, I can see, by comparing my knitting to the visual clues in the chart in front of me, exactly where I am in the row I am working on, whereas whenever I try to knit from written lace instructions I have to read along the row, knit the ten or twenty stitches I can remember, then try to find my way along that row of instructions to the place that I left off. I’m perfectly comfortable knitting from written lace instructions, but just find it speedier to knit from a chart as I always know where I am, and I wonder if the same is true in reverse for those who prefer their instructions written?

I quite recently granted a request for one of my charted designs to be written out for a member of the Ravelry group Chart Haters Anonymous, when a user posted in the group requesting help with the charted pattern of the Rubber Ducky Facecloths patterns. 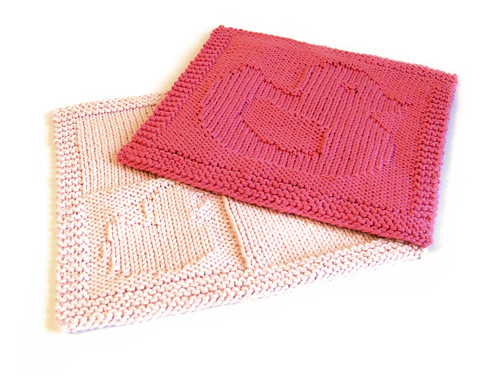 I was quite surprised when a kind and generous Ravelry member contacted me to say that the request had been made and could she (with my permission) convert the charted pattern into written form for the chart-hating knitter? I was surprised not because someone preferred to have their instructions in written form, but because the chart in question was for a simple design in only knits and purls, which I would have thought of as the easiest thing in the world to knit from a chart, or at least very simple to write the instructions for, line by line, yourself? But I guess some people’s brains just find the information in charts difficult to interpret. I would, however, always encourage all knitters and crocheters never to decide that they outright cannot achieve a technique, but to keep trying once in a while, as it will often just fall into place one day.

Whilst visiting the chart haters anonymous group to find the above URL, I actually came across another poll in the Ravelry Techniques forum, which asked a similar question to the one I asked above. 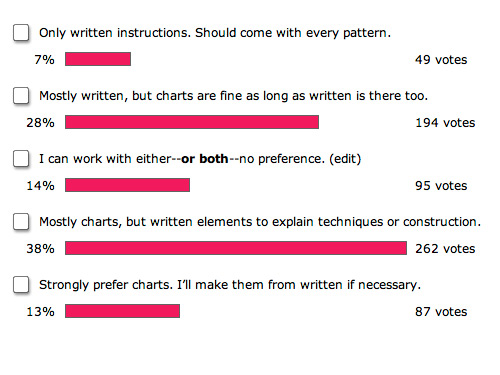 Now, do be wary to take those results with a pinch of salt. Firstly, the answers are a bit leading and unbalanced (for example, the ‘extremes’ of both preferences state on the one hand that people who very much prefer their instructions written will only work with written instructions, though those who very much prefer charts strongly prefer them, but will ‘make them from written if necessary’ suggesting, for some reason, that one group is more flexible than the other. Also, there may be a degree of user bias in that poll, as it was linked to from the Chart Haters Anonymous group where the poster linking the the poll stated ‘looks like we’re in the minority so I thought I’d spread the word here’, which isn’t entirely helpful when trying to gauge the feeling of a group of people, to have one interest group unbalance the bias of the respondents.


Now, if you have made it all of the way down to this part of the post and are still reading, and you happen to be a chart hater, or prefer your instructions written, or are comfortable with either, I was wondering if there was anyone out there with a spare skein of yarn (100g of fingering/4ply weight) who fancied doing a spot of test knitting for a free advance copy of the pattern? I know that the charted instructions read true (as I’m following the chart I drew up myself) but would like to make sure that the written pattern reads true. If nobody fancies it, that is fine, as I am sure someone in the Free Pattern Testers group will help out, but I thought I might as well ask here first. 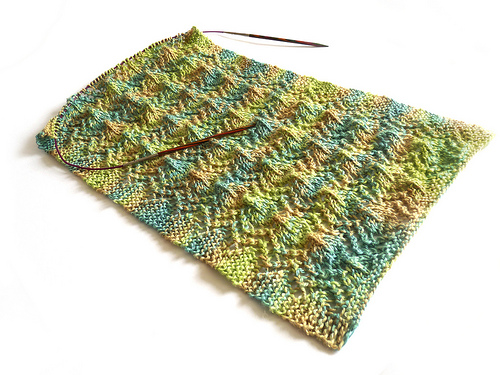 The pattern tester(s) wouldn’t have to knit the entire scarf (though it’s a nice pattern, so why not?) but a picture of a few (minimum of three?) repeats of the lace would be wonderful, just to make sure it is correct. And, you know, free lace scarf pattern and lots of gratitude will be coming your way. I anyone is looking for a relatively simple lace scarf project, and thinks that this one might suit what they are looking for, please could they leave a comment below, and leave either a way of contacting them or a link to their Ravelry Profile in the URL field so I can drop them a line.

15 thoughts on “Charting Your Progress”