Do you know what these are?

They are the level hazard icons from the videogame series ‘Portal’. Two of a set of ten icons designed to alert the player to what risks might lay ahead in that level. Mr awesome likes this particular game muchly, and it is one of the first games that we played together, so I thought it would be fun to stitch the entire set of ten icons and mount them in a long frame, in two rows of five, to hang in the bathroom of the flat I very briefly lived in with him last year, before we moved. 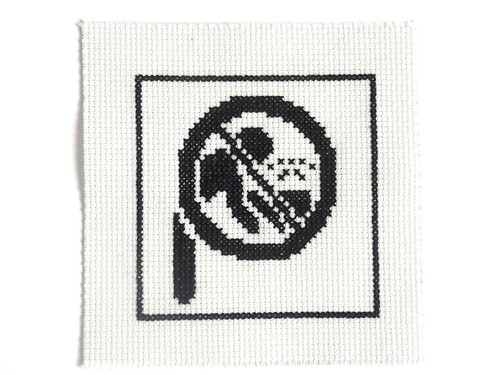 I put the idea to the back of my mind until recently. The bathroom is no longer the place for these as we have no extractor fan so it gets too steamy in there, but the idea is still a sound one, so I have started up my stitching. The original plan was to make it as a total surprise, but the amount of stitching in secret involved would mean that I never got to see him as I’d have to shut myself away for ages at a time, so I decided instead to show him what I had completed so far to see if the idea appealed to him and whether he’d want this piece of geek art hanging up in the flat anyway. 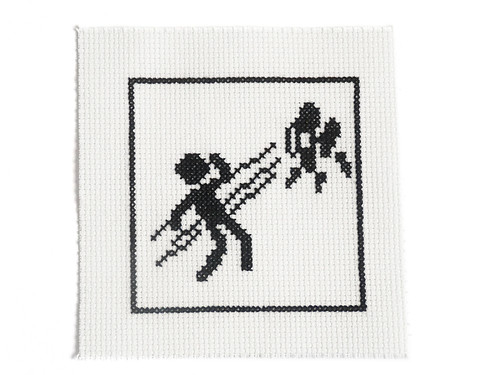 Of course he does! That’s great, as quite a lot of stitches have been made just for these first two icons, and secondly because if he said no I would shoot him with one of those turrets.

So, it turns out that this is a really exciting project for us both, and Mr Awesome is enthused. really enthused. I mean, what if it wasn’t just the icons, but the whole level wall display!

Hmmm… That’s be a LOT of stitching, thinks I, especially with that HUGE number that is cut off the top of the picture there. Still… it would look pretty spectacular. I can do the Aperture Laboratories logo in cross stitch, but I may think of another way of making the progress bar and level number. I’m not sure yet. It could be a simple case of finding some large format black card stock and a bit of deft work with with a craft knife, or maybe something else I have not yet thought of, but either way I will make it happen, and it will be marvellous. Marvellously geeky, but awesome. 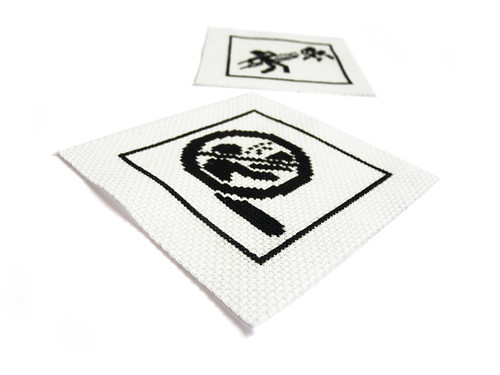