There are a number of new projects on the needles here at Castle Awesome, after a terrible case of startitis broke out at the end of last week. 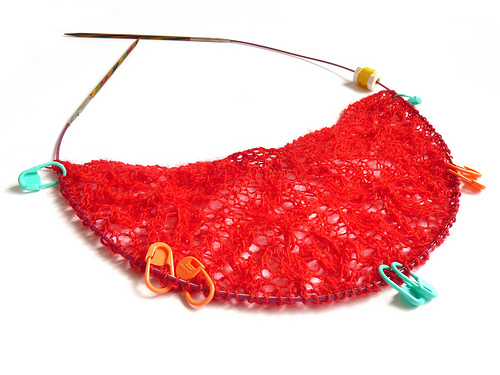 It Seemed only right that I should have a lace project on the needles after finishing my lace socks, because… Well, just because. So, I thought I would cast on something pretty with a beautiful Lace Zauberball in the ‘Cranberry’ colourway. 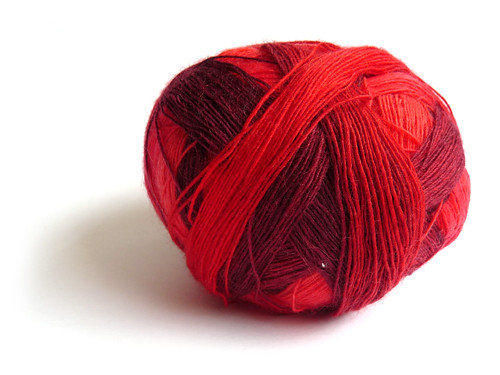 This wonderful yarn is a laceweight version of my absolute favourite yarn, the amazing Schoppel-Woolle Zauberball, with 800m to a 100g ball.

I didn’t really know what I wanted to knit with it, but it of course had to be lacy, and beautiful. I made use of the Ravelry pattern search to weigh up my options. I decided I wanted to knit a shawl (14,177 patterns for shawls on Ravelry), that I wanted to knit it with laceweight yarn (2,687 patterns for laceweight shawls) and that I had 800m of yarn to use (1,003 patterns for laceweight shawls using between 0-800m of yarn). I then decided that I wanted the shawl to be either circular or semicircular, which left me with 99 options. Looking only for patterns that were available for free or available to buy online reduced this to 83 shawls, and I finally remembered to specify knitting which then resulted in a choice of 79 choices, from which I finally settled upon Omelet.

I then promptly lost the link to the pattern as I didn’t realise that Americans spelled the word ‘Omelette’ differently to how we spell it in the UK, which follows the French word origin. So I had to retrace my pattern narrowing steps until I found the shawl again, (which is why I remember the route to finding the shawl so well).

I’m on to the second chart now, and my work is so far small and uninspiring, but I’m hoping it will be spectacular when it is finished.

My second new work in progress is a piece of colourwork. 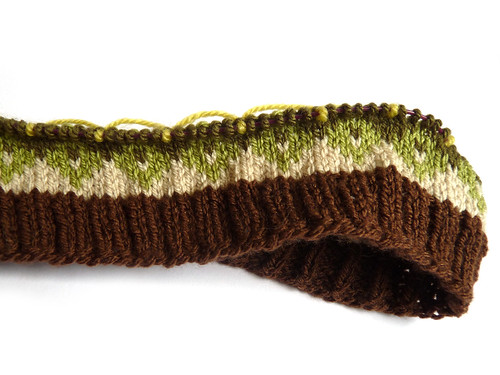 Again, I didn’t feel guilty about the spate of new things cast on because this is so very different to all of the other things that I am knitting (being a piece of colourwork), so I think it is very reasonable to be working on so many things at once when they are clearly all so different. I shan’t give too many details of this second new project as it is for a very special purpose, which shall be revealed soon…

6 thoughts on “New Works In Progress”