I spent an hour or so making a few cards, some of which were for upcoming occasions and some for no reason at all but which were basic designs handy to keep in the little occasions cupboard we seem to have put all of the wrapping paper and other festive sparkly stuff in. These cards feature one of the simplest shapes and yet most recognisable symbols of affection, a basic heart. Using an arrangement of three hearts which I had actually seen elsewhere and noted down, because I liked the way all three hearts peeped off of the edge of the card, I made four similar but quite distinct cards. 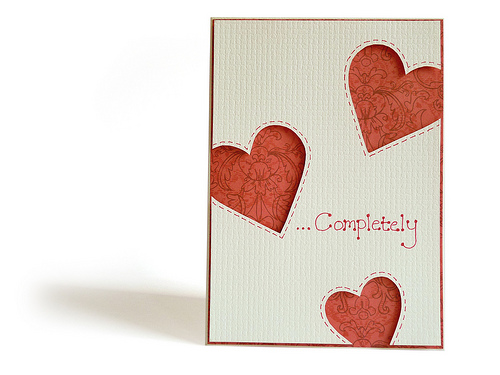 The first is perhaps the most romantic use of the heart, with a backing paper in red with an almost damask-style design on it, it would make a perfect valentine if you could wait that long to send it, but is perfect for anyone who just wants to express their love, and who needs a reason or special day to do that?

I then made two cards with a sheet of spotty pink backing paper. 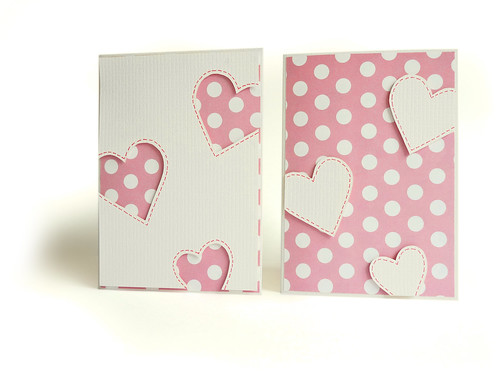 They use the other half of the same sheet of textured card used on the front of the first card. This sheet of card went a long way as the hearts cut out from two of the cards were stuck on to make the other two cards, so the hearts stand out positively from two of the designs and show through the cut apertures on the others. Excellent in both time and thriftiness, I think. There is no planned use for these two cards, but they would be perfect for a good friend’s birthday or to welcome any new arrivals of the smelly, screaming kind.

The last card is slightly different in style, but only through the use of the very graphic backing paper with the dark contrast and a bit of artist’s pastel dust which I have rubbed over the edges of the hearts for no other reason than that I saw them laying there and wondered what would happen if I used a paintbrush to brush some dust off of them and onto the card. 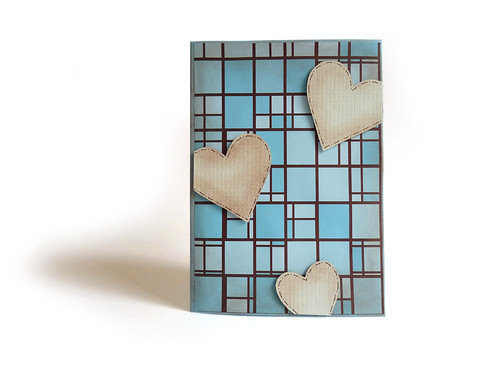 I really like the simplicity of all of these cards, though there is room for little sentiments or greetings on the fronts if needed in the future. I have left the ones that weren’t being given immediately blank for the meantime, ready for any message once and appropriate occasion comes along.