Travel Knitting and Kitchener On The Go

I hit the road with Mr Awesome for two days last week, whilst he visited various towns in various counties for work. They were long days with a lot of driving, and I travelled with him to keep him company during the long spans of time in the car. Whilst he visited various places for 20-60 minutes at a time, I stayed in the car with my audiobook with the thought of some wonderful distraction-free time to get some knitting done, and an excellent opportunity to get some extra knitting done on the three single socks of shame. 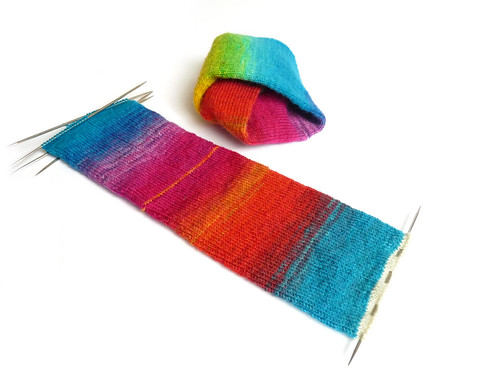 I decided cast on the second of the Magic Rainbow Socks for some mindless rounds of stockinette, but as I didn’t want to carry around too many different balls of yarn, or yet to sit down to add in the contrasting short-row sections for the heels and toes, I decided to leave those parts until the end. Towards the bottom-right of the above picture are three rows of white yarn, which I used as a provisional cast-on. I quite like to make a crocheted provisional cast-on, but as I travel with the bare minimum of knitting supplies (because I am forgetful) I often knit a few rows in waste yarn as a provisional cast-on instead. In the bright magenta section of the sock is a single row of orange yarn. This is a line of waste stitches which will later be unpicked, ready for a short-row heel to be knitted in place. As I have decided to leave the heel and toe knitting until the rest of the sock is complete, this really is the easiest of knitting projects, a continuos parade of knit stitches, a mindless carousel of travel knitting.
So that my mind did not turn to complete mush, however, I also bought along my half-completed Interlochen Cables sock for a bit of stitch variety. 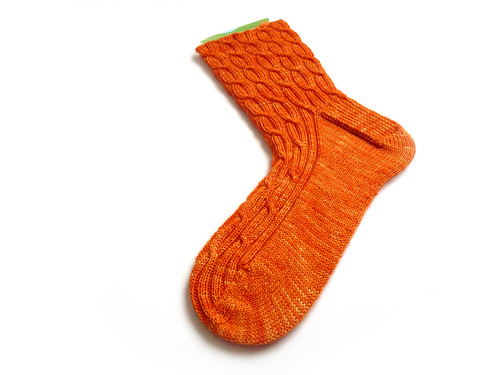 I completed the home-journey to the toe in a couple of hours and was ready to kitchener stitch the toe shut with a sense of satisfactory flourish when I realised that I did not have a tapestry needle with me (because, again, I am forgetful). I was be-moaning that I couldn’t ‘sign off’ this mini-victory of completing the first sock when helpful Twitterers @lilysunshine, @Turtlepurl and @PileOfSheep all pointed me towards a technique developed by Techknitter in which grafting the live stitches is achieved without the use of a tapestry needle, instead using the three knitting needles (perfect, as I had been working with DPNs). The needles are held he same way as when doing a three-needle bind-off, with one needle for each row of live stitches to be joined in the left hand and a third needle to work the stitches in the right. The yarn is cut to allow the end of the yarn to be pulled through each stitch and the stitches worked in a pattern of knits and purls on the front and back needles in turn, slipping some stitches from the needles and leaving some on until the next round, very much like traditional kitchener stitching. The results are speedy and simple, and great when your tapestry needle is feeling shy.
The only slight difference that I could see was that my stitches seemed to lean or bias slightly on the kitchenered row. 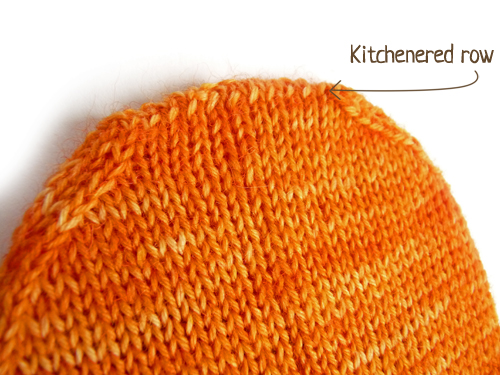 I don’t know if it’s the way that I knit it, but I’m really not worried about it at all. It’s on the very edge of the sock and may well straighten out when the socks are blocked, so I’ll definitely use this new discovery of Techknitter’s again, and can well see it being my new go-to way of grafting live stitches from now on.

You can read all about Techknitter’s Kitchener Stitch Alternative on her wonderful blog.

4 thoughts on “Travel Knitting and Kitchener On The Go”