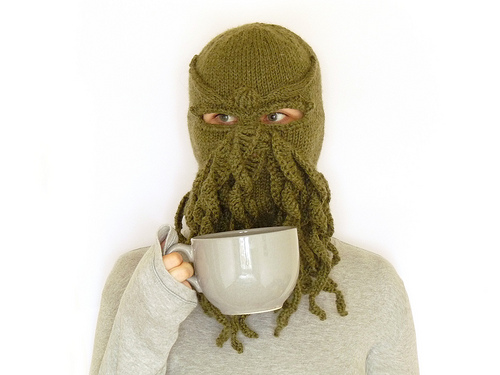 There are not many things I like more than a nice cup of tea, but it does dribble down my tentacles a bit. You can tell I’m English by the dainty bone china cup I am holding.
So yes, the Cthulhu mask is finished and is ready to be sent off to its new owner, who has already expressed some delight in this picture, so hopefully it will do down well. I took the picture with a nice cup of tea because some readers expressed some unease with yesterday’s pictures, and nobody with a fondness for a nice cuppa and a chocolate biscuit could be harmful.
This was a relatively fast project using both knitting and crochet as it was worked in Aran weight yarn and 5.5mm needles. The main body of the mask is knit, with the tentacles crocheted. The ‘eyebrow’ is made out of an iCord which is steadily increased in diameter towards the centre with a cluster of stitches forming the little bump between the eyes. None of the skills used in knitting and crocheting this pattern are ‘difficult’ but the pattern is really quite vague in the information it is trying to convey. It’s not a cheap single pattern at $6, and really has a lot of vital information missing, such as what type of increase is used  (it turns out, after experimentation, that it’s a kfb increase, so if you don’t guess at this all of your numbers very quickly fall out of place) and in various places the designer does not mention whether an instruction is carried out once or continued around the rest of the round.
The instructions for resizing the patterns amount to telling the knitter to work it out themselves, which is fine if you are an experienced knitter but is almost certainly rather confusing for less experienced knitters.
It’s actually a really fun project for the HP Lovecraft type geeks out there, but not a fun pattern to follow. I’ve added copious notes to my Ravelry project page in case anyone does get stuck with it, but hopefully the pattern will be amended.
OK, now I am going to post the picture where I tried to look a little more ‘mean’, because this is a monster, after all. 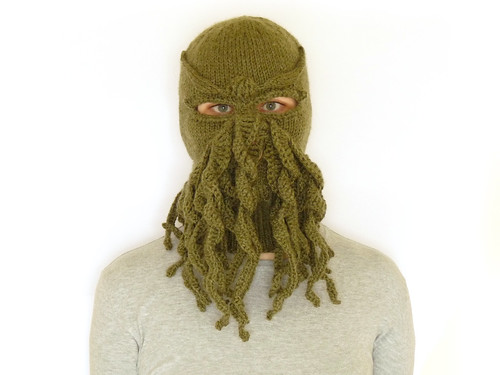