Knitting Your Own Sock Monkeys Without Knitting A Sock

As regular readers will know, Eskimimi Knits is a very monkey friendly place, sharing a few familiar faces with World of Monkey, and recently the world of knitting and monkeys collided once again with the arrival of the newest addition to the troup, Sockmonk. 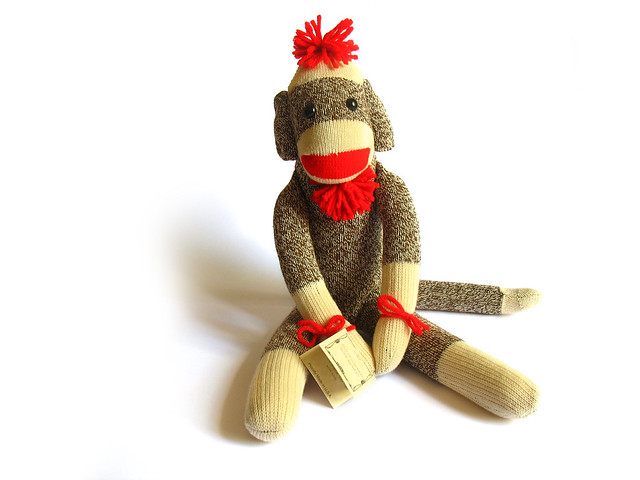 Sockmonk is a traditional red-heeled sock monkey and as such carries forwards a long tradition of sock monkeys, and I’ve been asking him a little about his family lineage and ancestry.

Sock monkeys are a traditional folk-art toy originating in the United States and Canada, where they are still most popular.

The traditional red-lipped, white-limbed, marled bodied sock monkey stem from the invention of what must have been a wonderful technology of the time – a machine that would knit seamless socks in the round, patented by the Swedish immigrant, John Nelson, who set up his business in Rockford, Illinois. Mass-produced, seamless socks targetted at workmen were extremely popular, due to the fantastic comfort that a seamless sock provides, and the market boomed. Soon enough there were plenty of copycat socks appearing on the market, trying to grab a piece of that same market. Nelson’s Rockford brand then decided to add their trademark red heel to their socks to mark them out as the original and best Rockford sock.

During the years of the American Depression, society reverted back to the make do and mend mentality and worn out clothes were re-patched or re-purpose, and some bright person soon cottoned on to using old socks to make small soft toys for children. The distinctive red heel of the Rockford sock make it an obvious choice for a characterful monkey, and the sock monkey phenomena was born.

In 1952 the Nelson Knitting company, makers of the Rockford red-heel, were made aware of the popular craft of turning its socks into soft toys and entered into a dispute over the design patent for the traditional sock-monkey pattern. Two years later they won the dispute and decided to use the monkeys to their best advantage. They were featured in a major marketing campaign and every pair of Rockford red-heeled socks came with a free pattern to instruct buyers on how to make their very own sock monkey, and the tradition was cemented.

Sock monkeys are still a traditional friend today, and their image can be found on many various kitsch items, from badges to hats, to compact mirrors, to small child’s tea sets. 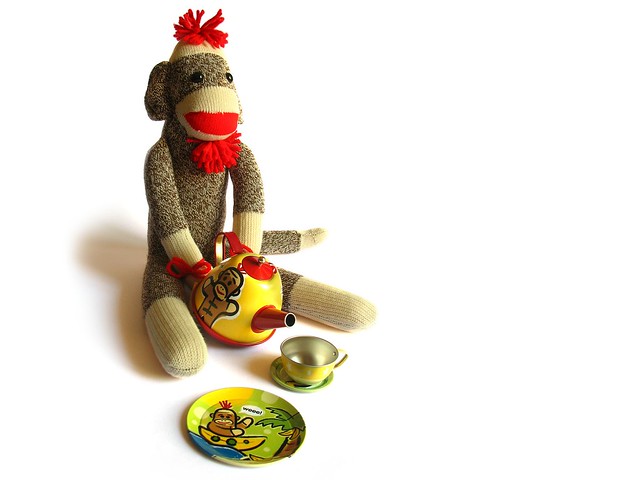 One of the stranger elements of the sock monkey history, though, have been due to a recent crafting trend reversal. Whereas necessity and then popularity once saw knitted socks being re-fashioned to look like soft toy monkeys, knitters are now knitting imitation sock-monkeys. Where it is of course possible to knit a pair of socks and then re-fashion these into a monkey chum, a number of designers have produced patterns in which the ‘sock’ step of a sock monkey is actually by-passed, allowing monkey-loving fibre fiends to get straight to the point and just knit the requisite parts to order. Because a sock is never made in this process whether the resulting monkey companion is actually a ‘sock monkey’ is a matter of debate, but they are often made to convey the traditional shape, style and colouring of a traditional Rockford sock monkey. It is only one more step from making a knitted sock monkey without the sock to also making one without the knitting, and taking up the crochet hook instead. 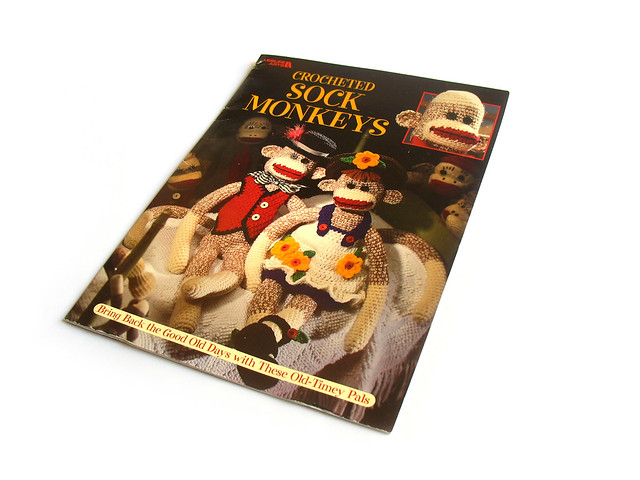 A Ravelry search on ‘sock monkeys’ returns around 20 patterns for making the monkeys themselves as well as numerous hats, mittens and baby leggings, all in the sock-monkey style, so if you are not as lucky I am as to have your very own sock monkey pal (thankyou, dear Lisa) you can always whip one up with your trusty needles or hook. I intend to crochet another addition to the monkey clan soon, but until then the monkeys are all welcoming Sockmonk into the clan, and asking if he brought any cake along with that delicious tea. 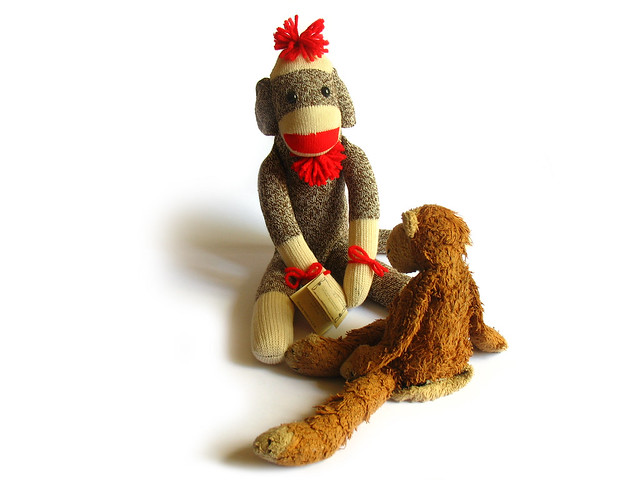