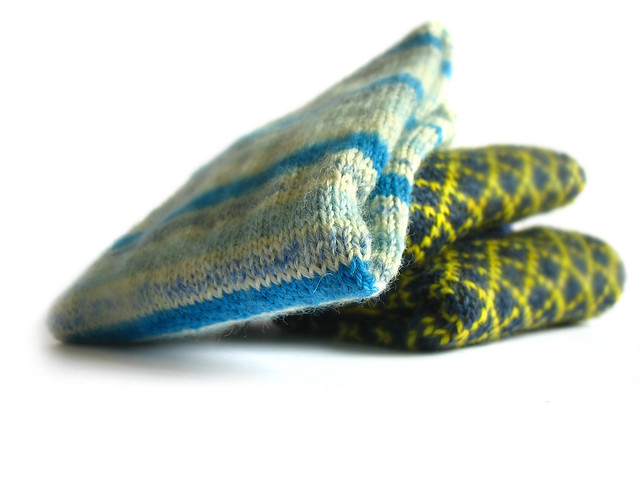 A lot of things are ‘half done’ at the moment and I feel the need to bring some of them to a finish to feel the satisfaction of a job well done. The good thing about having several Works In Progress on the go is that after a period of having no finished object to show you then find yourself with a whole avalanche of them, so I am casting on the second of each project today to at least get my foot on the stairway to completion. 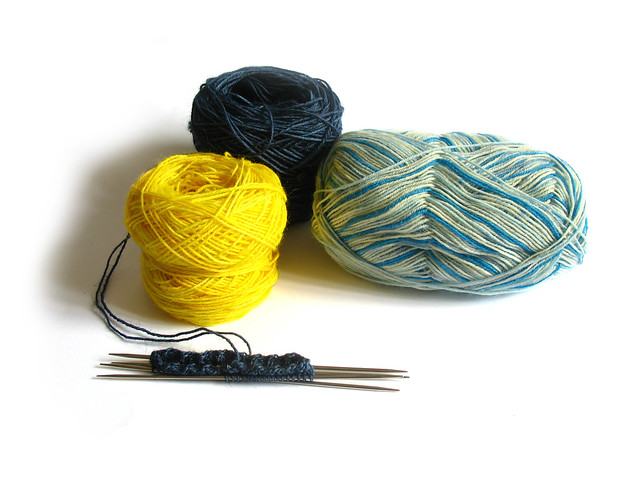 So, the eagle-eyed may notice that I have already knit two of the dark blue ‘things’ in the top picture, but the first was a test knit just to see if I could get my idea to work and was really me knitting along as the idea formulated so I could make various notes and adjustments along the way. As it was I decided to change the positioning of a few elements.

I’m sorry to only give these covert glimpses of one of my current projects, because there is nothing I like more than sprinkling my blog with loads of good, clear pictures and a lot of chatter about what I am making, but I am working on a new design and certain elements are quite complex to design and I want to be able to protect my design until it is published. There have been a couple of occasions recently where designers have released designs so close to my own that I have felt rather uncomfortable in the similarity, though I am sure that co-incidences do indeed happen, and as such I suppose I just want to protect myself by not giving any chance that someone will produce a pattern so very close to the one I am working on before I do, after seeing the progression of my new design.

Of course, once it has been knit and blocked, ends weaved in and all written up I will be ‘ta-da!’ing all over the place.

I have one more thing to show you – an ‘exciting’ addition to the Tardis that is my knitting bag. One of the other things that I always, always, always carry around with me is post-it note (or, really, their less-expensive equivalents). They are so handy – for marking pages in stitch directories, writing notes and errata/revisions on patterns and, if you find the little arrow shaped ones, for pointing to specific lines of patterns. So, you can imagine that I snatached these up when I saw them: 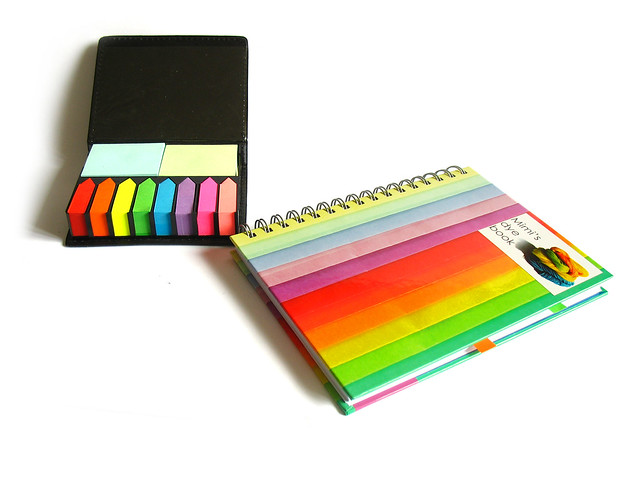 There are 1,600 little pointy sticky notes and 400 small rectangular ones, all in a little black sturdy leatherette case. Ok, we’ll forgive the leatherette and just look at the lovely sticky notes. Folks in the UK and living near a ‘Works’ stationery and book store may find them on sale there for the bargainous price of £1.99. Don’t pretend you’re not as excited as me when it comes to stationery. I know you are.