After a couple of false starts due to not being totally taken with the fabric produced by a 60 stitch cast on and 2.75mm needles and instead opting for a 72st c/o and 2mm needles (after having already knit three inches of each sock), all systems are ambling. I’ve only been knitting these socks in the odd quiet moment, so they aren’t exactly racing off the needles, but the pattern is starting to emerge: 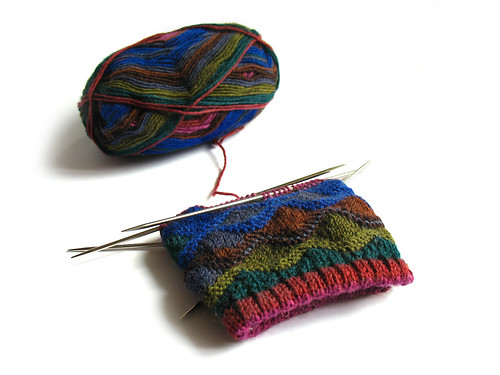 I have changed a few things – the stitch count, as mentioned, but also the ribbing, opting for a 2×1 rib which I always think just looks somehow ‘neater. Also, I made a super-stretchy comfortable cuff with no cast-on edge, because though it is a bit of extra work, I find it extremely comfortable. 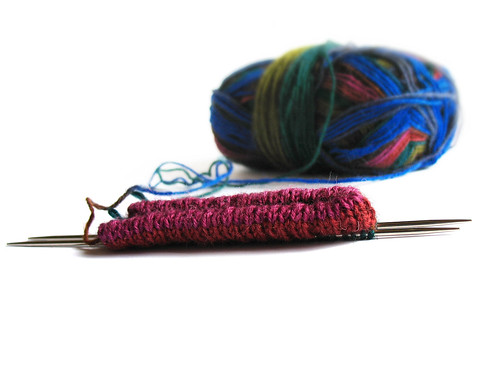 There are a few things that I really admire in this pattern, where the designer, Kirsten Hall, has made that bit of extra effort that sets and excellent pattern apart from the thousands of good ones.

The element that catches my eye from the start is the fact that the pattern does not dictate that you knit an inch of ribbing and then set about with the main motif of the sock. Instead, the ribbing flows down into the first row of half waves. You might be able to spot it in the picture above – the russet and rust colours of the cuff are in rib, but you will see that the wavy section in forest green also continues that same ribbing. It’s a small touch, but the excellence is in the detail, and it makes this relatively slow knit (for a pair of socks) worth the extra effort.

I’ve also included a small but popular knitting skill, a party trick to some, to cope with the small modular nature of knitting each ‘swelling’ one by one in short rows. Backwards knitting may be no more than a little knitting stunt to some, but it certainly comes in handy with tiny short-row sections such as these, or when knitting entrelac, so you are not juggling with your needles and having to turn your work every few stitches. It does look quite cool, though.